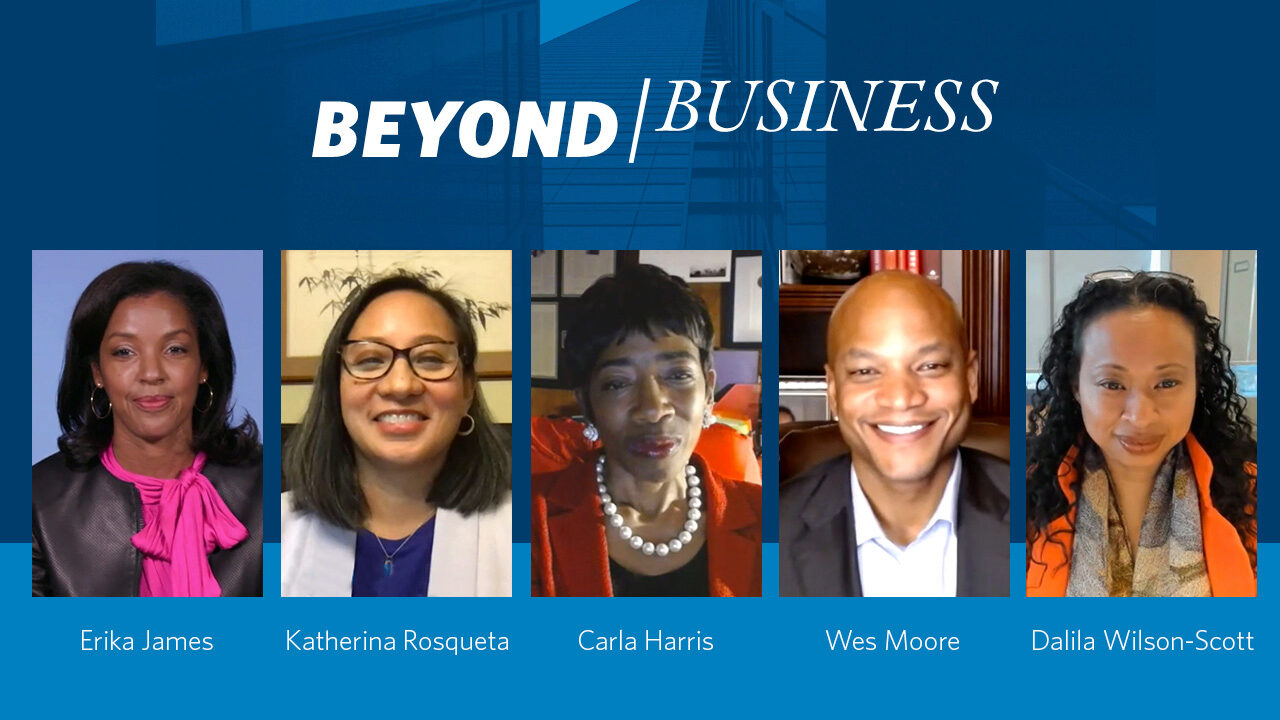 On Nov. 10, Wharton Dean Erika James hosted the discussion, “Race & Corporate Power,” the second of three in Wharton’s Beyond Business series, which tackles the complex and pressing issues affecting individuals and organizations across the world. Part of the School’s Tarnopol Dean’s Lecture Series, Beyond Business is streamed live on Wharton’s LinkedIn page. Katherina Rosqueta, founding executive director of Wharton’s Center for High Impact Philanthropy, served as moderator for the second discussion.

Please visit the Wharton Global Youth Program’s latest Explore Business mini-site for high school students to find the full hour-long video, as well as six separate video segments, and activities and worksheets related to the themes in the “Race and Corporate Power” discussion. We encourage you to also visit our mini-site built around the Dean’s previous discussion on “Race and the Entrepreneur.”

Below is a Knowledge@Wharton summary of some of the key points from the hour-long discussion.

It’s not the millions of dollars that Fortune 500 companies are funneling into new diversity and inclusion efforts that excite Carla Harris, vice chairman and managing director at Morgan Stanley. Nor is it the endless conversations about racial equity and social injustice, which she’s heard for more than 30 years in corporate America.

No, this moment feels different. It feels more powerful.

“Back in the early ‘90s for corporate America and for Wall Street, people thought about diversity as the right thing to do or the moral thing to do,” Harris said. “Fast forward 30-plus years, people are starting to really think that it is a part of the strategy, it is a part of being able to innovate, it is a part of any organization’s future.”

This moment in the perpetual fight for fairness also feels different to Wes Moore, a former investment banker and entrepreneur who is now CEO of the anti-poverty nonprofit Robin Hood.

There is a greater sense of “shared complicity” in the creation of systemic racism, he said, and a deeper understanding that it will take everyone working together to dismantle it.“There’s a hopefulness that I know I have now that, truthfully, I didn’t always have,” Moore said. “So, this moment is leaving me tentatively inspired.”

During the panel discussion about the role of companies and philanthropic organizations in addressing racial and social justice in the workplace, Moore and Harris were joined by Dalila Wilson-Scott, executive vice president and chief diversity officer at Comcast Corp. and president of the Comcast NBCUniversal Foundation.

Wilson-Scott, who previously worked at J.P. Morgan, said strong leadership is critical to advancing diversity, equity and inclusion (DEI), especially for Fortune 50 companies that have vast resources and access to global talent. Collaboration is also key; companies need to build private-public partnerships and even invite industry competitors to sit down at the table and talk though what’s working and what should be done differently.

“When we think about our employee channel, our supply chain, our investments in businesses, there are so many ways that Fortune 50 companies can stand up in this moment,” she said. “That’s important to note, but we can never forget that it takes a true partnership across sectors to move forward.”

Many large firms, including Morgan Stanley and Comcast, have launched or expanded multimillion-dollar DEI initiatives in the last six months as worldwide protests over the death of George Floyd, a Black man who was killed by police, drew attention to racial justice issues. James asked the panelists a tough question: Is this moment symbolic for companies to feel better about themselves, or will this become sustained change? 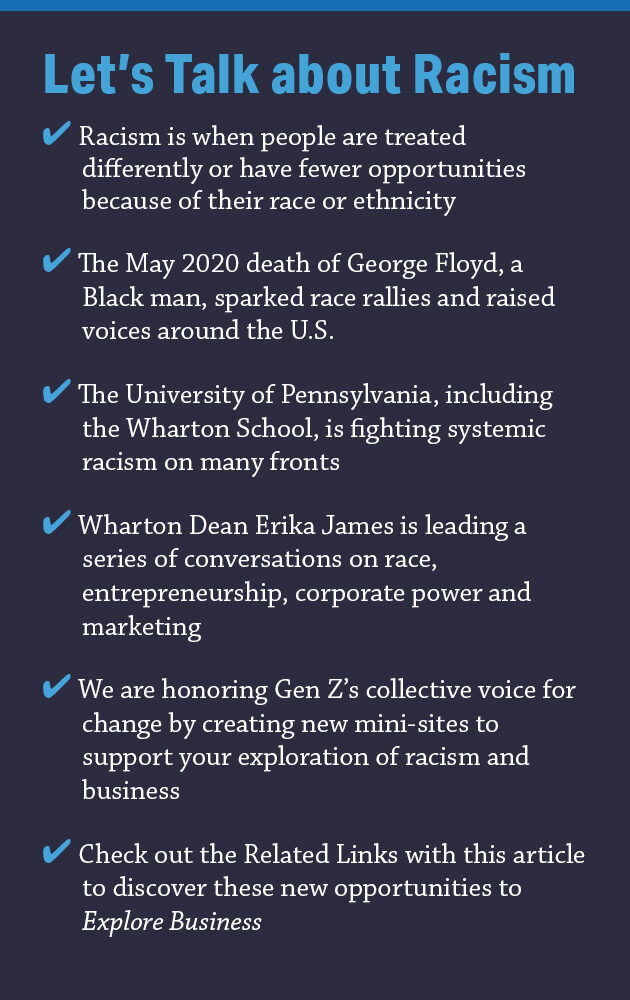 Harris said she believes the changes taking place now will have permanence because of one major reason — young people. They’re fed up with the status quo and committed to rewriting the narrative around DEI.

“The millennials and the [Generation] Zers are one of the primary reasons that this moment is different, because they have said no más,” Harris said. “They are looking at people in positions of power and saying, ‘Really, you had 50 years to get this right, and we’re still dealing with this? How can that be?’”

Harris also pointed out how technology, especially social media, has empowered consumers to create like-minded communities. Businesses used to have three constituents: shareholders, employees and customers. But she said social media has made “community” a fourth constituent, one that can use sheer numbers to effect change.

James, who is a mother of two teens and has spent her career around students, agreed that young consumers are “changing the conversation,” and sometimes there is a misalignment between what companies do and what young consumers want. “They are walking with their feet and they are saying, ‘This matters to us and we are making choices about the kinds of organizations we want to be affiliated with,’” she said.

Wilson-Scott said she doesn’t want to see the momentum slow down as time marches away from the death of George Floyd. It will take uncomfortable conversations, accountability and a lot of hard work to keep the pressure and focus on DEI efforts.

She said when managers leaned into the conversation this year, they heard some “shocking and surprising things” in listening sessions and safe-space discussions. Co-workers got to know each other in different ways and better understand their different perspectives.

“We didn’t just arrive on this moment. We’re talking about centuries of injustices,” she said. “Many Blacks in corporate America have to live in this duality to be successful.”

Wilson-Scott said those conversations must continue.

Harris agreed and said leaders must be intentional and vocal, no matter how uncomfortable, because their silence will be misconstrued as complicity. “Now is the time to express your courage,” she said. “The strand that holds all of those pearls of intentional leadership together is courage.”

The next Beyond Business lecture, “Race & the Selling of America” will take place on LinkedIn Live in December.

What are four key themes explored in the “Race and Corporate Power” discussion?

Do you agree with Carla Harris’s notion that Generation Z is one of the main reasons why this moment around issues of racial injustice is different? How have you personally connected to the themes discussed in “Race and Corporate Power?”

Beyond the fact that it makes them good corporate citizens, why is it so important for companies to pledge their money and their commitment to racial equity and justice?

One comment on “Discussing Corporate America’s Commitment to Racial Justice”