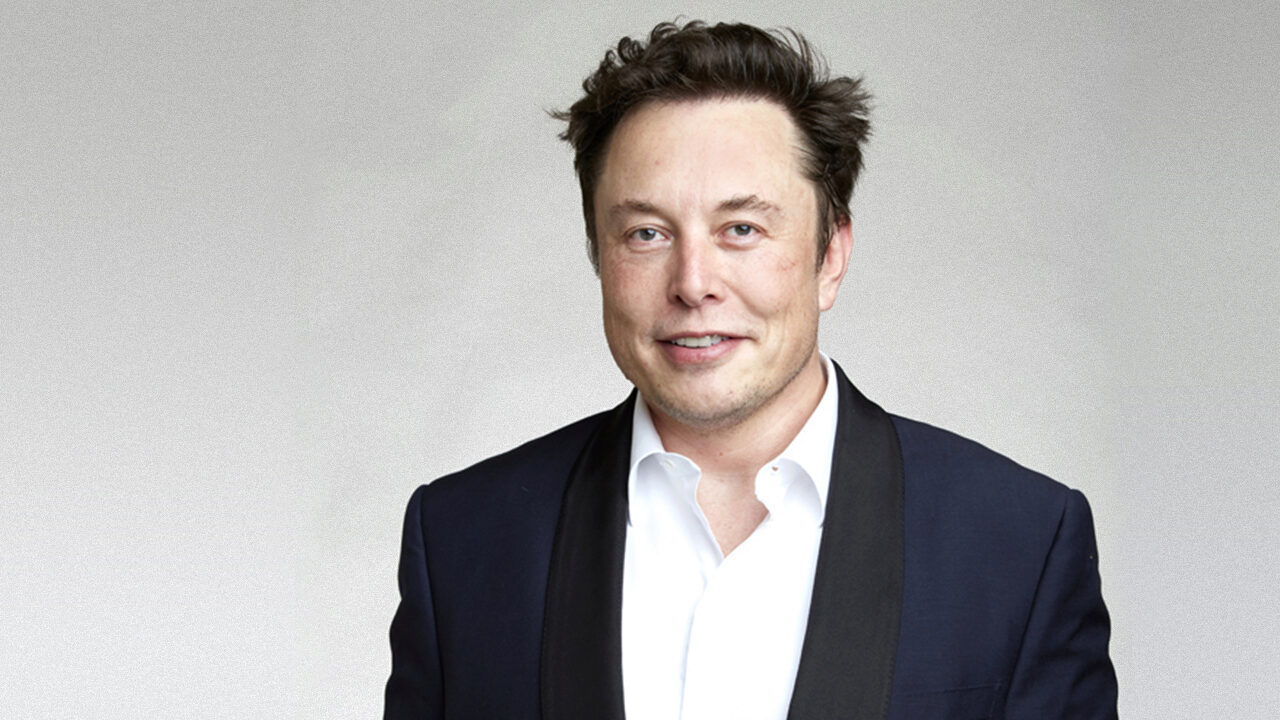 Andrew Raine, 17, is a junior at Friends Select School in Philadelphia. In 2017, he was a summer intern in the Character Lab at the University of Pennsylvania and in 2018 attended the Knowledge@Wharton High School Global Young Leaders Academy summer program, both of which inspired him to pursue further research about entrepreneurship. In this personal essay, Andrew talks about his experiences and presents his findings on curiosity, creativity and commitment.

According to Forbes magazine, nine out of every 10 startups fail. This inspires an important question: What dictates which startups fail and which succeed? At least part of the answer lies with who is leading the startup and whether or not that person has what it takes to be a successful entrepreneur. Successful entrepreneurs come in all shapes and sizes, and yet one of the burning questions in business has always been to decode the magic formula for success.

While I can’t say that I’ve discovered that formula, my experiences over the past few years have led me at least to a working hypothesis – that curiosity, creativity and commitment — what I call the three C’s – are important factors.

Commitment Alone Is Not Enough

It all began with an internship I had in Dr. Angela Duckworth’s Penn Character Laboratory two summers ago in 2017. I took away the idea that success of any kind is not just about intelligence, it’s about grit. In her book, Grit: The Power of Passion and Perseverance, Duckworth, a University of Pennsylvania professor of psychology, talks about having the mindset to stick with your goals.

Which kids are most likely to advance to the finals in the National Spelling Bee? Which cadets will go on to achieve military success? Which new teachers are most likely to become effective educators? In all cases, grit was the answer. People who are gritty, which is to say that they are determined to follow through and achieve what they set out to do in the first place, most often succeed. And grit predicts those various outcomes mentioned above better than many other factors, including IQ, good looks and health.

I know what you’re thinking. Winning a spelling bee is not exactly the type of success that entrepreneurs are seeking. But hearing that message about grit during my time in the Character Lab made me curious about whether grit or what I call commitment, was solely responsible for the world’s entrepreneurial success. Did other personality traits play equally important roles? These questions began buzzing around in my head during that hot summer – and they wouldn’t go away.

Cut to last summer, when I was part of the KWHS Global Young Leaders Academy on entrepreneurship, learning lots of new insights about innovation and even crafting a team-based plan for a start-up venture. I became even more motivated to pursue my questions about how grit influences entrepreneurship. I began speaking with the Knowledge@Wharton team and reviewing the existing literature on what is known about entrepreneurial success.

The empirical evidence was fragmented and was neither clear, nor compelling. I did discover, however, that commitment alone is not enough. Effective entrepreneurs are curious creatures – they are full of seemingly offbeat questions about the world around them. They are creative, with a mindset that is imaginative and inventive. And yes, they are indeed committed to their ideas. Here is the model that I developed in a research paper that I worked on all last year: 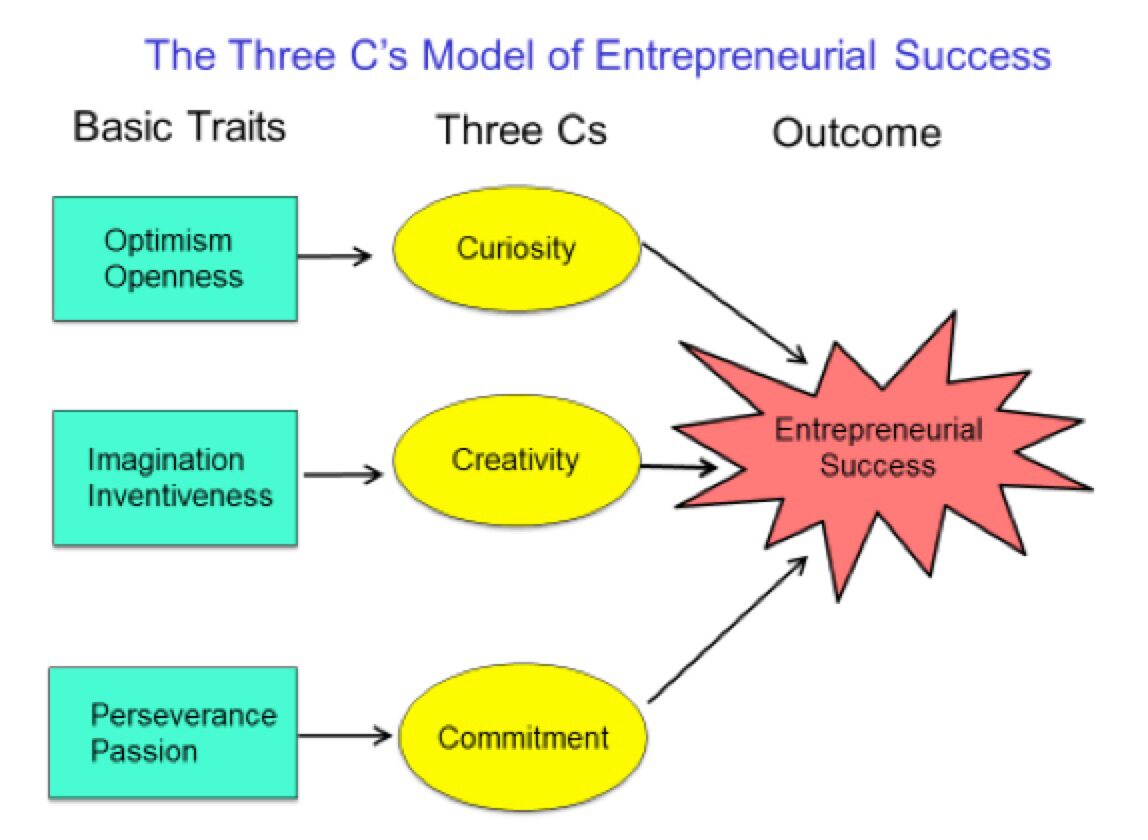 This is not pie-in-the-sky theorizing, but instead has a firm empirical basis – in other words, it is shaped through data-driven studies. Take the research published in the Journal of Business Venturing in 2017 by Brandon Mueller, a professor in the College of Business at Iowa State University. Using Duckworth’s personality measure, Mueller assessed grit in 244 entrepreneurs who personally managed firms and maintained majority ownerships. A year later, an executive-level employee of each company was asked to accurately assess the overall performance of the company through sales, profitability and net profit margin. A significant positive correlation was observed, showing that grittier entrepreneurs had companies with higher venture performance a year later, a relationship that held up after controlling for many background variables including demographics, startup experience and educational level.

I researched many empirical and theoretical perspectives from Duckworth’s book and other academics, including M.H. Chen, Y.Y. Chang and Y.H. Lo, who published a paper on “Creativity Cognitive Style, Conflict and Career Success for Creative Entrepreneurs” in 2015 in the Journal of Business Research. My exploration of this topic reached back to 2010, when J.R. Baum and B.J. Bird wrote about “The Successful Intelligence of High-Growth Entrepreneurs: Links to New Venture Growth” in Organizational Science.

I found the process of research and discovery fascinating, and it led me here to think about the application of what I learned in a practical context – who actually demonstrates the three C’s in their lives and their work? I turned to the Knowledge@Wharton High School online journal for inspiration.

Take, for instance, Hannah Herbst. Last year, at 17, she was one of youngest members of Forbes 30 under 30 class of what they call “brash entrepreneurs”. In 7th grade, Herbst was entered a summer engineering and technology camp, only to discover that she was the only girl. She had to build robots, which she had never done before. She desperately wanted to quit. But Hannah had perseverance, a building block to commitment, and that led her to stick with it. It also helped to cement her curiosity for engineering. Combined with perseverance, Hannah demonstrated the other building block of commitment — passion. She went on to develop an ocean energy probe prototype that uses ocean currents to provide power to developing countries. Small wonder that Hannah, with her perseverance and passion, was named America’s Top Young Scientist in 2015. Most recently this May, she won best of category at the Intel International Science and Engineering Fair for a translational medical science project.

In addition to commitment, creativity can propel an entrepreneur forward. Kai Kloepfer was a science-fair enthusiast from a high school in Colorado when a tragic event occurred 30 minutes from his house in a town called Aurora – the killing of 12 people at a midnight showing of the movie “Dark Knight Rises.” That got him thinking about a related issue – suicide and accidental deaths from firearms and what could be done to enhance gun safety in the U.S. His creative solution? A simple, yet ingenious way to prevent accidental misfires: fingerprint-secured firearms. He took the concept from smartphones and imagined how it could be applied to guns. With his new invention, Kloepfer (who is currently a junior at MIT) founded a company, Biofire Technologies, and was able to raise $225,000 from angel investors, a grant, and Silicon Valley advisers. Like Herbst, Kloepfer was also named one of 2017’s Forbes 30 under 30.

This curiosity piece is critical. To supplement my research, I started to look into one of the most well known entrepreneurs of our century, Elon Musk, founder of SpaceX and Tesla Motors – and before that, PayPal. Musk’s deep curiosity emerged at a very young age. As a child, he was reportedly so introspective that his own parents thought that he was deaf. His mother later found out, however, that Musk was constantly daydreaming about inventing things to do with space and rockets. His childhood curiosity was not just limited to daydreaming, though. At the young age of 12, Musk had already taught himself how to code and successfully created and sold his own video game. He demonstrated inventiveness, a building block for creativity, before he even hit his teenage years.

Musk has shown repeated grit or commitment in his entrepreneurial career. During the creation of his first IT company, Zip2, he had to work morning, noon and night, living in the warehouse where he had rented an office and taking showers in the locker room of a local stadium. His passion for his product led him to save every penny to persevere with his company and keep it afloat in its first two difficult years. When he was down to his last $20 million, he doubled-down on Tesla and saved it from bankruptcy at a critical point when less-optimistic entrepreneurs would have cut their losses.

Musk also has the futuristic imagination and inventiveness needed for creativity. Consider his Neuralink venture, a company aiming to merge man with machine to enhance our cognitive capacities by implanting an ultra-thin mesh into the human brain so that it can upload or download information directly from a computer.

All of this is to say that the three C’s are valuable personality traits for success in entrepreneurship. Reflecting on how Musk illustrates more than anyone all the critical qualities of successful entrepreneurship, I sense that my original model missed the mark. I previously highlighted curiosity, creativity and commitment as individual characteristics, each with its own power to fuel the entrepreneurial mind. Instead, it may be the interaction between these characteristics that captures true entrepreneurial success. Those entrepreneurs who are consistently curious, creative and committed have a fighting chance of driving their ideas forward and even being among that 10% of start-up successes.

Did Andrew Raine always like entrepreneurship? What awakened his curiosity to this topic and how did he pursue it further? What is empirical evidence and how did he use this to formulate his model?

What is grit? Using the Related Links, explore Angela Duckworth’s grit research and grit scale. Do you have grit? How have you personally displayed grit in your own life?

What qualities would you add to Raine’s Curiosity, Creativity and Commitment model? What other traits do you believe contribute to entrepreneurial success?

A Bank Account Is Your First Step to Financial Freedom