A new deal that gives Nestlé, the world’s largest food company, expanded access to the Chinese market has analysts wondering if the country is becoming more open to foreign investment. Marc Ross of the U.S.-China Business Council sheds light on China’s motivation for consolidation. …Read More 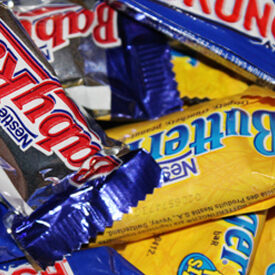 If you are a candy lover, chances are you have devoured your share of Kit Kats, Smarties and Butterfinger bars. Or maybe you have heated up a Hot Pockets for an after-school snack, eaten a bowl of Häagen-Dazs ice cream or even fed your cat Fancy Feast or your dog Alpo. If you have used any of these brands, then you know the company Nestlé. Nestlé, based in Switzerland with locations around the globe, is the world’s largest food company.

Back in July 2011, Nestlé offered to pay $1.7 billion for a 60% stake in Hsu Fu Chi, a Beijing, China-based maker of candy, snacks and the traditional Chinese snack sachima. This week – on December 7, 2011 – China’s commerce ministry approved Nestlé’s plan.

The deal – one of the biggest by a foreign company in China — is significant on a number of levels. First, it gives Nestlé expanded access to the Chinese market as it tries to build up the sales it gets from emerging markets — those countries that are experiencing rapid growth. What’s more, China has been notoriously cautious about foreign companies buying well-known local brands. For example, in 2009, China’s government rejected Coca-Cola’s $2.4 billion bid for Chinese juice producer China Huiyuan Juice Group, which left investors speculating that Beijing would protect local brands from overseas buyers.

The Nestlé-Hsu Fu Chi deal, along with an earlier deal involving Yum Brands buying Little Sheep Group that was approved by the Ministry of China in November, suggest that China is open to new business investment.

A number of factors, including an economic slowdown in China and Europe, are influencing the success rate of mergers and acquisitions (M&As) in China, says Marc Ross, director of communications and publications for the Washington, D.C.-based U.S.-China Business Council (USCBC), a non-profit organization of some 240 American companies that do business with China. While the Business Council represents only American companies working in China, it closely watches business developments impacting the Chinese marketplace. Ross spoke with Knowledge@Wharton High School about the Nestlé-Hsu Fu Chi deal.

Knowledge@Wharton High School: Were you surprised by this week’s news that the deal had been approved?

Marc Ross: Based on the business climate and the desire of the PRCG (People’s Republic of China Government) for more consolidation in major industrial sectors — steel, automotive and food for example — this approval was not a surprise. Outside of the sectors that the PRCG has not deemed protected — namely high-tech, oil and environment technology for example — you will see more consolidation.

Most of the consolidation will involve state-owned enterprises (SEOs). Sectors like mining and dairy are industries that are comprised of too many small operations that don’t have the necessary resources and wherewithal to scale nationally and lack the proper quality control standards. As Shaun Rien of Forbes has reported, the government feels it can oversee large operations better than networks of tiny entrepreneurs, and ensure food safety and decent working conditions. Consolidation has been a direct response to quality catastrophes — like the melamine in dairy products scandal — and an attempt to improve protections for laborers.

I always found this tidbit telling: there are one million trucking companies in China [that have] just two trucks – clearly this is a space ripe for consolidation.

It is important to note that many Chinese businesses are SEOs and were started to serve a marketplace limited to only a large city or province, not a nation the size of the continental U.S. There is a saying “there isn’t a national tea of China” – not surprising based on how most Chinese companies were created in the first place.

Western and American companies excel at retail and distribution on a massive scale — a skill set that many Chinese businesses lack. Chinese companies have only one goal, to secure better knowledge, technology and skills to compete in the most competitive marketplace on the planet — China. Often times this will require more M&As and consolidations of Chinese businesses.

The increasing cost pressures and inflation in China will affect industrial and business decisions. It is foolish to think of China as a low-cost business environment. The current economic slowdown in China as well as the uncertainty surrounding the Eurozone will no doubt improve the success rate of merger and acquisition transactions in 2012.

KWHS: Why would China seek to protect local brands from overseas buyers?

Ross: Due to various government regulations, opportunities for foreign investment are uneven across China’s commercial landscape. Though companies in many sectors can establish wholly foreign-owned enterprises, others are limited to joint ventures and minority stakes. Notable industries affected by investment restrictions are in key sectors such as agriculture, automobiles, chemicals, energy, express delivery, insurance, securities and telecommunications.

In 2011, the PRC government released a draft revised version of the Catalogue Guiding Foreign Investment in Industry, which categorizes foreign investment in various products or sectors as “encouraged,” “restricted” or “prohibited.” Ownership restrictions are imposed in many sectors, including those in the “encouraged” category.

KWHS: The two recent deals with China are notably food-related. What does that say about China’s food industry

Ross: Based on polling I have seen, the number one topic of concern for Chinese citizens is food safety. The ability to eat food that won’t make you ill is always on the minds of the Chinese.

As reported recently by the Economist [magazine], the government is nervous about the public’s deep mistrust of its ability to supervise the food market. On October 19 of this year, Prime Minister Wen Jiabao chaired a cabinet meeting that acknowledged, according to a government release, “great public dissatisfaction” with a lack of honesty in commercial dealings and called for stepped-up efforts to teach people sincerity.

Western and American companies working in the food space will certainly have more opportunities to operate in China. Already Yum brand’s KFC is the number one national restaurant chain in China, and leading U.S. companies like PepsiCo, Coca-Cola, ADM and Cargill have made major commitments to the Chinese marketplace.

KWHS: Will we start to see more foreign investment in China?

Ross: Yes. China will be an essential market for multinational companies for decades to come.

USCBC annually surveys its member companies to ascertain the state of US-China commercial relations as well as operating in China. Despite rising costs, companies are committing more resources to their China operations. This increased commitment reflects the fact that 93% of respondents affirm that they are in China to reach the China market, not use the country to serve as a low-cost export platform. Cost increases are part of the landscape in China’s fast-growing economy. Based on this year’s report, USCBC’s members continue to experience healthy market growth in China.

One comment on “Of Chocolate and China: Nestlé Expands in Beijing”