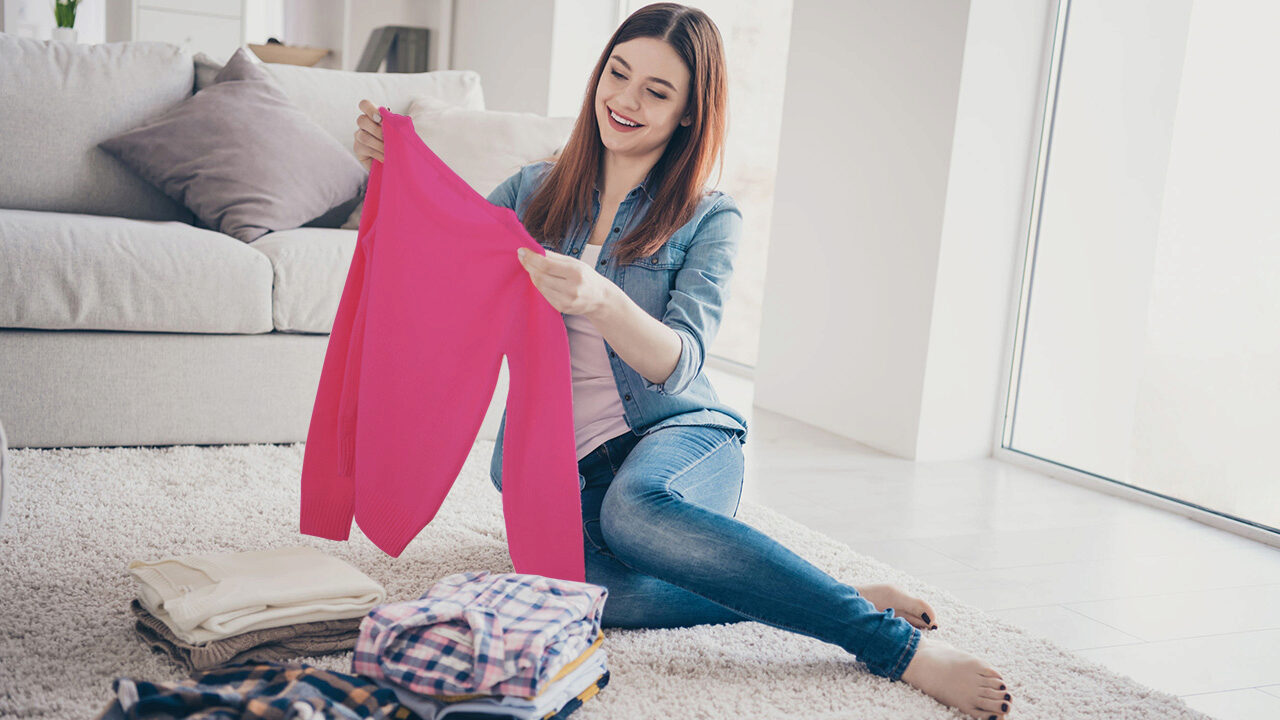 On the cover of the January 2020 issue of British Vogue, Taylor Swift is wearing a tweedy Chanel jacket that’s about to celebrate its 15th birthday.

You might assume that pop star Swift chose this jacket as an homage to one of her biggest-selling songs (“Cause when you’re 15 and somebody tells you they love you, you’re gonna believe them.”). But other factors actually influenced her fashion choice. The magazine’s editor-in-chief, Edward Enninful, picked the jacket from one of the fashion house’s 2005-2006 collections because he wanted to make a statement: Fashion is no longer disposable.

“With the global climate crisis, we all have to do what we can to contribute to the conversation around sustainability,” Enninful told the magazine. “Buying better and buying less is what I believe in…. The best clothes can be worn time and time again….”

While most of us won’t ever get to shop Chanel’s closet, it’s easier than ever to build a wardrobe from items that are “new to you.” Online retailers that focus on used clothing and accessories, including Depop, Poshmark and ThredUp, are redefining a sector that used to be dominated by catchall websites like Ebay, small vintage and consignment shops or Goodwill. And much of these “recommerce” sites’ popularity is being driven by younger consumers who want to make a statement with their fashion while also being sustainable.

“It’s so easy as a shopper to pick and choose what companies you’re going to buy from,” says Rachel Bang, 17, and a senior at Valencia High School in Placentia, California. Bang, a self-proclaimed fashionista who for years spent hours getting lost in her Project Runway Design Sketchbook, has made it a personal mission in high school to mitigate the waste produced by the fashion industry by shopping at thrift stores and at all the online recommerce sites. “If that decision is in my power, I’m going to support the brands I know are selling used clothes, which is more sustainable than new clothes or clothes that are made cheaply by exploiting labor.”

The New Face of Thrifting

Recommerce has been able to grow due to a series of Gen Z-inspired changes in technology, retail and customer mindsets, including a push to be more environmentally friendly.

Ten or 20 years ago, consumers would buy and quickly discard trendy styles from “fast fashion” giants like Forever 21, Zara, or H&M and very little information was easily available on how doing so impacted the environment. ‘Going thrifting’ often meant having to dig through unorganized piles of clothing at a local vintage store or Goodwill.

“Ebay was probably the first major consumer-to-consumer platform for reselling items and vintage items, but it’s fallen out of favor with younger consumers,” says Keith Niedermeier, an adjunct marketing professor at Wharton. “The platform is just not super appealing and it sells everything. These newer platforms are designed in a much slicker, social media-friendly way.”

Wharton marketing professor Barbara Kahn credits Rent The Runway, with removing some of the stigma around used or borrowed clothing. “Rent The Runway has actually made the process cool,” Kahn says.

The vintage or older items many recommerce sites carry are also very on trend, says Niedermeier, who is dad to a 15-year-old and 18-year-old. “Nirvana T-shirts are all over high schools again,” he points out. “The value of actual old-school Guns N Roses and Nirvana T-shirts is hundreds of dollars.”

And thanks to the internet, these days it’s easy to unearth sobering stats like this one: The average American throws away 70 pounds of clothing, linens and other textiles every year, with most of it ending up in landfills, according to USA Today.  And H&M, Madewell and The North Face are just a few of the brands that offer customers rewards for bringing clothes into their stores to be recycled.

“Customers maybe 10 years ago were not aware or concerned [about what happens to textile waste], and now they clearly are,” says Wharton marketing professor Santiago Gallino. “Even if you’re a fast fashion brand that sells primarily new clothes, you need to think about how to communicate what happens to the garments that don’t sell.”

Gallino says consumer interest in slower fashion and the success of recommerce may also lead mainstream retailers to start rethinking their strategies.

“It’s possible some retailers will take a path of moving into a less fashion-oriented, higher-margin and more expensive product,” Gallino says. As an example, he pointed to Patagonia, which expects people who buy its clothes to pay a little more, but wear the items for years. “This is a business model that resonates with customers. The question is whether fast fashion can migrate, not the extreme of Patagonia, but to a cycle of less following the trends week by week and if so, can they do it in a way to still make reasonable profits.”

However price consciousness is another factor driving consumers to think about buying used clothing or accessories. It’s easier than ever to compare prices of different items, and unlike older consumers, Gen Z has never had to wonder if they could get a pair of sneakers or a coat cheaper somewhere else – they can find out quickly and easy with their mobile devices.

“Gen Z compared to earlier generations is definitely very price conscious,” says Niedermeier. “They’re digital natives and they’ve always been big price checkers. It’s very easy for them to access price information on anything they buy. Resale sites are catering to buyers who want to get cool higher-end stuff at a lower price, so this aligns with that part of their consumer behavior.”

In addition to wanting to be more sustainable in her choices, Bang’s evolution from avid mall shopper to dedicated thrifter was in part due to a need to find more affordable clothing and in part because she wanted to find items that were more unique.

“When I was around 13 I loved shopping at PacSun and Brandy Melville, but all the clothes I was buying looked the same as every girl around me,” she says. “I didn’t really like that. When I go thrifting, no one else is buying the things that I buy. Everything is one of a kind. That’s what makes it fun and I know it’s like that for me and for my friends.”

Each recommerce site works a little differently. For example, ThredUp sends sellers a cleanout bag in the mail and pays for them to send it back. The RealReal works similarly, but has added a layer for authentication to make sure the designer goods sent by prospective sellers are the real deal. Poshmark and Depop are built more like social platforms, where sellers create their own digital storefronts and build a critical mass of followers. All of the sites keep a cut of the profits from sales.

“These companies have been savvy about trying to integrate everything we’ve learned in the last several years about creating a rewarding customer experience,” says Gallino. “These companies have two customers: The customer who brings the clothes to be sold and the one who shows up to buy them. They need to be conscious about both.”

Shoppers in the United States spend about $3.8 billion at retail stores each year. While recommerce counts for just a tiny piece of that — $24 billion last year – sales are expected to more than double to $51 billion by 2023, according to research done for ThredUp, The Wall Street Journal reported.

Consumers’ interest in recommerce is driving investors to take notice as well. The RealReal, which focuses on luxury goods, debuted as a public company on the stock market earlier this year and has a market value of more than $1.3 billion. Depop raised more than $60 million from investors in 2019 that it plans to use to expand in the U.S., its second biggest market after the site’s base in the U.K., and to ramp up its technology with better recommendations and image-detection algorithms, according to TechCrunch.

In addition to sites dedicated to recommerce, social media platforms like Instagram and Pinterest are also getting in on the act by making posts more “shoppable” so users can buy something they like without leaving the app.

The integration of social features also points to another big thing that’s driving the recommerce and clothing rental trend: Customers just don’t care as much about owning things, Kahn says. “What matters is the photograph and the posting on social media; you don’t have to own it if you took a picture of it,” she points out.

Bang’s favorite sources for recommerce are Depop, Instagram and Poshmark because the sites are more curated and usually have real people modeling the items for sale. She sells vintage items through an Instagram site and notes that, “if you just put up pictures of the clothes, they won’t sell.”

“… On the flip side of that, I think one reason why Thredup does so well is that it does appeal more toward older generations,” Bang says. “My mom really likes using sites like Thredup or Goodwill’s online site, but she never uses Depop or shopping through Instagram. It’s just a generational thing.”

Recommerce sales are expected to more than double to $51 billion by 2023. Do you think the mall is going out of style? Why or why not? Debate this issue in a group and with your classmates.

Research suggests that the average American throws away 70 pounds of clothing, linens and other textiles every year, with most of it ending up in landfills. Have you thought much about this issue? Do you believe that it’s possible to be both fashion-forward and sustainable at the same time? What needs to happen to change or reform America’s throw-away mentality?

4 comments on “Fashionista Environmentalists Shop ‘Recommerce’ Instead of the Mall”