In the next few weeks, Alexandra “Alex” Kukoff, a 14-year-old entrepreneur from California, will begin reviewing designs submitted by engineers to create a special pair of closed-captioning glasses for hearing-impaired moviegoers. It is a story of how a new entrepreneur with little technological expertise can use the Internet to make the necessary high-tech connections to turn an idea into a prototype [an early sample or model built to test a product or concept].…Read More 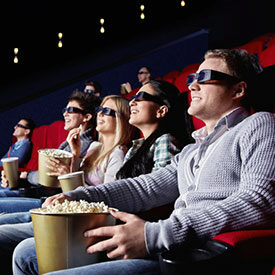 Alexandra Kukoff, 14 and a high school freshman from Thousand Oaks, Calif., enjoys going to the movies with her friends and family. Several months back, she hit the local theater to see “Taken 2,” where she and her family munched on Kit Kats and mixed M&Ms into their tub of buttered popcorn. While she could taste her movie experience, hearing it brought special challenges. Kukoff is missing two out of the three bones in her left ear, leaving her with limited hearing. That means she can’t always pick up dialogue in the midst of loud noises, action scenes and foreign accents.

Maybe it was during that screening of “Taken 2” or another movie that an idea began simmering in Kukoff’s subconscious. Why not find a way to improve the quality of her cinema visits? Kukoff now has a plan that could improve the movie-going experience not only for herself, but also for 36 million deaf and hard-of-hearing Americans, plus people with autism and other sensory disorders. “My idea is to create a pair of glasses similar in design to 3D glasses that will allow closed-captioning for any movie to appear at the bottom of the lens,” she says. Unlike movie screenings that have the captions displayed on the screen, which must be specially scheduled by theaters and can be hard to find, Kukoff says that these glasses would be available for moviegoers to use at any screening in the world, or even at live theater performances, meetings or museums.

Though she knew she was onto something, Kukoff quickly realized she needed some technical reinforcements to help make her glasses a reality. After doing research on engineering firms, in December 2012 she found GrabCAD, a Boston-area startup that offers a virtual community for mechanical engineers to collaborate on projects and share their expertise. In other words, it is an online open engineering platform that gives people the tools, knowledge and connections they need to build products faster.

Typical GrabCAD clients include mechanical engineering or design firms that have an idea sketched out but need some engineering work to come up with a prototype. Kukoff wasn’t even that far along. Luckily, her plea for help – which she sent to GrabCAD’s general email account – hit the firm at the right time. Community manager Sara Sigel says the company was on the brink of launching a new collaboration tool on its website, and Kukoff’s idea seemed like an ideal way to take it on a test drive.

“We were wanting to stretch our tools, so we thought it would be great if we could see this product from its idea stage all the way to producing a prototype on our platform,” notes Sigel. GrabCAD threw the idea open to its community, creating a challenge for its members to come up with a design for Kukoff’s closed-captioning glasses. More than half a dozen engineers have responded so far; after the four-week challenge period is done on April 23, Kukoff, Sigel and others will review the submissions and work to find the best option.

Not only is this Kukoff’s first entrepreneurial effort, it’s GrabCAD’s first pro bono challenge. Sigel says that the firm’s clients usually have to pay several thousand dollars to submit an idea, but the company decided to make the glasses the first of what they plan to be many community service projects. “I thought it was an amazing idea,” Sigel says. “We wanted to support her mission and idea and help her take advantage of our community of engineers. … She knew the pain [of hearing challenges]. She had the idea, and that’s where we started.”

Kukoff has a long way to go before her glasses hit the multiplex: Not only does she have to find funding to get them produced, she will have to find an “in” with Hollywood studios and megaplex owners to convince them that her idea has merit. “I’m aspiring as high as possible at this point. At the end of this year, I’d like to have these out in the open, to get people knowing about them,” she says. “Right now, I’m focusing on the glasses. I’m trying not to put the cart before the horse.”

‘My Story Had an Effect on People’

While Kukoff is new to the business world, she is no stranger to ambition. She is already working on a college degree at Moorpark College in Moorpark, Calif. By the time she’s 18, she plans to be graduating from both Oak Park Independent School – her high school — and have an associate’s degree before moving on to finish her bachelor’s degree.

She is also a published writer, winning Seventeen magazine’s short fiction contest in 2011. Her personal essay on hearing loss, “Glittering Pixie Dust,” won an honorable mention in the 2013 California Art and Writing Awards. Her essay also will be featured in an upcoming ebook anthology through The New York Times Learning Network. “I never imagined myself doing anything like this. I am still very much into writing, but after one of my essays was honored, I just knew that my story had an effect on people,” says Kukoff. “I don’t know if I want to ultimately be an entrepreneur or an inventor, but I definitely want to keep reaching out to the community and helping people.”

What is Alex Kukoff’s entrepreneurial idea? Why did she come up with it?

What is GrabCAD? How does it work?

If you were Alex, how would you prepare to collaborate with a community of mechanical engineers who are interested in your idea? What questions might you ask? What knowledge would you need going into the meeting? What might be some of the challenges in speaking with them?