Red Velvet Revolution: The Rise of the Cupcake Entrepreneur

Got a sweet tooth? You’re in luck. These days, cupcakes are playing a starring role at pastry shops across the country – from teen-owned business City Cupcakes, to Zoe's Place, a nonprofit organization that provides services and support to teen mothers or mothers to be. Oh, and don’t forget the excitement of The Food Network’s "Cupcake Wars", delicious and dripping with drama. These sweet treats have become more than just a passing fad.…Read More 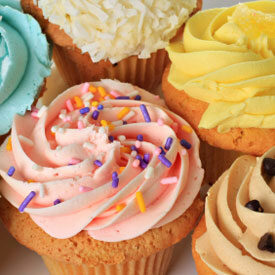 For Lauren Ball, cupcakes bring to mind childhood memories of trips to the bakery and birthday parties topped off with frosted treats big enough to pack a punch for any sweet tooth — but small enough that she didn’t have to share with anyone else.

But the 17-year-old from Escondido, Calif., also knows that cupcakes represent a lot of hard work. A year ago, Ball and friend Sawyer Epp, also 17, started their own business baking and selling cupcakes for special orders and at local farmers markets. Thousands of chocolate, vanilla and red velvet cakes later, Ball advises any aspiring baker to “take the amount of work you think it’s going to be and double that — or triple that.”

When they started out, it took the teens about seven hours to make 100 cupcakes. With experience and the discovery of some time-saving tricks (such as measuring out the ingredients at home before heading to their rented baking space) they could churn out 300 or 400 cakes in about four hours. Ball and Epp had to get all the permits and licenses required of food vendors in their area. They tested different brands of cocoa and vanilla to determine which brands made the cupcakes taste best. “That’s what it really takes to be successful,” says Ball. “Anything worth doing is going to be hard.”

Colors, Competition and a Cause

These days, cupcakes are playing a starring role at pastry shops across the country, and Ball and Epp’s City Cupcakes is just one of the businesses feeding the craze. Cupcakeries run the gamut from stores offering treats in classic flavors, like chocolate and vanilla, to those peddling more exotic tastes, including margarita and sweet potato (both of which have been on the menu at SAS Cupcakes, which has locations in Delaware and North Carolina.) Bakers are selling their cupcakes via blogs, Facebook and Twitter, and from traveling food trucks.

Some entrepreneurs are combining cupcakes with a cause. At City Girl Cupcake in Providence, R.I., any profits that don’t go back into the business are donated to local and national charities. Extra cupcakes — all of which are organic, nut-free and baked with locally sourced ingredients — are donated to the local Ronald McDonald House. Founders Catherine Corrente, 16, and Isabella Veader, 15, go to a school where community service is emphasized “and we both wanted to bring that into what we did when we sold,” Corrente says. “We’re both extremely fortunate, so we wanted to give back.”

In Teaneck, N.J., all of the profits from the cookies and cupcakes sold at Zoe’s Cupcake Cafe go to Zoe’s Place, a nonprofit organization that provides services and support to teen mothers or mothers to be. Clients of Zoe’s Place also work at the cafe, operating the cash registers and helping a professional pastry chef with the baking. “I think the colors are what attract everybody — all the different frosting colors and sprinkles and decorations,” says Christian Mims, 17, who works at Zoe’s. “Then you taste one and you want to keep going back.”

Cupcakes are even at the center of their own show on the Food Network. To win Cupcake Wars, bakers battle a ticking time clock to earn top scores from a panel of judges for taste, style and presentation. “I’d rather have dessert than dinner,” says Jasmine Frank, who competed for a chance to cater a vintage fashion event on an episode that aired last summer. The 19-year-old Woodland Hills, Calif., resident bakes cakes, cupcakes, cookies and cheesecakes to order through her online business, Jazzy Cakes. “When I started looking at culinary schools, people thought I was crazy. I had a 4.0 my whole high school career and people asked, ‘Why aren’t you getting a full ride to a university?’ but somehow I had a vision … that this was what I was meant to do.”

Made With Love — and Business Savvy

Many foodies trace the cupcake trend to a 2000 episode of Sex and the City where Carrie and Co. made a pilgrimage to Magnolia Bakery in New York City. Since then, however, the sweet treats have become more than just a passing fad, says Rick Bittner, executive director of the Retail Bakers of America in McLean, Va. When Bittner owned a bakery 15 years ago, he sold many full-sized cakes but very few cupcakes. Since then, however, consumers’ interest has shifted toward smaller, more inexpensive treats that can be eaten on the go. “[Cupcakes] are a trend, but there are trends that become staples,” he says.

With so many cupcake businesses popping up in both large cities and small towns, aspiring entrepreneurs need to carefully research potential markets, rely on mentors for both business and baking tips, and get creative when it comes to marketing and advertising, Bittner suggests. “The people who are successful create something more than just a product in a display case. Going to their stores becomes an experience.”

We hear this so often: “Anything worth doing is going to be hard.” What does that expression really mean? What does it say about ambition and work ethic?

In thinking about this article through an Economics lens, consider the following questions: (1) What are the scarce resources involved in running a cupcake store? (2) How does scarcity affect customers? (3) How does it affect the store owner?

33 comments on “Red Velvet Revolution: The Rise of the Cupcake Entrepreneur”