In the summer of 2011, Luis Iván Cuende García, who is now 16, walked away with the top prize at HackNow, a competition for young European techies. His winning entry, Asturix On, is a distributed web-tech based desktop that shows great promise in the world of distributed personal computing. In basic terms, it is a desktop environment that is, as Cuende García puts it, “based on the latest and most rocking web technologies.” He talked with Knowledge@Wharton High School about his life and challenges as a teen tech entrepreneur.…Read More 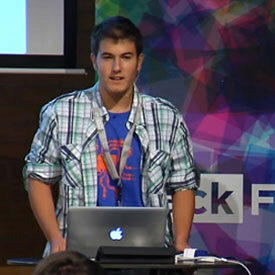 In 2008, when Luis Iván Cuende García was 12 years old, he thought that his region of Asturias in Spain needed a distribution channel for Linux, the computer operating system that is based on free and open-source software. So Cuende García created Asturix, an open project based on the philosophy of free culture. His distribution of that product throughout the region increased as a result of his innovative spirit and tenacity; his product was the first operating system to use facial recognition during the customer log-in process – no password needed.

In the summer of 2011, Cuende García, who is now 16, walked away with the top prize at HackNow, a competition for European developers who are 18 and younger. He won a new Android phone, 5,000 Euros and a chance to present his technology at Build 07 in Berlin, a forum for Europe’s best tech entrepreneurs and investors. His winning entry at HackNow, Asturix On, is a distributed web-tech based desktop that shows great promise in the world of distributed personal computing. In basic terms, it is a desktop environment that is, as Cuende García puts it, “based on the latest and most rocking web technologies.”

Cuende García talked with Knowledge@Wharton High School about the obstacles he has faced in a culture where adolescent entrepreneurs are rare, as well as his passions for innovation and software.

Knowledge@Wharton High School: How did you get involved in developing Asturix at such an early age?

Luis Iván Cuende García: When I was 12, I discovered free software. It was all very much by accident: A friend of my father gave him a CD of Linux, and I installed it on a computer. I had quite a hard time because it was the first time I was doing it, but then I saw that it was opening an awful lot of doors for me, and that I could do a lot of things with it.

I began to develop free software. Then, I created a distribution system, which I called Asturix (from Asturias) because at the beginning I thought that I could create an operating system for my community and that way, people could save themselves millions of euros, the way they did in other communities in Spain. The reality would be something else, because they [now] use it more outside of Spain (it has been downloaded in 20 countries) than they do in Asturias.

I worked for one year and then began to bring in more people. My philosophy from the very first moment was that this would be an open project that anyone could enter. Now there are some 20 developers.

KWHS: How is Asturix structured?

Cuende García: It is a non-profit organization. It is like any other association, but focused on the Internet. There are eight founding members, and we created the association only three months ago to give it legal status and to solve the problem that I have [due to my age]. For example, in the Campus Party of Valencia (the biggest event for digital technology, creativity and entertainment in the global network), [Asturix] managed to sign a collaboration agreement with the company that is behind this event. This was because we had the association behind us. I could not have done it [on my own].

I find myself facing all sorts of challenges [because of my age]. Now I am trying to create my own company along with a partner my age who lives in Murcia, and there are problems of all sorts. For example, to register my business brand on the Internet, we have had to resort to some tricks because they [wouldn’t] give us an electronic ID. In addition, one of our parents has to be administrator of the company, and [he is the one] who has the last word, when all is said and done.

KWHS: What does this new company consist of?

Cuende García: It is based on the project I created when I won at HackNow. That led me to give a talk in Berlin on September 17. It was an incredible experience.

It is a start-up company whose main product is called Asturix On, the world’s first distributed desktop. [It is portable, developed with web technologies; without any need for an Internet connection; and it can run on PCs, tablets, notebooks, etc.] We are going to try to promote the product, and to have a good base of users so that it can be profitable. We will launch it by December.

Cuende Garcia: Since it is a [non-government organization], we are never going to make any profits as a company, but obviously we should not lose money. Using donations and sponsorships, we have managed to keep ourselves going, but we are still not 100% self-sufficient. The goal is to be [self-sufficient] because we are commissioning projects. Whenever you have such varied and famous products, you derive prestige, and so people call you to commission other jobs: applications, web sites, [and the like]. We are hoping to fund ourselves on a foundation of those projects.

KWHS: What are your functions within Asturix these days? Are people surprised by your age?

Cuende García: In Asturix, I carry a heavy workload because I am the creator. I also continue to program part of the distribution and part of the products, and I do administrative tasks. I am busy making sure that everything goes well and keeps moving forward, as well as acting as the glue among the different developers. I take care of [keeping them in contact with each other] and assigning tasks to them.

The hardest thing for me to explain to people is why you have to donate to a free software project. One of the first questions people ask me is whether Asturix is patented, which upsets me. I have to explain to them that it is free. They are not aware that if [Asturix] is to continue moving forward, [it needs] donations. It is very hard to explain that it is an ecosystem that you need to maintain.

As for my age, [people’s] first reaction is disbelief. I get asked a lot of times if I am 16 years old. Now that I am that age, I am bit more imposing, but when I was 12 or 13, just imagine! Most people who get into the free software business are usually very open-minded and unprejudiced; the atmosphere is incredible. They are people who like free software and who live for free culture (free software applied to life in general, which they export to free music, etc.). I have also encountered disdain by some people in my country who make comments such as, ‘What does this brat think he is doing?!’

KWHS: Where will you be in five years?

Cuende García: Everything is moving along very fast, but I hope that the company goes well, and that within five years I will be in Silicon Valley (a region of California in the U.S. known for its high-tech innovation) with the company established and innovating. I also want to study software engineering focused on the world of business.

KWHS: Do you find it hard to balance your current responsibilities at Asturix with your high school workload, which has incidentally just begun?

Cuende García: Well, yes. Apart from that, I also play on a basketball team. My grades have suffered; earlier, I was getting nines, and now I am getting fives (on a scale of 1 to 10, where 5 is passing.)

KWHS: What would you recommend to young people who, like you, want to devote themselves to the world of technology and business?

Cuende García: The world of software can be marvelous. [Starting] a company or something similar gives you enormous freedom to create, and the opportunity to change the world.