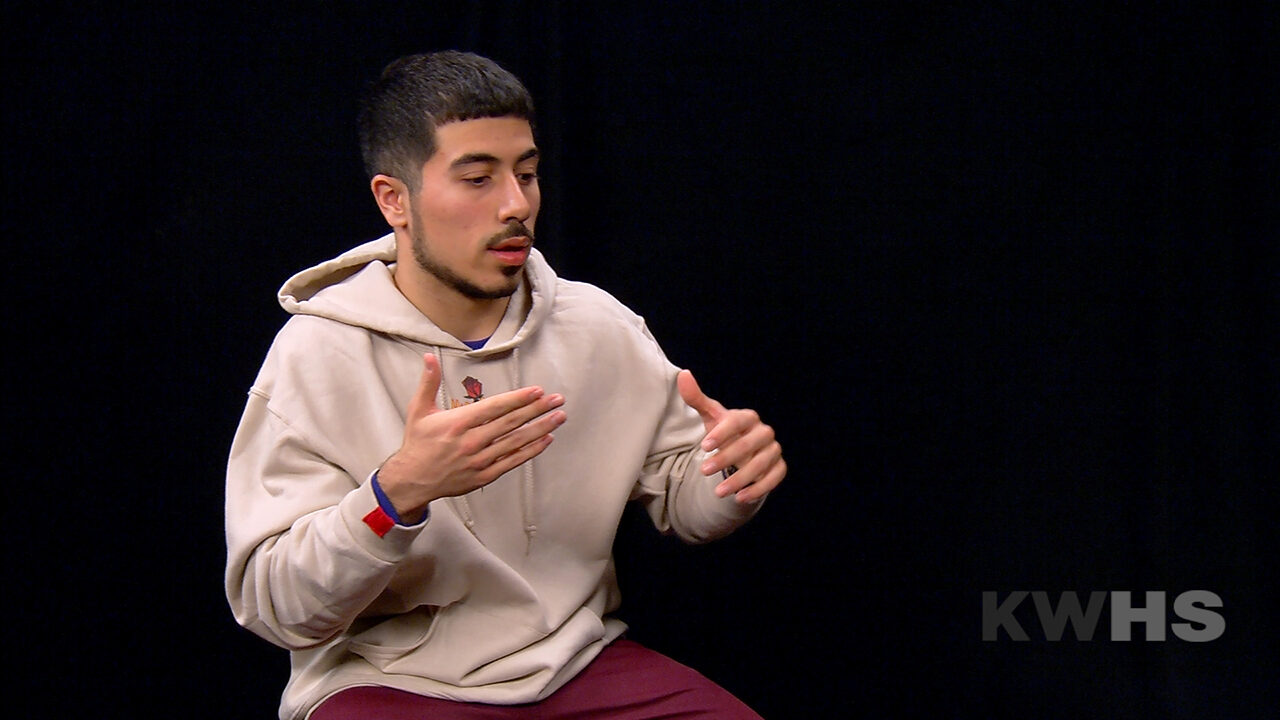 Kayvon Asemani, a native of Baltimore and a 2014 graduate of the Milton Hershey School for at-risk youth in Hershey, Pa., has a fascinating story to tell. While his young life has been marred by tragedy, he has long been guided by his passion and creativity. Today, Asemani, a Wharton junior studying economics, is a rising hip-hop star and founder of Asemani Enterprises, which includes a clothing brand. In part I of a two-part podcast and video, he sat down with KWHS interviewer Anthony David Williams to discuss his life, music, and mission to motivate other young people to follow their dreams, despite the challenges they face.

An edited transcript of their conversation appears below.

Knowledge@Wharton High School: Kayvon Asemani is a hip-hop artist and young entrepreneur from Baltimore. He began making music as early as elementary school and continued to develop his craft throughout his high school career. Presently, as a junior at the University of Pennsylvania’s Wharton School of Business, Kayvon continues to develop his brand after having performed for the United Nations [last summer] by furthering his clothing brand and releasing his music video for his latest track, “Rayz,” which garnered more than 100,000 views on YouTube. Kayvon is talking with us today to share this journey into music entrepreneurship and what it has meant for him.

Kayvon Asemani: How are you doing, Anthony?

KWHS: I’m good. How about you?

Asemani: I’m good. Thanks for having me. I’m honored.

KWHS: Having started your music career so early on in life, how did you know you wanted to pursue music? What was the process like at such a young age?

Asemani: That’s a good question. I think about it a lot, believe it or not. When I was in elementary school, the first rap song I ever heard was “Hot in Here” by Nelly. It was on the Music Choice channel. I was outside on the playground and my brother told me to come inside. I was five. He was eight. And he was like, “Listen to this.” And I loved it for the same reasons he loved it — all the energy, the music, the lyrics. I didn’t really know anything about the message — I was five years old — but I loved the way it sounded.

So, I went to my room and I tried to pen some things. And you’ve got to remember, this is elementary [school]. This is like when you get the paper in school and it’s got the big lines on it and you’re trying to learn how to write your letters. Over time, when everybody else is reading Dr. Seuss and starting to read bigger books, I’m listening to 50 Cent and G Unit Is Back.

KWHS: The other rhymes.

Asemani: Yeah, exactly. And I’m writing rhymes instead of reading. That was the way I developed as a person, not only as a poet or an artist. I was just thinking of it as learning something as you would learn science in school or math in school. It wasn’t necessarily a conscious decision like, oh, I want to be a rapper and I want to be an artist. Over time, I was writing it down and getting a lot better. And eventually, I was putting it on beats in middle school. And then when I got to high school, I was putting it out on the Internet. And then by the time college hit, I turned it into a business. That’s basically the story from the way it started and what it is now.

KWHS: It’s actually interesting that you would leave it there, because my next question is going to be how would you say that your sound, image or brand has evolved from that time to now at Penn?

Asemani: Absolutely. That’s important. I think as an elementary school student, as a five, six, seven year old, I was basically writing about what I knew from my experience, what I saw when I lived on the day to day. I was raised by a single mother [and have] two siblings. Again, it was not a conscious decision of writing about the things I’m writing about. It was just what I saw every day. So, my message wasn’t foreign. I didn’t really have an image; I was in elementary. But what I was writing about was around [those experiences].

Then when I was 9 years old, I lost my mom to a domestic violence issue. My dad was in and out. And one of the times he came, he basically took my mom with him. And so, [my siblings and I] were left orphaned. That threw a wrench in the whole thing. Life was hard before, but my mom was taking care of us the best she could, so we were fine. But when that happened, it was like we were done for. We were on our own until my uncle and cousin stepped in and helped, and they didn’t really have to. They looked out for us. Eventually, we got enrolled into a private boarding school for kids in need. I was in fifth grade, my older brother was in eighth grade and my sister was in third grade. We went there and grew up with a lot more resources, but around other kids who went through tough circumstances growing up.

As I grew through middle school, through high school, that’s what I talked about. I talked about not only what I had experienced before I turned nine, but then everything after that and what I was experiencing as a result of it. As you get older, you start looking around at the world a lot more. You start becoming a lot more aware of what’s going on — the greater landscape that you’re just a little piece of. And that’s what I started to see [in high school]. I was like, wow, inequality is pervasive. And I experienced it early. But there were a lot of people who experienced a similar thing that I did, but they didn’t get to go to a private boarding school like I did. They were still in under-funded school systems and wherever else in the country or the inner city or even the rural areas. They weren’t getting the privilege that I was getting from my private boarding school.

While I got to get ahead through this environment and really be in control of my own destiny with my own ambitions because of the resources I had behind me, I saw that there was a lot of untapped potential in other places, and it was outside of these kids’ control. That’s what I wanted to bring awareness to. That’s what I wanted to talk about. I wanted to talk about how my story, my narrative, can speak to a lot of those issues and hopefully relate to somebody, hopefully inspire somebody to try to make it out of their situation. But also motivate somebody who is well off and more well endowed to help these kids who have so much high potential. Look what it did for me.

That’s my whole image with anything that I might have been doing, whether it’s music or something else. With my music, I really try to hit that mark. Penn and Wharton in specific, [were] my dream since the eighth grade. Nobody from a background like mine — where I grew up in Baltimore [and with] the situations of the kids around me — nobody there was going to Wharton. Nobody there was going to Penn. Period. It was a dream I had. And then once I got to this boarding school, obviously college became a lot more real — the idea that I could get to college. Nobody had been to Wharton from my school since 1977. So it’s not like people are going, they’re not.

I was the guy who was the top of my class. I was the star academically. But people even thought that I wasn’t going to get to a place like Penn. It was really unlikely. And the fact that it happened was huge for my community, not only the school, but also where I grew up originally. Then when I got to college it’s like, dude, Penn was a culture shock. Most of the kids who go to Penn, at least Wharton, [are] expected to come to a place like this. If it wasn’t Penn or Wharton, it was a school that would try to be this caliber. That’s everybody’s reality. Whereas my reality [is that] I’m lucky to even be here. So, I wasn’t taking this opportunity for granted. But at the same time, because I was able to see opportunity even when there wasn’t any in Baltimore, and then when there was a little bit more at my boarding school, when I get to Penn it was like they’re just throwing this opportunity at you. So, it wasn’t hard for somebody who came from where I came from to see that and try to take advantage of that.

You talk about how it’s evolved since I got to Penn. Before [I got to Penn], the people around me were going through what I was going through. So it was like: “we’re in this together.” At Penn, it’s not necessarily the same situation because there aren’t as many people from a background like mine as there were where I grew up. Penn has a lot more privilege. There’s a lot more money. There’s a lot more history of success in people’s families. So, it was more about trying to find a way to bring awareness to these issues that I grew up with and that so many people are growing up with, without at the same time alienating the people who are here and come from a place of a little bit more privilege. That’s a delicate balance. You can’t be out here just pointing fingers, right, because then people aren’t going to listen to you. [I had to figure out how to] make a message that addresses these things that I’m trying to talk about, but also relates to these kids who are at Penn or another college or wherever else they might be? How do I bring them all together?

Be sure to check back with KWHS in a few days for Part II of Kayvon and Anthony’s interview, where he talks about his recent gig at the United Nations and his growth as an entrepreneur.

Update: Part II of our interview with Kayvon has been published on Knowledge@Wharton High School! Check out the Related KWHS Stories tab to the side of this article to watch the video, listen to the podcast or read the transcript.

Kayvon says that he recognized “a lot of untapped potential in other places.” How and why did this become a focus for him?

Kayvon’s talent evolved from a very organic place within himself — in other words, he was doing what he loved, not what he had to do. What qualities did he need to drive that forward?

6 comments on “Part I: Hip Hop Artist Kayvon Asemani on Building His Brand and Controlling His Destiny”