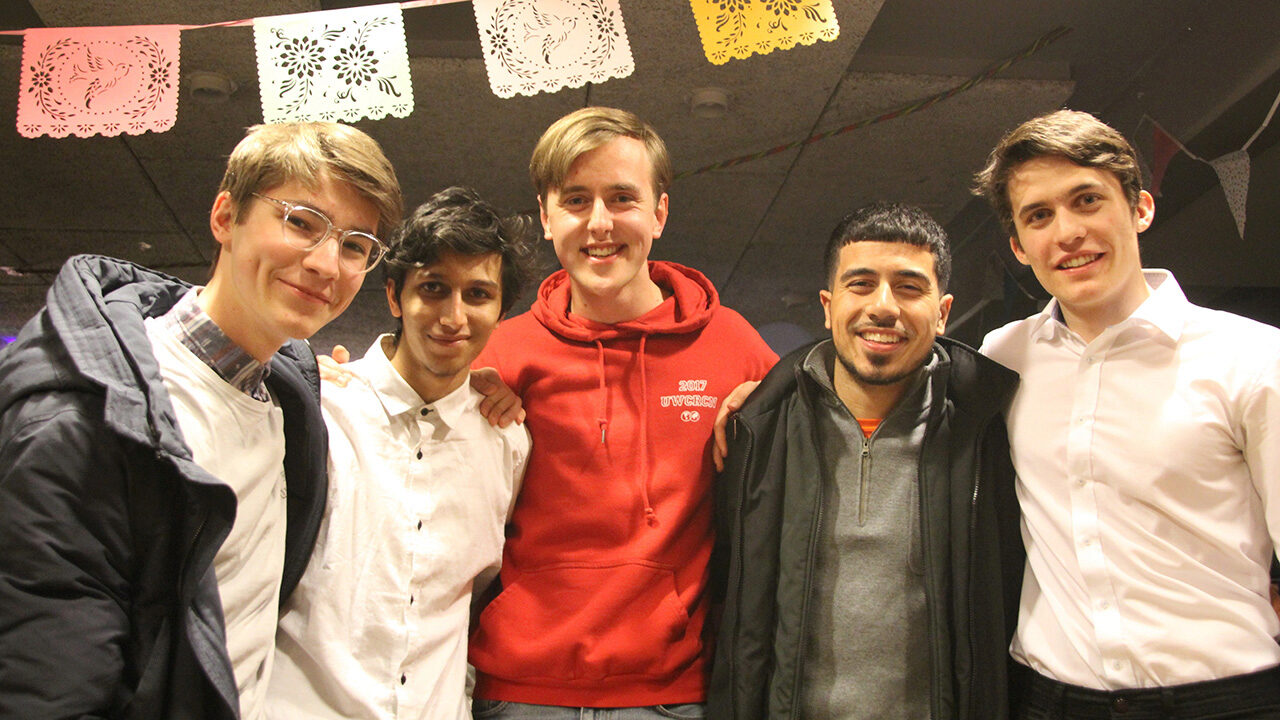 We talk a lot about the different ways that the KWHS Investment Competition impacts students’ lives – building their financial and communication skills and promoting teamwork and entrepreneurial thinking.

Add to that list meaningful connections that lead to inspiring outcomes.

Last year, during our first KWHS Investment Competition Learning Day on May 5, 2017, Wharton undergrad and hip-hop artist Kayvon Asemani spoke to a group of high school students from around the world who were visiting Wharton in Philadelphia and who would be competing in our annual investment challenge the following day. Asemani shared his own personal message of loss, hope and perseverance, which he had communicated a few weeks earlier in two videos that were published in the Knowledge@Wharton High School online business journal.

While many students were moved by Asemani’s talk, one group in particular – comprised of four high school juniors from United World College, RCN in Norway – were quite literally moved to action. “Our team was amazed by Kayvon’s experiences, reflections, and his attitude,” recalls Herman L., one of the members of Norway’s United World Capital investment competition team. “We were all inspired and realized that other students in Norway could be too.”

That very day, Herman and his teammates Jesper D., Leon M. and Yash R. approached Asemani and asked if he might be interested in giving a similar talk at their high school – located in the “remote wilderness” of Bergen, Norway.

Fast forward nearly a year to March 2018, and Asemani took a plane to a train to a boat to make his way to Norway’s coastline and United World College, RCN. Once there, he delivered a TEDx talk to Herman, Jesper, Leon, Yash and all their classmates. TEDx published Asemani’s talk, “Why We Should Invest in Each Other” this month on YouTube.

“When I met Herman and the rest of his team last year at the event at Penn, I was immediately impressed with them,” notes Asemani, who is graduating from Wharton this May and heading to a job at Facebook. “I hoped my words would be helpful to all the students in attendance in one way or another, but Herman and the other guys saw a message that they thought could be spread far and wide to more students at their school, and they took the initiative to get me out there. I was honored that they valued my words enough to do that, and I was impressed by their professionalism and drive. When I got to the school, I fell in love with what they were doing. There were over 200 students representing 100 different countries, and they all lived together at this international boarding school in Norway. I saw so much perspective, culture, and community in one place.”

The United World College, RCN students were equally taken with Asemani’s visit, says Herman, whose hometown away from boarding school is Sweden, while his investment competition teammates hail from Denmark, the United Arab Emirates and England. “Traveling to Wharton for the competition, our team had realized that at our school, people are sometimes afraid of dreaming of what’s beyond current reach, beyond the horizon,” says Herman. “Perhaps it’s a consequence of the culture clashes, living away from home and adapting to English, but the fact is that some of us lose track of our dreams in the midst of everything else. We hoped and believed that Kayvon’s story would elicit the courage and drive necessary to strive toward our dreams. I feel that this is what we accomplished. One of my friends who wanted to pursue a career in music is now considering studying economics. In my geography class, the teacher mentioned Kayvon’s story to encourage us, and as recently as today, part of Kayvon’s talk was quoted in a dinner conversation on integrity. This whole thing has been an incredible experience.”

And just as Asemani’s Learning Day message crossed oceans, it seems that “Why We Should Invest in Each Other” will pay dividends. “I got a chance to meet a bunch of the kids the day before I gave the talk and I felt immediately connected to them,” recalls Asemani of his recent trip to Norway. “Giving the talk was easy, because I felt like we had become some sort of family by that point. The talk was great, but connecting with the kids on a more individual level was also powerful. I still keep up with a lot of them and am following their journeys to see the amazing things they will accomplish in the future.”