The Market for NFT Digital Collectibles: Hype or Blockchain Bonanza? 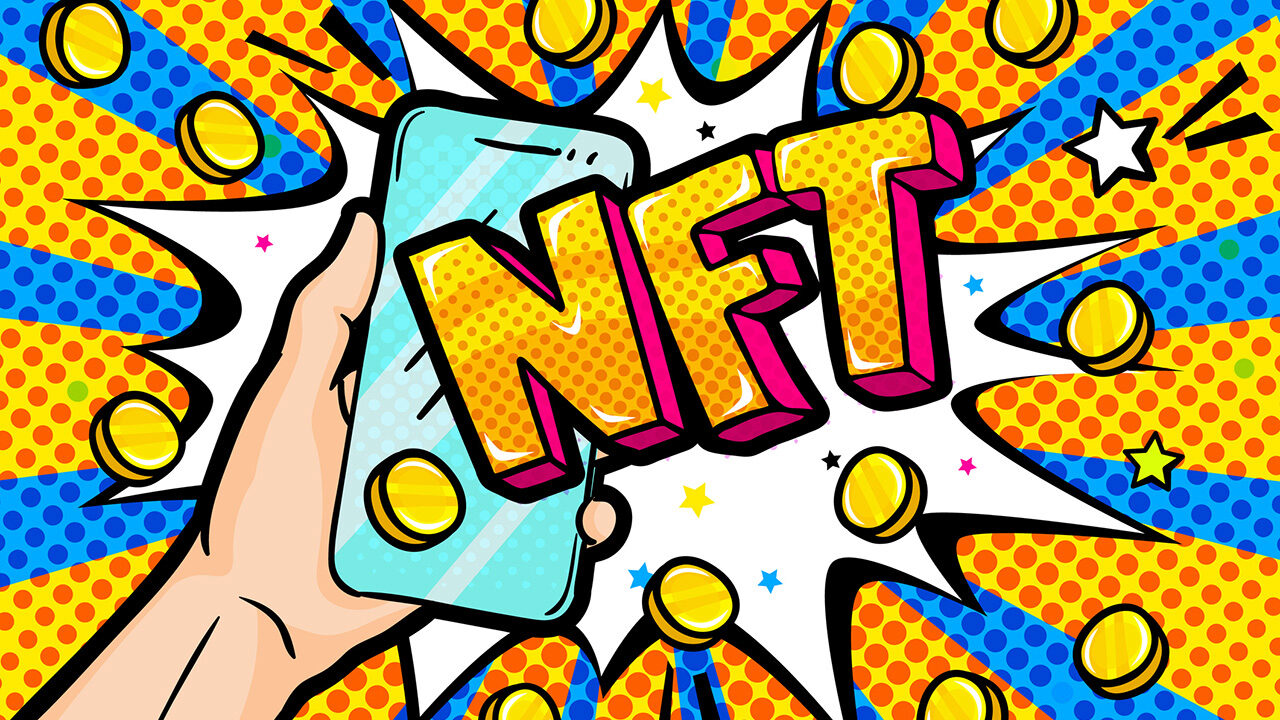 From June 23 to June 30, 2021, Christie’s auction house will be auctioning artwork from 18-year-old trans artist FEWOCiOUS, real name Victor Langlois. He has five lots going on sale, each representing a year of his life as he discovered his gender identity between ages 14 and 18.  His digital artwork is considered groundbreaking, and so too is the form in which it is being auctioned – as non-fungible tokens or NFTs.

Much like FEWOCiOUS, NFTs have burst on the scene in the past year, making it possible for people to own and collect digital goods. And it’s so much more than artwork; NFTs allow people to buy digital moments, including the original video footage of blocked shots in basketball games, and even social media memes. In May, for example, 21-year-old Zoe Roth sold the popular “Disaster Girl” meme in which she was featured as a child for nearly $500,000. The meme was stamped with digital code that marked its authenticity, thus rendering it a unique NFT.

Simon Taylor, co-founder of 11:FS, a company at the forefront of digital financial services, recently joined the popular Wharton Fintech podcast to help demystify non-fungible tokens and explain the energy that is driving this passion economy for people who are into everything from digital art to cryptokitties. Taylor described the NFT craze through the example of NBA Top Shot, a platform that allows sports fans to buy, sell and trade numbered versions of specific, officially licensed video highlights, fueling the NFT “moment marketplace.”

“A fungible token is where if I give you a dollar and you give me a dollar back, nothing has changed,” Taylor explained to Wharton Fintech host Ryan Zauk, an MBA candidate at the Wharton School. “But if I give you the original Mona Lisa and you give me a copy of the Mona Lisa…you win in that deal. So, the Mona Lisa is non-fungible and the dollar is fungible, because it has an equivalence of value…What’s the digital equivalent of the [Mona Lisa example] that’s really hot right now? Baseball cards. The whole sports memorabilia space is just absolutely on fire. NBA Top Shot comes along and says, ‘You know what’s better than a baseball card? 10 seconds of NBA history.’ You can own the original 10 seconds time stamped by the NBA…just a little bit special…Humans understand scarcity and will pay more for one of the original 10. Somebody may leak that and copy it, but it doesn’t mean those original 10 don’t have value. That’s exactly what is happening in non-fungible tokens. People are getting really excited by buying these original scarce things…The people who are buying that stuff are not buying it to be part of the crypto economy. They’re buying it to be one of the only people who owns that rare, unique moment.”

As Taylor suggested, NFTs are digital assets in the so-called crypto economy, which includes cryptocurrency like Bitcoin, tokens and, most importantly, blockchain. Blockchain technology, a digital ledger that records who owns what in the virtual world, makes the market for NFTs possible. Kevin Werbach, a Wharton professor of legal studies and business ethics and an expert in blockchain, has said, “Blockchain is a new structure of trust…a decentralized kind of database where there’s not one actor that controls it.” Each unique, digitally-coded NFT (and the ultimate name of its owner) is stored on the blockchain. And an NFT’s value can fluctuate, just like stocks. Often, it depends on how much someone is willing to pay for it.

“NFTs are a unit of data stored on a blockchain, used to commodify digital assets such as art,” notes Sarah Hammer, managing director of Wharton’s Stevens Center for Innovation in Finance, which launched The Blockchain Laboratory to research blockchain and cryptocurrency. The Stevens Center, says Hammer, recently awarded funds to a professor to do research on the NFT marketplace. “I expect there will be a lot of evolution in the NFT marketplace as the legal rights and capabilities around the technology continue to evolve,” she adds.

“Will speculative investors push the prices of NFTs to unfathomable heights or will it serve its original purpose of helping artists to sell their pieces of art and make ends meet?” — Laksana L.R., NFT Market Watcher

The music industry is especially watching that evolution because NFTs’ money-making potential could signal big bucks for musicians who have seen their profits erode with the demise of the CD and digital downloads.

In March, Kings of Leon was the first band to release an album as an NFT. When You See Yourself had three available digital tokens for NFT collectors, including a special album package, live show perks like front-row seats for life, and exclusive audiovisual art. The band reportedly generated more than $2 million from the sales.

During a recent visit to Wharton Business Daily radio show on SiriusXM Ch. 132, John Fleckenstein, COO for RCA Records, spoke to host Dan Loney about the potential of NFTs for the music industry.

“Anything that is a business reliant on intellectual property rights, in particular in the digital space, this is a potential game changer,” noted Fleckenstein. “Everybody’s question right now is are we in the 1990s-era dot-com [bubble] version of NFT and it’s going to be years before it settles into a robust business model, or is it going to happen overnight? The noise of what we did with Kings of Leon was clearly very loud given it was the first time anybody’s put an album with an NFT, but the kernel of what an NFT means for us is exciting. Our industry has gone from a place of where you physically had to buy a piece of music to consume it, to a world where you could get music anywhere you are, anytime of the day, whenever you want with zero barriers to entry through streaming. This all of a sudden offers up the idea of bringing scarcity to the digital space, which is exciting for us.”

NFTs have captivated the world’s youth, who are into the emerging crypto economy (people use bitcoin and other cryptocurrency to purchase NFTs) and the latest digital, finance-related trends.

“I am interested in NFTs because they have many different applications and potential in this digital world we are living in and growing in. It’s the cool factor of saying, ‘Look what I got! This is the only one like this in the world,’” says Cohen K., a high school student from Washington state who is participating this summer in the Wharton Global Youth Program Future of the Business World online course. Cohen is launching a business around NFTs, though he is reluctant just yet to share details.

“I would invest in an NFT because these first NFTs are pieces of history,” adds Cohen, whose father purchased an NFT of the VeVe app in the form of a yeti toy that uses augmented reality. “NFTs are written history, but instead of handwritten they are written through code.” One of Cohen’s favorite NFT moments in recent months? Twitter CEO Jack Dorsey selling his first tweet as an NFT for more than $2.9 million.

The NFT hype has already cooled somewhat in a matter of months, though many people are still following the moment marketplace and figuring out how they can profit from it. Inspired by Cohen’s NFT fascination, we decided to check in with some of the students who participated in our 2020-2021 Wharton Global High School Investment Competition to learn about their interest in NFTs and where they think this market is headed. Here’s what a few of these aspiring investors (all of whom made it to this year’s Top 50 semifinal round) had to say:

“I am interested in NFTs because I am keen on observing how society will treat this new asset class. Will speculative investors push the prices of NFTs to unfathomable heights or will it serve its original purpose of helping artists to sell their pieces of art and make ends meet? I guess I’m drawn to the uncertainties behind NFTs.” – Laksana L.R., 16, Indonesia

“NFTs are interesting because the creation of a market for digital collectibles that give buyers true legal ownership of a video, piece of artwork, etc. is simply unprecedented…The only concern with NFTs is whether or not investor confidence will continue to stay at current levels. NFTs are similar to cryptocurrencies in that they are much less accepted than the dollar. Even if confidence wanes in the dollar, it won’t lead to a crash simply because of how many users there are but, as evidenced by Bitcoin’s latest drop from 56k to 34k, cryptocurrencies, and potentially NFTs, have more volatile price changes. Nevertheless, I would invest in NFTs because the market is clearly there, and if I can purchase a few assets that have potential to grow in value, I wouldn’t pass it up.” – Vedant K., 17, U.S.

“One has to understand that the sole reason there is any demand in the NFT market is because it’s an NFT; similar to why people went bonkers subscribing to IPOs [Initial Public Offering] of any dot-com company – because it was a dot-com. People are willing to buy any NFT, made by a celebrity or the like by shelling out thousands, if not millions of dollars. But, as the craze over NFTs fizzles out, the value attached to a lot of them will also erode. We do believe the NFT market will still be present 20-30 years from now, but will be much more sober. History shows that whenever something new is introduced, especially in the financial context, investors or rather speculators overestimate its value because of the trend associated with it, only to realize that the value is no more, as trends are finite.” –Team Bullseye, 17, India

“I was first introduced to NFTs when my favorite artist Jacob Collier put a poll on Instagram asking if his fans wanted him to create and sell NFTs. As a die-hard fan, I wanted to get hold of whatever it was, but I went in and did some research about what an NFT was in the first place, so that I could convince my parents to buy it for me. NFTs really piqued my interest because it helped artists sell one-of-a-kind artworks, whose value can never be matched… One downside of NFTs is that Ethereum [the most actively used blockchain] is extremely energy hungry, leading to climate change — the exact thing we are working to solve. One story I read on the news gave shocking numbers: one NFT took up electricity that could power up a family home for two months. If a solution to sustainable energy can be found for computers to do large computations, I think more people will become open to the idea of trading NFTs, and the market can grow. I think NFTs are a great idea of investing while promoting creative work, so I would definitely invest in a couple NFTs supporting my favorite artists!” –Amita S., 17, U.S.

“In March 2021, the news about Christie’s auction for virtual art by the artist Beeple drew me toward researching NFTs. Given that the artwork sold for nearly $70 million, I was curious to know why NFTs held such significant value and how they worked… NFTs are exchanging at overinflated values; however, that doesn’t mean they’re a bubble going to explode. NFTs are here to stay.” –Gaurav S., 16, Nigeria

Are you following the market for NFTs? Do you think the interest and investment in them will grow? Share your thoughts in the comment section of this article.

Amita S. says, “One downside of NFTs is that Ethereum [the most actively used blockchain] is extremely energy hungry, leading to climate change.” What are your thoughts about this? Would it prevent you from actively engaging in the NFT marketplace?

Like NFTs, what new technology has captivated your attention and why?

19 comments on “The Market for NFT Digital Collectibles: Hype or Blockchain Bonanza?”

Educator Toolkit: Is College Worth the Investment?