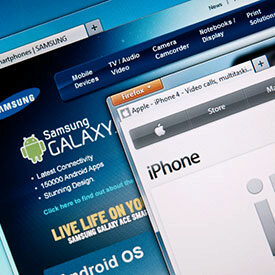 This month in San Jose, Calif., the two biggest smartphone companies in the world, Apple and Samsung Electronics, entered into a head-to-head intellectual property rights lawsuit. According to a recent article by Steve Lohr of The New York Times, “Apple asserts that Samsung made ‘a deliberate decision to copy’ the iPhone and iPad.” On the other side of the legal battle, Samsung contends that Apple has infringed on Samsung’s own cell phone technology patents.

Apple argues that Samsung has plagiarized Apple’s designs for the iPhone and iPad – i.e., copied them without permission and sold them as original Samsung work. You may be familiar with the term plagiarism from your own schoolwork. For example, when you write a paper for American History, you do not have to footnote the date of the Revolutionary War because that is a known fact. However, if you read that American military tactics were why the U.S. defeated Britain and if you include this argument in your paper, you need to properly cite your source because it is someone else’s idea – his or her intellectual property — and not your own. If you fail to give credit to others when you use their ideas, you are plagiarizing and will most likely fail your assignment (or worse) if caught.

Intellectual property refers to an original idea that is owned by its creator. Just like with physical property (a car or computer), theft of intellectual property is illegal. Outside of the classroom, ideas (like touch-screen technology) can be protected by patents, which are issued by the United States Patent and Trademark Office. A patent forbids anyone but the inventor from making, using, selling or importing an invention for a limited time, usually 20 years. There are three types of patents: utility patents for machines and useful processes, plant patents for the discovery and reproduction of new plant species, and design patents that protect original designs. Apple argues that Samsung has infringed on – plagiarized — many of its design patents by using elements of the iPhone and iPad in the Samsung Galaxy smartphone.

Apple is asking for $2.525 billion from Samsung for damages, while Samsung wants 2.4% of each Apple sale where its own patents have been breached by Apple. Apple’s patent war has been going on for the last two years, mainly against Google’s Android products, including the Samsung Galaxy. The Wall Street Journal suggests that this legal war is actually a proxy war for Apple vs. Google, a long-brewing tension expressed by Steve Jobs himself. Before his passing, the Apple godfather claimed he would “go thermonuclear war” over Google’s supposed iPhone “theft.”

Much of this debate stems around smartphone design. Apple claims that Samsung copied the iPhone’s rounded edges, clear flat surface and touch-screen technology in the Samsung Galaxy. Samsung, however, asserts that Apple copied the original iPhone design from Sony. If Apple wins this lawsuit, Jobs’s already dominant company will have a monopoly on smartphone and tablet production.

Although patents were meant to protect designers and promote creativity — people could not simply copy others’ work but had to design new products themselves — today’s technology patents may actually hinder innovation, some experts say. According to Kevin Werbach, professor of legal studies and business ethics at Wharton, “For a long time, major technology companies saw patents as purely defensive assets, to prevent others from suing them. They generally didn’t use patents as an offensive weapon against competitors. In recent years, companies such as Apple, as well as a new generation of patent-holding companies, have taken a more aggressive stance with their patent portfolios. Companies are now willing to use patents not just to generate licensing revenues, but to [restrict] their competitors.”

Patrick Houston, in an opinion article for InformationWeek, predicts a lose-lose outcome for this Apple/Samsung showdown. Houston believes that patents are bad for the free market overall because they grant monopolies to big companies, and younger companies are unable to compete. He points out that the sheer number of software patents — since the 1990s, 200,000 software patents have been filed — makes it nearly impossible to develop new products. Investors are hesitant to back technology startups because they want full security that new products do not infringe on existing patents. At the same time, younger companies may not have the resources to test the originality of their products, and therefore cannot gain more capital to develop and grow — a Catch-22.

A Patent Bully or Innovator?

Also, patent litigation is an expensive endeavor. Senior lawyers for both Apple and Samsung earn upwards of $500 per hour, according to the Daily Mail. Yet both sides think this war is worth the financial cost. As Werbach notes, “Undertaking any litigation against competitors can be costly and risky. There can also be significant costs to a firm’s reputation if it’s seen as a patent bully rather than an innovator. Yahoo filed a major patent lawsuit against Facebook, for example, which provoked tremendous criticism. Yahoo settled the case when a new CEO took over and made the decision that the harm outweighed the potential benefits. Today’s patent system, however, creates very powerful opportunities to block competitors from the marketplace in certain industries. So it’s understandable why some firms decide to sue.”

This much-publicized trial will set precedent for all upcoming technology trials in the future, and if Apple wins, the company will control the smartphone and tablet market. The focus moving forward, however, will not be Samsung vs. Apple or even Google vs. Apple. Instead, such lawsuits will force us to re-examine our patent system. Werbach argues that we should not throw out patents altogether: “We need legal mechanisms to protect inventors. Unfortunately, the patent system has not kept up with the changes in the technology industry.” He stresses that technology will continue making great strides forward with or without patents. The goal will be to find a balance between protecting inventors without hindering innovation.

What is intellectual property and why is it important in the corporate world?

Why is the Apple-Samsung patent war so important to the future of the tech industry?

Can you think of other high-profile patent lawsuits?

3 comments on “Apple vs. Samsung: The Clash of the Smartphones”

A Trip to the Bank, Lollipops and World Savings Day