Mo Fall Dreams of Playing Basketball for an African League

Mouhammad “Mo” Fall, 16, is a rising senior at the African Leadership Academy in Johannesburg, South Africa. Fall and several of his classmates came up with the idea to create an African Sports Academy to help nurture and develop sports talent in South Africa. He talks with Knowledge@Wharton High School about his plans for improving the sports infrastructure in his country. …Read More 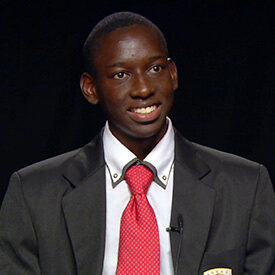 Mouhammad “Mo” Fall, 16, is a rising senior at the African Leadership Academy in Johannesburg, South Africa. Fall and several of his classmates came up with the idea to create an African Sports Academy to help nurture and develop sports talent in South Africa. Knowledge@Wharton High School spoke with Fall on the Wharton campus this summer — while he was attending the Wharton Sports Business Academy for high school students interested in sports-related careers — to talk about his passion for sports and his plans for improving the sports infrastructure in South Africa.

Knowledge@Wharton High School: Tell us about your high school and also about your sports experience there and growing up.

Mouhammad Fall: I go to school in South Africa at an institution called the African Leadership Academy. I was going to school in Senegal [a country in western Africa] before, and they asked me to apply to the African Leadership Academy. Basically, they are trying to [help] us to become future leaders of Africa. My sports career has been awesome. I play a lot of sports there. I play basketball and Frisbee, and I was on the volleyball team. I play soccer sometimes, and I learned ping-pong and tennis. I really enjoy my time there.

KWHS: Do you have a favorite sport?

KWHS: How do sports differ in your country from the U.S.?

Fall: We have our own [national] sport in Senegal called wrestling –and it’s really only in Senegal. They make a lot of money [from] it, but they don’t have a league; they’re not keeping track of scores. They’re basically just organizing random fights. People go to the stadiums, they sell tickets and they make money [from] it.

KWHS: Were you involved in that?

Fall: Not really, because there’s a commission in charge of taking care of that sport. It’s pretty formal, but there’s no league.

KWHS: It’s different than any wrestling you might see in the U.S.?

Fall: Yes, it is. It is traditional [and is a type of folk wrestling first performed by the Serer people, the oldest inhabitants of Senegal].

KWHS: What is the African Sports Academy?

Fall: At the ALA, they are teaching us the basics of leadership and entrepreneurship. We had to come up with a project last year at the end of our entrepreneurship class. Everybody had to [focus on] something they were passionate about. I was passionate about sports. I was trying to find a need in Africa related to sports. I found that many kids in Africa were really talented, but did not have the opportunities to attend a club or go to a sports academy because they didn’t have the money.

So, with a group of four other people — including a student from Cote d’Ivoire, another from Kenya, one from Nigeria and a girl from Madagascar – we are trying to build the African Sports Academy, which is hopefully going to be the next big academy in Africa.

We try to get kids who are really talented and who come from an impoverished background, and help them attend our school. We try to improve their performance in sports. And at the same time, we give them some other background. They have to go through a normal academy curriculum so they can have a back-up plan. We teach them a little bit of finance, so when they become professionals, they can take care of themselves and of their finances. And we try to turn them into professional athletes.

KWHS: How has it been going so far? Have you had success?

Fall: It is. We came up with the executive summary. We were supposed to run a pilot project this summer, but many of us are not available. I’m here doing a summer program. Some other people are [pursuing] other opportunities, so we didn’t really have time to run the pilot project. But we want to run a fundraising tournament next year so we can start raising [money]. We think it’s going to take us time to build an academy, because our [ALA] founders had the same dream and it took them a lot of time and work; they did it even after college. We are trying to focus on this right now and get [it started].

KWHS: It sounds like you want to continue to develop this academy after high school.

Fall: Yes, [we do]. Maybe it is possible, but it’s not realistic to say that we’re going to build this academy when we are in high school. We only have one more year at the African Leadership Academy, so we don’t think we’re going to be able to raise enough money to build this academy. But we can still stick to the project even at college, try to work on it, try to find sponsors, if possible. And yes, we can still think of building this academy. It’s basically for college and after college.

KWHS: I can see this as being a real learning experience. Have you taken any business lessons away from what you’ve done so far, lessons about entrepreneurship and leadership?

Fall: Here at the program?

KWHS: Actually, I’m talking about your academy, but we can talk about the program as well.

Fall: We learn a lot about leadership and entrepreneurship at school. We learn how to promote our ideas, how to pitch our ideas to people. We had an exercise called the elevator pitch. Basically, you have to talk about your idea, you have to present it to possible sponsors, and you have to do it in one minute. It was really hard. You have to know what you want and you have to sell your idea.

KWHS: Do you remember your elevator pitch?

Fall: I don’t really remember it. But I remember that I emphasized one thing: The fact that the [National Basketball Association] makes a billion dollars per year. The African continent is huge compared to the United States, and we still don’t have a basketball league that can make thousands of dollars, [much less a billion dollars]. And we have so many good players. I’m a basketball player, and I want to turn pro. But what’s my dream? To play in the NBA. Why can’t my dream be to play in Africa for an African league? Because [no such league exists]. Even in Senegal, we don’t have a league. We don’t have championships. They just wake up all of the sudden and decide that there will be a final. You don’t even know where those finals come from. We want to have leagues in Africa.

And if we look at the EPL [English Premier League for soccer], fans are so engaged and they basically give their money to get jerseys and scarves. They’re passionate about what they’re doing. We can have that in Africa, but we don’t. Not much attention has been given to sports so far. We want to do it, instead of trying to rely on the governments to do it for us.

KWHS: Does any particular sports star, past or present, inspire you?

Fall: There are many of them. I would say Michael Jordan is inspiring because he started from nothing, and he was not a really good basketball player. His brother was much better than him. But he had that determination, and he knew he was going to be better; he was going to beat his brother one day. And even when he did, he just kept going on. He wanted to be the best. He achieved it. I think that’s what we have to do. We have to be passionate about what we’re doing. We have to have the determination. [Michael Jordan] still owns the Charlotte Bobcats. That’s basically the same concept with our [sports] academy. Why would we decide not to do it? There’s really no reason for us not to do it. It’s going to be profitable in many ways. We’re not losing anything in doing this, and we’re helping other people as well.