On February 1, 2012, Facebook filed for an initial public offering that could value the company at $75 billion to $100 billion. Teen FB users and fans, as well as stock market experts, weigh in on the world’s favorite social network becoming a public company. …Read More 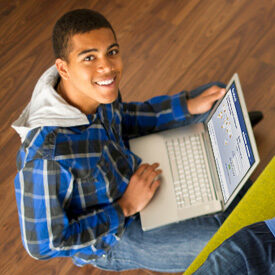 It doesn’t get much more connected than this. Morgan Thompson, a senior at Fargo North High School in Fargo, N.D., saw several of her interests come together in one of this week’s biggest news stories: Facebook’s plans to go public.

Thompson, 17, has been using Facebook for social networking since she was a freshman in high school when her tennis teammates helped her create a profile; she has been watching and discussing founder Mark Zuckerberg’s business moves in anticipation of the company someday going public (Thompson’s dad is a stock broker); and – with definite plans to pursue marketing as a career — she is fascinated by the marketing potential of social media sites like Facebook for businesses, the topic of a school paper she recently completed.

“I am interested in all the hype that’s come up around [the Initial Public Offering,]” says Thompson, who is president of the student marketing organization DECA for her state. “It’s well-deserved hype because it’s a big deal. I think it’s going to have a lot of people buying into it early and [the stock price] is going to be expensive at first. But I do think [the stock price] is going to go down some after everyone starts buying into it. Facebook is trying to generate $5 billion to put back into the company, and I think they’re going to raise a lot more than that.”

‘Millions and Millions of Users’

CEO Zuckerberg would no doubt ‘like’ Thompson’s financial predictions. When a company first issues shares to the public on the stock market, it begins with an initial public offering (IPO) – an opening price for the stock. An IPO helps a company determine how much the stock is worth at that particular moment, and it allows the company to raise needed capital for expansion or other projects. It is also an opportunity for people in the company who own private shares to finally cash in and make some money. This week, Facebook announced that it plans to do an IPO, filing all the necessary paperwork to move from private to public status and begin trading shares on the stock market. Facebook’s actual IPO won’t happen until late April or May.

Still, as Thompson points out, the buzz around this news is big, in large part because Facebook is expected to be valued at $75 billion to $100 billion for its initial public offering, which would make this the most valuable Internet IPO ever. “I think the hype [alone] could help raise $5 billion,” adds Shruti Thundiyil, 17, and a senior at Foothill High School in Pleasanton, Calif., where she has studied Facebook’s business model in her AP macroeconomics class. “One of the greatest strengths FB has in terms of business is its market; it has millions and millions of users.” Thundiyil studies Facebook and other tech companies closely as she prepares to launch her own Internet business, theLearningOwl.com, an online service that connects teachers and students to share and learn.

Retail investors looking to buy the newly traded Facebook stock (ticker symbol “FB”) are expected to gobble up shares, but experts told the Knowledge@Wharton Today blog this week that there is no guarantee the social network giant will be a long-term winner on the stock market.

First of all, it’s unclear whether Facebook can grow into its high estimated valuation, says Luke Taylor, a Wharton finance professor. On the surface, Facebook looks hard to beat. Through the company’s filings, the world can now see some of Facebook’s financial and other personal data. For the year ended December 31, Facebook reported net income [what is left after subtracting expenses and losses from total revenues] of $1 billion on revenues of $3.71 billion. In 2010, the firm saw net income of $606 million on revenues of $1.97 billion. The company has 845 million monthly active users who contribute 250 million photo uploads and 2.7 billion comments a day.

Taylor notes that Facebook’s stock market debut prospects will largely depend on how the Nasdaq trades and other market conditions. (The Nasdaq index is often viewed as a proxy for the tech industry.) How will the company’s shares trade ultimately? Facebook is likely to capture the imagination of retail investors, but so-called “smart investors” may pare back demand. “It’s not automatically true that Facebook will soar,” Taylor points out.

The company may also feel the effects of management turnover, as some managers cash out and the leadership team looks to hire seasoned executives to help steer the company while it matures. “Facebook’s IPO will be a massive liquidity event for thousands of employees,” Wharton legal studies and business ethics professor Kevin Werbach said in an earlier Knowledge@Wharton article. “Many of them have already monetized at least some of their stock options [a form of non-cash compensation that a company pays its employees], but the IPO will still be a massive wealth transfer. It’s difficult to retain employees who have already made millions of dollars on their stock options.”

Many people are speculating about what Facebook will look like after it goes public. In order to grow and to generate revenue, the company will most likely have to sell more advertising to bigger-name companies, and possibly even branch into e-commerce, selling products online. “After the IPO, I can see FB increasing the number of advertisements on the site. Facebook already has been increasing ads, and I personally am not looking forward to seeing even more,” notes Thundiyil.

Thompson adds that it will be “extremely interesting” to see how Zuckerberg and company tackle e-commerce. “Whenever Facebook does something, it goes all out,” she notes. “Then a lot of people usually retaliate and say they don’t like it. Facebook takes a little step back instead of going completely back, so [the company] is always moving forward.”

Progress – more than profits – is what Facebook is all about, suggests Zuckerberg in a letter he wrote to potential shareholders, saying “We’ve always cared primarily about our social mission, the services we’re building and the people who use them.” Can Facebook stay true to its task of connecting the world once it becomes a public company that is subject to much more scrutiny and government regulation? It is clear, says Thompson, that Zuckerberg hasn’t been in it for the money. “He’s been getting offers to sell Facebook for years for as much as $1 billion from [companies like] Yahoo and MTV. The fact he didn’t sell it speaks volumes about his confidence in this idea and how he is going to back it up. He knew he could always make it better.” Adds Thundiyil: “They have already connected millions of people through this and there is always more room to grow.”

What is an initial public offering and what other Internet companies do you know about that went public in the past few years?

How will going public change Facebook? Do you think it will change the user experience?

Shruti Thundiyil, one of the high school students quoted in this story, is starting an Internet company. Do you have or are you also starting an online venture? Share your story with other teens on Facebook at http://www.facebook.com/whartonhs.

4 comments on “Facebook Files for an Initial Public Offering”