Biotech Innovation That Breaks Down Plastic and Feeds the Fish 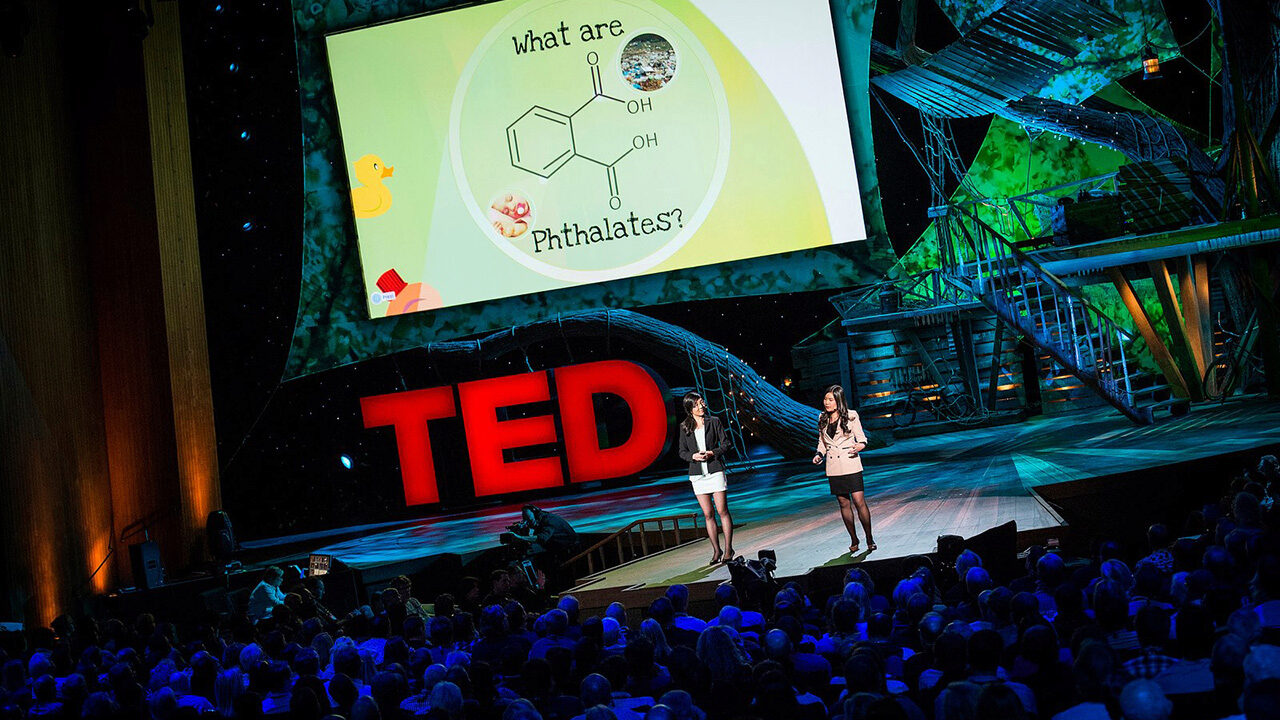 According to researchers, 8 million tons of plastic are dumped in the oceans each year. This is a huge environmental threat, and one that people are addressing in different ways. Take, for instance, some cool news out of Dana Point, Calif., this week. Students at Dana Hills High School are working with elementary-school children to build a whale skeleton sculpture with single-use plastic bottles to raise awareness of plastics in the ocean. The finished sculpture will be 30 feet long, by 9 feet tall, by 8 feet wide. Senior Alyssa Boscardin told the Dana Point Times newspaper, “Many people don’t realize how big an effect plastic has on our oceans. Seeing it as part of a sculpture representing the carcass of a whale illustrates how deadly the problem really is.”

Boscardin’s sentiments most definitely resonate with Miranda Wang, a senior at the University of Pennsylvania studying cell and molecular biology, engineering entrepreneurship and philosophy. Wang is cofounder and CEO of BioCellection, a startup that uses biological techniques to create a new kind of fish food using plastic waste. She recently spoke with KWHS’s Nithya Kasi, a Wharton freshman, about her science-based business, her public-speaking experience, and how she defines success.

An edited transcript of the conversation appears below.

Knowledge@Wharton High School: Miranda Wang, a senior at the University of Pennsylvania studying cell and molecular biology, engineering entrepreneurship and philosophy, is cofounder and CEO of BioCellection, a startup that uses biological techniques to create a new kind of fish food using plastic waste. She’s here today to talk with Knowledge@Wharton High School about her life as an entrepreneur, as well as her involvement with TED [a nonprofit organization devoted to “ideas worth spreading” that holds TED talks featuring invited speakers who talk on all kinds of subjects].

KWHS: What sparked your idea to use biotechnology to solve the growing global problem of plastic pollution? And what kind of progress have you made in this area?

Miranda Wang: This started out when I was in high school. It was a really cool opportunity. I took a trip to a landfill the summer after my junior year. I think what really hit me was not just that the landfills are so massive or even just looking at our waste after it is taken out of the household, but looking at what I call the afterlife of plastics, and realizing that plastics are this tremendous proportion of all the waste that we have. [I also realized] from speaking to the people at the landfill that plastic is the main problem. It seems to have immutable afterlife: Even though the pieces break, they disintegrate into smaller and smaller pieces. They never chemically break down.

At that time, I was an aspiring science student. I wanted to see if there [were] ways to pursue finding solutions for this environmental problem that has a lot of huge social effects — using science. There was a unique opportunity to do this during a science competition. So, my best friend at the time — and now cofounder [Jeanny Yao] — and I actually did this as a research project with Professor Lindsay Eltis at the University of British Columbia. And [through] this project, we ended up competing at the national level and then taking this to speak at the TED [2013] conference [while I was a high school student at Magee Secondary School in Vancouver, British Columbia, Canada]. Throughout my entire time at Penn, I’ve continued working on plastic — the research for plastic biodegradation, as well as looking at the health effects of plastic pollution. That has led to this startup that we founded called BioCellection.

This startup was founded last year in May. And we’re in between a seed stage [the initial capital used to start a business] and a series A [a company’s first significant round of venture capital financing]. We’re about halfway finished building a genetically modified bacterium that can break down plastics about 80 times faster than the best known organism. We currently hold two provisional patents for this technology. One of the products downstream of the science is that after the bacteria breaks down the plastic waste, because of the chemistry that happens in the cell, the cell is able to do this in a completely non-toxic way. So, the cell protein can actually be used to feed fish. We’ve demonstrated a 73% mortality rate reduction in salmon fish this past summer through feed trials.

KWHS: Wow, that’s amazing. Delving deeper into your appearance on TED, that seemed like it was a major influence in your entrepreneurial interests. Can you share with us how you got involved with that and what you’ve taken away from your experience?

Wang: It was a really serendipitous opportunity to have been invited to speak at TED. I have to admit that before we were invited to get involved with that, I actually didn’t know very much about the TED conference. So, I was very surprised [during my] senior year of high school when I received an e-mail right after we competed in the science competition. I was in chemistry class and received an e-mail from the content director of TED inviting me to basically go for an audition event. It was 2012, and TED was doing a really cool multi-city tour. They visited 13 cities around the world and hosted 13 different audition events. About 300 different speakers from local areas auditioned.

We were invited for that opportunity. There was a live audience, and everybody got to vote for their favorite speakers. From there, we were selected to speak at the main stage. This is definitely a very unconventional path to becoming a TED speaker. But I think this experience has really exposed me to a lot of the leading thought leaders in this field and has in many ways motivated me to go on an unconventional course at Penn and become an entrepreneur.

KWHS: How would you say your high school experience shaped your interest in these fields, like entrepreneurship, public speaking and environmental protection? Do you feel like you had a chosen direction even before you graduated from high school?

Wang: Now that I think about it, definitely yes. In high school I was part of a leadership program that was my school’s version of a magnet school or an IB [International Baccalaureate]. This program trained me in a lot of skills for public speaking. It gave me a lot of preparation for teamwork and leadership. Now that I think back on it, a lot of these skills that I have are actually soft skills [that were developed in] early teenagehood. And there’s also my interest in science. I grew up in Vancouver, Canada. Vancouver is a place where people are very environmentally conscious. I was always involved in a lot of extracurriculars. My [BioCellection] cofounder and I were co-presidents of our high school environment club, and we built an organic garden from scratch in the front of our school. This wouldn’t have been possible if we didn’t have teachers in high school that supported us. All these things led to this combination of interests I have today from a very early stage.

KWHS: Taking that one step further, how has your college experience likewise shaped your interests and helped them to grow and mature?

Wang: Even after I spoke at TED, it was not obvious to me that people could make a living by doing science entrepreneurship. Even though you know there are people running biotechnology companies and biomedical-device companies, it’s not something I thought I could do, especially as someone who is still an undergrad and obviously has a long way to go to do some basic research in this area. Not that many people are working on plastic pollution. And nobody is currently working on a technology to solve the plastic pollution problem. So, it really wasn’t something I thought was possible until I came to Penn and started taking classes. My major is in molecular biology and one of my minors is engineering entrepreneurship. So, I took classes in both Wharton and also in engineering to really learn how to manage high-tech startups. Then I realized this is something you can learn, and you can tangibly apply an assortment of different skills to make your vision become a reality and make a high impact on the world. Penn has empowered me to do all of these things.

KWHS: You’ve spent a lot of time immersed in the entrepreneurial culture here at Penn, as well as working with high-caliber students and adults. What do you feel defines success? And what characteristics do you value in the people and entrepreneurs that you admire?

Wang: That’s pretty hard. One thing I value a lot in people I work with is sincerity. Some people that I really look up to — some of my best mentors — are the kind of people who the first time you talk to them, you just feel that connection. You feel like they are committed to helping you, and they’re very genuine about it. There’s that level of trust and rapport that builds in the first minute. I think every successful person I know has that certain, I would even call it charisma, to have other people be able to trust them and to really be able to behave in a consistent way, follow up and help people so that you can continue building on this relationship. In business, especially for someone who’s so young like me and so inexperienced, a lot of what I’m able to do depends on the relationships that I have and the mentors and ideas that I’m able to get.

In Silicon Valley, [people talk about] paying it forward. That means that before you go out and reach out to someone for help, think about ways that you can contribute to this community. It becomes more like everybody’s mutually helping each other, as opposed to I’m trying to take from this community.

KWHS: How would you define success based on your experiences?

Wang: That’s a very difficult thing to define. I think success can be explained in many ways. The most important thing to me is people doing what they believe in, despite the odds. [You have to] have the courage to do that because it’s difficult, especially being a young person in college where the culture — especially in the Ivy League — pushes us towards certain notions of success. I’m in biology, so obviously I was pushed towards pre-med, and at Penn in general, there is a lot of hype for Wall Street. When I realized that I didn’t fit into either of these niches, I needed to redefine my notion of success. To me, that was doing what I think is right and what I think is going to excite me every single day, despite going against the norm.

How has Miranda Wang taken an unconventional path since high school? How does this relate to her definition of success?

What is TED? Using the related stories and links accompanying this story, research TED to find out what it’s all about. Miranda and Jeanny were high school seniors when they were invited to give their TED talk. What skills do you think they developed from this experience? How has TED helped their college and career paths?

Miranda talks about valuing sincerity in the business people she has met. How do you define sincerity? How might you start to better understand what she means by being consistent, genuine and building relationships?