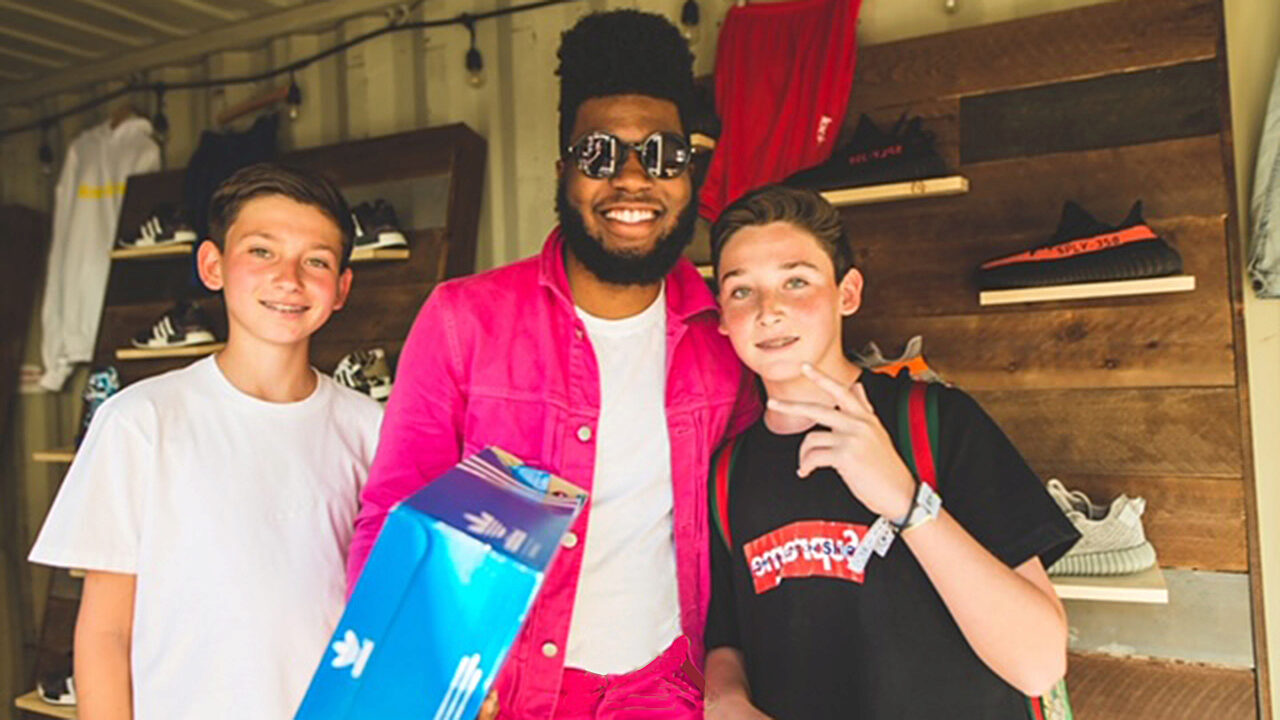 In the obsessive market for limited-edition sneakers, brand awareness and innovative marketing strategies generate major buzz around new releases. The Nike Lebron 17 in the new Bron 2K colorway is a great example. Earlier this month, Nike partnered with one of the most popular basketball simulation video games – NBA2K20 – to sell a new collection of sneakers known as “Gamer Exclusives.” In this unique partnership, Nike’s SNKRS app connected with a new in-game mode, giving players the chance to get access to a pair of limited edition sneakers – the Bron 2K. The first challenge was yesterday, and the sneakers sold out quickly.

You can bet that Drew F., a high school junior from El Paso, Texas, has been watching this latest promotion closely, with both a professional and personal interest. He and his brother Jamie have been collecting limited-edition sneakers for years, enticed by the cool colors and design rarities. That passion, combined with the legacy of their grandpa Jerry Rubin, who founded a wig company in his early 20s that ultimately grew into Helen of Troy, a public hair care consumer-products company with more than $1 billion in annual revenues, fueled the brothers’ entrepreneurial thinking.

“We just kept building up our inventory of sneakers and selling to stores in Los Angeles and New York whenever we were on vacation there,” says Drew, who is 16. “We were making more and more connections. We realized we could turn this into something big with all the connections we had and the inventory we’d amassed.”

And that’s just what they did – turn it into something big. In 2016, Drew and Jamie, who is a sophomore, launched Kickpin, a boutique for rare, limited-release sneakers from Adidas, Nike, Jordan Brand and others that has both an online store and a storefront in El Paso. As the business approaches its three-year anniversary, the brothers say their company – which includes a new Concrete Hills clothing line – has done almost $1 million in total sales.

“Lil Yachty came to one of our first-ever popups and made an Instagram post about us. We gained thousands of followers and built many customers off of that post.” — Drew F., Kickpin Co-founder

How do you build a hobby into a thriving business? It helps when the product is in hot demand and short supply. Also, as Drew suggests, it takes the right connections, which has been a game changer for these entrepreneurs-in-training. Here, the brothers share a few key marketing strategies that have elevated Kickpin’s image in the past three years and helped them become players in what Financial Times values as the $2 billion resale market for limited-edition sneakers.

The Celebrity Circuit. Celebrity product endorsements are a time-honored marketing tool. Barbara Kahn, a Wharton professor of marketing, has said, “You want to choose a celebrity who evokes positive emotions in your target market. You want someone who has a broad appeal, someone who creates buzz.”

For Drew and Jamie, It all started with Khalid in February 2017. The then 19-year-old, rising R&B star from El Paso heard about some other teens who had just opened a limited-edition sneaker store in his hometown. How did he hear? Well, the brothers may have reached out to him and/or his manager to see if he wanted to stop by. So, he did, and that was the start of something great. From there, the brothers began to work the celebrity circuit to help market the Kickpin brand – particularly rap stars and athletes who are often the first to line up for the latest limited-edition merch. “The celebrity that created the most buzz for Kickpin was when Lil Yachty came to one of our first-ever popups and made an Instagram post about us. We gained thousands of followers and built many customers off of that post. It really put us on the map. We now have a very close relationship with him, and regularly sell him sneakers,” says Drew, adding that Kickpin’s biggest single sale to-date was in 2018 to Lil Yachty, who bought two pairs of off-white Jordan 1s for around $5,000. “Almost all of the relationships that we have built with artists have been through other artists that we’ve met that have brought us together with them,” notes Jamie.

Post a Pic. Social media – namely Instagram – has been a key factor in growing Kickpin’s celebrity relationships, and an effective marketing strategy to get the word out about its sneakers and clothing line. Kickpin’s posts feature both brothers posing with the likes of singer Billie Eilish, rap group Migos, NFL running back Aaron Jones, rapper Quavo and even actor Kevin Hart. Drew and Jamie have showcased all their transactions (their celebrity posts always feature them holding Kickpin bags) on Instagram, sometimes seeding their celebrity connections first with a cool pair of kicks. “Once we met one celebrity, we could send him a pair of sneakers in exchange for an Instagram post with our company, and then make a partnership with him,” says Drew. These shoutouts from influencers have been invaluable in promoting the Kickpin brand. In addition, the Frank brothers have used their own social media accounts to double the impact. “I personally have 20,000 followers on Instagram and Jamie has around 15,000,” says Drew. “That attracts a lot of people to our store because they see our following. They know we are trustworthy and have lots of customers.”

Wharton marketing professor David Reibstein has suggested that marketers tread carefully online. “If you’ve got a good or funny ad, or a really big celebrity, it could have a much broader reach with social media. But there’s a down side to it, too,” he told our sister publication Knowledge@Wharton. “If your ad [makes] a faux pas, or you have a celebrity who is inconsistent or runs counter to your brand, it could get more negative attention…. There’s an old saying that there is ‘no such thing as bad publicity.’ But that’s not entirely true. You do want people talking about your brand, but you want [the chatter] to be positive or neutral.”

Pop-up Appeal. And about that El Paso Kickpin store. It’s not open all the time, a marketing strategy that has accelerated the demand for the company’s products. It is a so-called “pop-up” strategy, which Wharton’s Kahn has called “new, fun and something different.” Likening the strategy to luxury brands, she has said, “If too many people wear it, it’s not a luxury anymore…There’s a paradox if you sell too much of something…[Pop-ups] are a way to make it exclusive and special because of the time period.”

Kickpin only opens once a month on the weekend to keep it exclusive. “We want to keep people interested in our limited product, and it works,” says Drew. “One time someone lined up for a week to get our shoes. This also gives us time to replenish our sneaker stock and amass more inventory.” And, of course, entice artists and agents who might be traveling to El Paso (known for its concert music scene) to stop by the store. Kickpin also has an online store, which accounts for some 50% of its sales. Along with the pop-up approach, Drew and Jamie stage giveaways, providing a customer (through a lottery) the opportunity to buy a highly limited sneaker at retail prices, which is almost 10 times less than market value. Most of Kickpin’s sneakers sell for an average of $300-$400, while Drew says they have sold pairs for upwards of $3,000. Oh, and it’s not always sneakers, or even clothes. Rapper Travis Scott teamed up with General Mills this June to create special-edition boxes of the cereal Reese’s Puffs that Kickpin sold during a pop-up for some $50 a box.

Soles and Soul. Even though the prestige and hip factor of owning limited editions of popular sports apparel brands is a high-priced play (Drew claims that a pair of Nike Yeezys signed by musician Kanye West that he has in the store could garner $20,000 if they were for sale) – the Kickpin founders say it’s not all about the money. A company’s values are woven into a brand and, therefore, its marketing and outreach, and Kickpin has nurtured a giving approach. Drew likes to say that his personal generosity quite literally helped to launch the business. In 2016, he was featured on Good Morning America for using the entire $30,000 he raised at his Bar Mitzvah to buy 400 pairs of shoes for a public elementary school in a low-income neighborhood. He and Jamie, who donated his Bar Mitzvah earnings a few years later to students in Israel, have continued to prioritize community involvement. Last year, they started the Kickpin Foundation, a nonprofit organization that uses a percentage of Kickpin proceeds to provide children with new sneakers. So far, the foundation has donated 4,000 pairs of shoes. They also negotiated a deal with Jordan Brand (through which Drew was honored along with Hollywood’s Spike Lee and others for his generosity) for a special annual donation of sneakers that come directly from the big-name company.

Both Drew and Jamie say they are focused on balancing Kickpin with school demands in hopes of attending college in the next few years. Until then, pop-ups, Black Friday deals, and anniversary giveaways in December are on the agenda. “We’ve been so motivated and worked so hard,” says Drew.

What is marketing and how has Kickpin creatively built its brand?

Do you own limited-edition sneakers? What is the appeal? How many pairs? What aspects of this profile resonate with you? Tell your story in the comment section of this article.

What are your thoughts on Kickpin’s retail approach of both online and a pop-up store? Do you think this makes sense given the current retail climate? Why or why not?