Popular TV shows like Law & Order and CSI have given lots of people a glimpse into what it means to have a job in the District Attorney’s office. But how realistic is the portrayal? KWHS explores a career as a prosecuting attorney – where you will get your day in court, and then some.…Read More 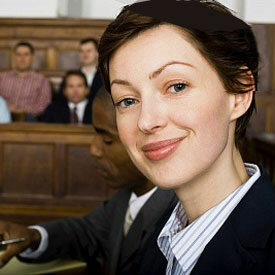 Justin Shur’s early career had all the drama of a season of TV’s Law & Order. Many young lawyers have to wait months or even years to be in charge of a court case that is tried in front of a jury. But at the Manhattan District Attorney’s office in New York City, Shur got his chance just one week into his job as a prosecuting attorney.

It was a minor prostitution case, and Shur won it after a short trial. But for the newbie lawyer, it was a rush that wouldn’t soon wear off. Shur spent more than four years at the district attorney’s office before leaving to work for a private law firm, but he missed being a prosecutor so much that he later spent another four years as a federal prosecutor trying complex corruption cases across the country. He now works at a private law firm in Washington, D.C., as a defense attorney.

“[The Manhattan DA’s office] is the kind of place where you can get off an elevator and someone walks down the hallway, hands you a file and you’re picking a jury in 15 minutes,” Shur says. From flying in helicopters to view crime scenes to pulling all-nighters in court, Shur says that being a prosecutor was the best way he could imagine to launch his law career. “You’re able to a do a high volume of less-complex cases. It means getting in court as often as possible and it allows you to figure out how to get completely comfortable in a hurry.”

Argumentative Is an Advantage

Prosecuting attorneys – often called district attorneys or state’s attorneys, depending on the local custom – serve as the government’s lawyers in cases involving individuals accused of breaking laws. It is one of the areas where law school grads can find jobs. Attorneys can specialize in many different areas, including defending people accused of crimes, helping people and businesses navigate tax laws and representing people who are getting divorced.

While a job as a prosecutor can pay less than positions at a law firm, it includes a lot of time arguing cases in front of a judge and jury. It also requires thinking on your feet and being comfortable with speaking in public.

That is what attracted Shur to the Manhattan DA’s office, and it is what’s driving El Paso, Texas, high schooler Edgar Llamas to explore the career choice as well. Llamas, who will be a senior this fall at Franklin High School in El Paso, says he has a persistent argumentative streak. “I am one of those kids who always argues with his parents,” he says. “One day, I looked up legal jobs, and this one really caught my eye…. I figured prosecutors might sometimes [prosecute] an innocent person, but mostly they’re bringing justice to the courtroom. Bad people are out there who need to be in jail, and I think prosecutors are really noble people for [helping to put them there].”

To nurture his interest in the law, Llamas enrolled in the Law School Preparation Institute’s high school law camp at the University of Texas El Paso this summer. The three-week course, first held in 2009, allows high school juniors and seniors to learn about the law and develop the skills needed to succeed in college and law school. The program emphasizes diversity in the legal profession and encourages students to pursue a legal education. Participants hear from different types of lawyers, visit community legal organizations and role-play during mock trials.

The percentage of women graduating from law school has been on the decline since 2004, according to a 2011 report by the Institute for Inclusion in the Legal Profession, but that’s not deterring Aleena Montoya, another participant in the law camp, from exploring a legal career.

Montoya says that she’s also interested in being a prosecutor, a position she often fills in teen court, a program in El Paso high schools in which teens who commit minor crimes can plead guilty in a regular court, then head to teen court for sentencing. An adult volunteer serves as the judge, and students are the prosecutors, defense attorneys and jurors.

Montoya prefers serving as a prosecutor because she would rather try and convict people who break the law than defend people who might be guilty. “You’re fighting for what you believe is right; you’re fighting for justice,” she says. “I want to be able to help people prove right from wrong.”

The road to a prosecutorial career will be a long one for Llamas and Montoya. They will first have to do well on the LSAT or Law School Admission Test. It is similar to the SAT in that your scores help law school admissions officers decide if you are a good fit for their school. Students usually take the test while finishing up their college bachelor’s degrees.

There are more than 200 American Bar Association-approved law schools across the country. They take three years to complete (once you have a bachelor’s degree), and the competition for jobs is stiff. According to a January 8, 2011, New York Times article, 15,000 attorney and legal staff jobs have been cut in the United States since 2008. A 2012 study by the National Association for Law Placement showed that only 65% of law school graduates got a job practicing law, the lowest percentage in the group’s history. Law school grads must also take the Bar, a 200-question exam given twice a year for certification to practice law in a particular state.

Shur says that while many legal TV shows get the details about the law wrong, Law & Order does the best job depicting the frantic pace of being a prosecutor – and the oddities that can accompany a high-profile case. Shur remembers one case in which he was prosecuting a boxer, James “The Harlem Hammer” Butler, who sucker punched his opponent, Richard “The Alien” Grant, after the match was over. Grant’s jaw was broken, ultimately ending his boxing career.

Adding to the drama was the fact that the match was a fundraiser held after the September 11, 2001, terror attacks in New York City, and the audience was full of New York City police officers. The incoming police commissioner, Raymond Kelly, ordered Butler arrested at the match. Of his first job, Shur says: “It was everything I thought it would be. I was thrown into the fire. For four and a half years, I handled dozens of jury trials. It was just fantastic.”

Why does Justin Shur feel as though his job in the District Attorney’s office in Manhattan was a good preparation for his career in law?

What are the steps you must take before becoming a lawyer?

How competitive is the field of law?