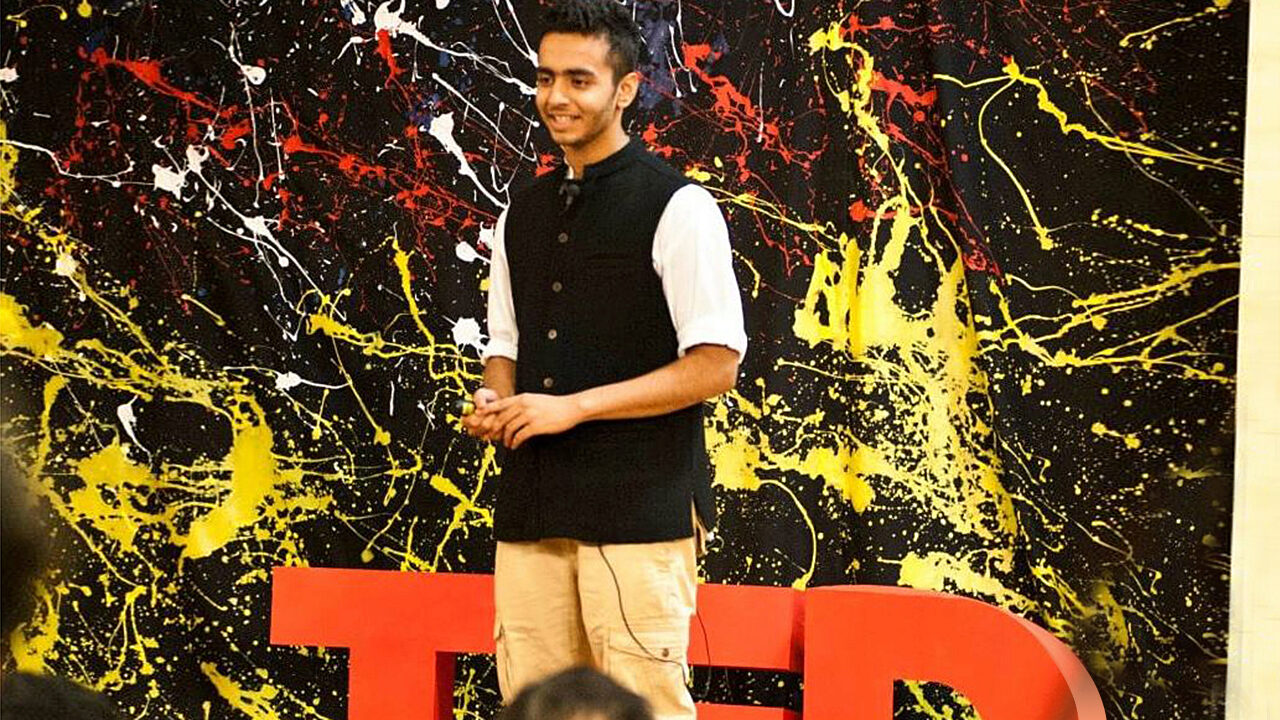 Angad Daryani, a 17-year-old in India’s commercial capital of Mumbai, calls himself a “social tech entrepreneur.” Few can argue that he has lived into that mission, even at such a young age. A self-proclaimed “maker” who believes in the power of curiosity, open-sourcing and online tutorials, Daryani has built a lot of things and, as he says, he intends to build a whole lot more. He is a true champion of technological innovation, and his latest project embraces engineering that meets a market need.

Now in his final school year at Mumbai’s Jamnabhai Narsee International School, Daryani is putting together a business plan to begin manufacturing a low-cost Braille e-reader that he has been developing for a few years. The product makes PDF and Word documents accessible to people reading in Braille by using pins to project characters above the surface on an iPad-like device.

Our KWHS team found Daryani’s “eye-pad” project especially intriguing given similar entrepreneurial ideas that we have profiled in our business journal. Take, for instance, Shubham Banerjee, a teen from California’s Silicon Valley who created a low-cost Braille printer to offer the blind and visually impaired a more affordable printing alternative. Banerjee, with the help of many partners, set up Braigo Labs to commercialize his idea. This March, Banerjee received “The Tommy” 2016 Edison Innovation Award.

Around that time, KWHS readers met Rajat Bhageria, the founder of ThirdEye Technologies, a startup that develops software to help the visually impaired through object recognition from auditory feedback. We caught up this week with Bhageria to better understand this fascination with the market for the visually impaired.

“There seems to be a bit of a boom in the number of young people working on products and startups for the blind and visually impaired,” notes Bhageria, who just turned 20 and finished up his sophomore year at Wharton. “What’s even more interesting is that many of these founders actually don’t have too much personal prior experience dealing with the visually impaired. Many of them are college students who are capitalizing on the power of cloud computing and the ease of learning software development nowadays to build a product that they think can have a difference. After all, what’s a better way to make a difference in the world than to help empower the blind and visually impaired? At the end of the day, it’s incredibly exciting to see people solving real problems in the world.”

Making a difference, yes, and also developing some serious business skills in the process. Daryani’s Braille e-reader business plan is as hard-nosed as they come. It fleshes out the product’s development from the stage when the idea itself took root, through raising the investment capital, identifying markets, plotting manufacturing and distribution strategies and talent management.

The team behind the Braille reader includes Daryani and three others — Vijay Varada, Raghavendra S.H. and Ankit. Varada actively manages the venture.

They visualize a huge global market for their so-called “Virtual Brailler.” According to Daryani, the product would find its market within the worldwide population of visually impaired people, including those with low vision, of about 285 million. He thinks an affordable price would be about $100 each. Similar other products retail for about $2,000 each, he says.

Daryani expects the Brailler project to turn in “some modest profit.” But he anticipates more commercial success with two other projects that he and Varada have created. One is a low-cost 3-D printer, and the other is a low-cost, do-it-yourself kit to learn skills such as programming. He has said that his goal is to “build more tech developers and makers so that they pick up real-world problems and come up with elegant solutions to those problems using technology.”

“Meeting people who face problems” is the best way to identify a market need, says Daryani, who has been innovating since he built his first tech project – a robot – at age 8. He has garnered attention for his many technological successes, including a mobile electro-cardiogram. The idea for the Brailler e-reader emerged when he was part of a few MIT Media Lab projects in health technology between 2013 and 2015.

For those projects, MIT had gathered a group of 100 people including engineers, designers and businesspeople. They came up with 25 product ideas and later tested prototypes. Daryani first began to work on building an assistive device for reading for the visually impaired.

Daryani’s team tested the product at a hospital that is part of the L.V. Prasad Eye Institute in India’s Hyderabad city. He later spoke about the product in a TEDxGateway event in December 2013 and later at TEDx events in Bangalore and Singapore. He also got to make a presentation on the product to prominent Indian industrialist Ratan Tata, who happens to be a big supporter of MIT Media Lab projects in India. Potential buyers and philanthropically minded investors began to take notice.

Initially targeted for the Indian market, Daryani prefers to build an affordably priced product. For the U.S. market, he would employ a different strategy that is not as low-cost, he says. Inexpensive labor costs, low research costs and limited regulatory requirements in India provide the foundation for a low-cost offering, he says. “It’s a low-margin, high-volume strategy.”

Daryani’s math pegs the initial required investment in the Virtual Brailler project at Rs. 50 lakh (about $75,000) to begin commercial manufacturing. While the search is underway to find investors for that, he wants to build on the interest it has aroused among philanthropic donors. The way it would work is for those donations to go to schools for the blind to help them buy the Braillers.

Approaching such donors requires a unique strategy, suggests Daryani. “I don’t directly approach philanthropists,” he says, although he has met a few of them in his networking rounds. “I use somebody influential in the middle to make that transaction happen.” He explains why he prefers that indirect approach: “You have clarity because the donor would be open with the middleman and the middleman would be open with me,” he says. “Directly approaching big people doesn’t always work.”

At a price of $100 or Rs. 6,000 each, Daryani expects schools for the blind in India to constitute a big chunk of his market. He notes that in Mumbai alone, these schools reach about 5,000 prospective users. Many schools emailed him requests after his TEDx talk in 2013 (see Related Links), in addition to outreach from parents of visually impaired people.

Daryani believes in the sales and distribution model that Tesla CEO Elon Musk uses for his electric cars – all company-owned dealerships and no franchisees. “It eliminates the middleman,” he says. He explains that such a model would make sense because his venture could directly satisfy customer needs with little time lag. “We could make these devices with machines, soldering in components, at the rate of an hour per device,” he says.

Such a manufacturing process would also mean low working capital needs, says Daryani. “We keep the product simple, so that we can procure components easily and just in time,” he adds. Two broad groups would make up his market: schools or colleges and individual customers. Already, about 1,200 potential buyers have expressed interest, he says.

Sourcing the components for the Brailler involves few complexities. “In terms of suppliers, we have way too many options,” says Daryani. He also wants the product to be well engineered and produced. “The product should never come back for service – it should be stable and not have too many bugs,” he adds. “Quality control is very important in building low-cost tech products.”

The only major challenge Daryani and his team face in developing their product involves the pins, or actuators, that make the text in documents accessible in Braille. Designing a product with multiple pins that is also portable, lightweight and easy to carry is not easy, he says. Over the past year, Varada and Daryani perfected the pin designs, but their next challenge is to find reliable suppliers. They have identified a few Korean suppliers for the pins, and have begun the process of negotiating with them.

Another Daryani rule is to “have the right persons working at the company — divide the work among people with the right skill sets.” Oftentimes in startup ventures, many of the founding members end up doing the same things. He also wants to keep costs low by hiring interns from colleges who could design their work in the venture as part of their final-year projects. He used a similar approach for the 3-D printer project. That route has its pluses and minuses: “The problem is the interns are not on the same plane as you and are experimenting at your cost,” he says. “But that is worth it. It is better than hiring professionals and paying them huge salaries.”

Daryani juggles his studies with his tech creations, but he would rather not do it that way. He cautions other young entrepreneurs that acting on your innovative business ideas might require tradeoffs. “It is not the best idea to work on your education and your startup at the same time – one of them might suffer,” he says. He not only ended up delaying the launch of his products, but his education also took a hit. “I wanted to go to MIT, but my grades weren’t top-notch.”

Even so, Daryani has big plans. He is headed in late August to the University of Massachusetts at Amherst to begin work on a degree in electrical and computer engineering.

Angad Daryani decided to become home-schooled in the 9th Grade (even though he is now back in a physical high school) because he said he was “sick of the fact that his curiosity was being killed.” He wanted to learn to answer questions by application. How do you respond to the DIY schooling movement? Compare the strengths and weaknesses of traditional schooling versus homeschooling or learning on your own through online tutorials. Do you think Daryani and others are onto something? Do you agree with a traditional schooling model? Why or why not?

Daryani has developed a detailed business plan for his Brailler. Discuss three areas of his business strategy. Who are his customers? What is his market? Product development? What does the manufacturing process look like? Why are donors important and how does he secure them?

Why does Daryani need different market strategies for India and the U.S.?

The KWHS business journal has published three articles about tech products for the visually impaired. Using the Related KWHS Articles tab, read the other two stories about Shubham Banerjee and Rajat Bhageria. Do you see any similarities between their stories? Differences?