Have you noticed how everyone is talking about startups lately? Maybe rather than launching your own company, you might want to explore the entrepreneurial culture as an employee. KWHS talks with experts and entrepreneurial types to find out the inside scoop on working for a startup. …Read More 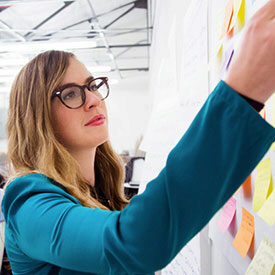 The Knowledge@Wharton High School portal features many stories about young entrepreneurs who are starting their own businesses – doing everything from selling bowties to stuffing socially responsible backpacks and creating innovative apps. This month during the PwC-KWHS Seminar for High School Educators in San Francisco, Calif., — in the heart of Silicon Valley — professor Doug Collom said, “You can’t find a seat at the coffee shop down the street because everybody is doing start-up companies.”

If you’ve been thinking that you want to be part of this energetic and innovative entrepreneurship community, but you’re not sure what type of business to launch, then why not test the waters as a start-up employee? According to Helena Yli-Renko, director of the Lloyd Greif Center for Entrepreneurial Studies at Marshall School of Business at the University of Southern California in Los Angeles, countless startups are pursuing young people to help their companies succeed.

[tweetthis alt=”” hashtag=”” url=””]“Many students are so focused on landing a job with a big company right out of college that they don’t realize all the opportunities available to them at a startup,”[/tweetthis] says Yli-Renko. “Young grads can gain a tremendous amount of experience and insight into every side of how a business operates much faster than they would at a big corporation.”

A Kickstart at Kickboard

A year before Edie Feinstein graduated from Cornell University in Ithaca, N.Y., with a degree in industrial and labor relations, she found herself interviewing with big consulting firms and feeling unenthused by the thought of working for one. Around the same time, she attended an on-campus recruiting event hosted by Venture For America (VFA). Modeled after Teach For America, VFA matches college grads with startups in re-emerging cities like Detroit, New Orleans and Las Vegas. “I remember leaving the session and having this ‘Aha’ moment,” says Feinstein. [tweetthis alt=”” hashtag=”” url=””]“The idea of working with a small company in a new city, having a lot of responsibility and using my skills to make an immediate impact really excited me.”[/tweetthis]

Upon acceptance into VFA’s fellowship program two years ago, Feinstein was matched with Kickboard, a tech-education startup based in New Orleans where she worked up until a few months ago. Classifying herself as more of a foodie (someone with a passion for food), she decided to pursue an opportunity with Dinner Lab, another New Orleans-based startup, which unites undiscovered chefs with adventurous diners. “If it weren’t for everything I learned at Kickboard and from my VFA fellowship, I may have never connected with Dinner Lab,” says Feinstein, who at age 23 is the company’s chief of staff.

While many young people such as Feinstein are finding their niche working in the start-up world, it’s not a perfect fit for everyone, points out Yli-Renko. The key to figuring this out is to start learning as much as possible about startups, while exploring some important questions about working for them. Do you understand the risk versus reward? What do you hope to gain? What skills can you bring to the table?

Working for a startup can be an exhilarating experience, allowing you to get in on the ground floor of what could be the next big thing – ask early employees of Microsoft, Google and Facebook. But despite all the hype, it’s not just about throwing parties and attending board meetings in flip flops, says Scott Gerber, the founder of the Young Entrepreneur Council (YEC), a Boston-based invite-only organization comprised of the world’s most successful young entrepreneurs. “It’s true that most startups are all about creating a unique culture that’s fun, dynamic and flexible, but [tweetthis alt=”” hashtag=”” url=””]with that often comes long hours, less pay, bootstrapping (using every resource at your disposal) and wearing a variety of hats from developing new products to fundraising to answering phones[/tweetthis],” says Gerber.

Joining Kickboard as its seventh employee, Feinstein recalls having barebones benefits with only health insurance. As the company grew to 25 employees, it added vision and dental, as well as an equity option, she says. “Having a small staff can create a close-knit environment, but [human resources] is most likely nonexistent,” says Feinstein. [tweetthis alt=”” hashtag=”” url=””]“If you have a problem, you have to talk directly with the CEO. That could make some people feel uncomfortable.”[/tweetthis]

Since startups tend to grow and change quickly, there can be a lot of uncertainty from one week to the next or even one day to the next, says Steven Gold, a professor of entrepreneurship practice at Babson Executive Education and Babson College in Babson Park, Mass. “The best startups to work for are generally those that have a clear mission that you believe in, are managed by an experienced founding team that you can learn from, are on solid financial footing, and that treat you well and promise to give you opportunities to learn and grow,” says Gold.

Startups can be excellent places to learn, build skills, and explore the idea of starting your own company. According to a 2014 study sponsored by Buzz Marketing Group and YEC entitled “What Millennials Really Think About Entrepreneurship,” 88% of aspiring entrepreneurs and business owners surveyed said they would like to work for an entrepreneur.

Reid Pearson of Portland, Oreg., has not forgotten about his plans to someday launch a business venture, but for now the 25-year-old says he’s happy to work for another entrepreneur. He’s gaining hands-on experience that he hopes to eventually apply to his own business. “This experience has allowed me to observe how every side of a business operates, and what works and what doesn’t,” says Pearson, who is head of operations for Fanlime, a New York City-based startup focused on delivering sports-related content, products and apparel. His ability to telecommute from Oregon has been a great perk, as well, he says.

Feinstein speaks to another start-up strength. When she joined Kickboard as its youngest employee, she was impressed by how much she was valued as an employee. [tweetthis alt=”” hashtag=”” url=””]“Despite my age and inexperience, I had a voice, as well as access to high-level employees,”[/tweetthis] she notes. “I was also given plenty of opportunities to learn and advance within the company.”

In the two years Feinstein was with Kickboard, she moved from customer support to product management, a position she points out is difficult to come by when you’re just starting out.

Startups hire new grads for a variety of reasons, says Gold. Sometimes it’s because they have the most up-to-date skills in areas like computer science. At other times, it’s because the founders are young and they want more young people who look and think like them. Another big reason is because grads are cheaper than people with years of experience.

According to Yli-Renko, startups hire people based more on potential then proven experience. They are looking for employees who are young, who can think outside the box and who are unconstrained by preconceived notions – basically, an employee with a clean slate, she says. If you are thinking about the start-up career path, Yli-Renko has some advice: “It’s essential to gain a clear understanding of entrepreneurship as early as possible,” she says. “You should take an entrepreneurship class or even work for a startup as an internship or summer job.”

Today, most colleges offer some sort of entrepreneurship program, including the University of Southern California, which has an entrepreneurship minor for any student interested, from music majors to medical and law students, says Yli-Renko. Business schools like Wharton often have a robust entrepreneurship culture on campus, offering many opportunities for students to meet and collaborate with young entrepreneurs, develop their own businesses and network regularly with a broader entrepreneur community.

As a student at Villanova University studying marketing and economics, Michael Best was intrigued to learn about business ownership. After enrolling in the school’s entrepreneurship minor program, he realized that his interests weren’t in starting his own company, but rather helping to grow someone else’s.

In 2011, he joined PeopleLinx, a software startup based in Philadelphia, as its first hire. Serving in a business development role, he helped the company grow from three employees to 35 in less than two years. “The entrepreneurship minor prepared me for that role,” says the 24-year-old. [tweetthis alt=”” hashtag=”” url=””]“I was able to come into a young company and contribute right away to growing it and setting the tone for future hires.”[/tweetthis]

Best, who has since earned the title of product manager, adds that one of the most important things a young person can bring to a startup is strategic communication, which goes beyond basic public speaking and phone etiquette. “You need to know your audience and tailor the message to them,” he notes. “For example, you might be selling coworkers on your idea, but you might have to position your idea six different ways depending on who you are meeting with.” He adds that a basic understanding of business law 101, hiring practices and accounting skills is critical to growing a company and often missing from job candidates.

“Finally, learn as much about the company, its mission and product as possible,” says Yli-Renko. [tweetthis alt=”” hashtag=”” url=””]“You’ll be expected to be just as passionate about the business’s efforts as its founders, and this will be easier if you believe in it yourself.”[/tweetthis]

What are some strengths of working with a startup? Weaknesses?

What are some strengths of working with a startup? Weaknesses? What does Edie Feinstein mean when she says about a startup, “Having a small staff can create a close-knit environment, but [human resources] is most likely nonexistent.”

Using the links below, explore one of the startups mentioned in this article or one featured on the Knowledge@Wharton High School portal. What did you learn about the startup? What interests you? Do you see yourself working there? Why or why not?

A ‘Zero-Generation’ American on What Shakes Him to the Core