Shubham Banerjee, a 13-year-old with a creative mind, is now learning what it means to found a start-up technology business in California's Silicon Valley. He is exploring his potential market, meeting with venture capitalists, planning the launch of his first product and still attending eighth grade at the Champion School in San Jose, Calif. And it all started with Lego Mindstorms EV3 and an interest in helping blind people have access to more affordable technology.…Read More 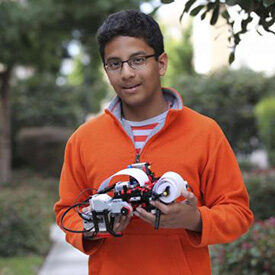 It’s a great time to consider the business of Legos — those fun connector toys that have been all the rage for years, packaged in kits that sometimes contain enough to build whole cities with Lego pieces that can be smaller than your pinkie fingernail. Legos are the talk of the toy market these days. In recent weeks Lego, the Denmark-based company that makes the popular toy, announced that it is unveiling a line of elf-themed toys targeted to girls and, thanks in part to last year’s The Lego Movie, is on track to deliver another year of strong sales. Word on the street is that Lego might even generate enough revenues this year to pass El Segundo, California-based Mattel, the world’s biggest toymaker.

Shubham Banerjee agrees with Lego’s bright business prospects, but from a different perspective. Banerjee, 13, is a proven Lego entrepreneur. And beyond the sheer innovation of a product that he recently invented using Lego, Banerjee is learning about finance and what it means to launch — and fund — a start-up technology firm. All this, while also an eighth grader at the Champion School in San Jose, Calif.

Banerjee used Lego Mindstorms EV3, a $350 Lego robotics kit, and a few items from the hardware store to create a low-cost Braille printer for education and home-use purposes that actually prints documents in Braille. Braille is a system of writing and printing for blind or visually impaired people, in which varied arrangements of raised dots representing letters and numerals are identified by touch. After researching Braille, Banerjee felt strongly that the blind and visually impaired needed a more affordable printing alternative. From there, he decided to learn how to read Braille in order to better understand his target market. He tried out seven versions of his Lego-designed printer before hitting on the right product in early 2014.

Braigo 1.0, the first version of his printer, cost $350 compared with about $2,000 for other such printers on the market. Banerjee received “a lot of feedback” from blind students and parents of the visually impaired. Incorporating some of that, he worked on a consumer version of the printer — Braigo 2.0 — and unveiled its prototype at the Intel Developer Forum in San Francisco last year. “This was my first prototype to show it’s possible to make a cheaper Braille printer,” he says. Additionally, he made his Lego creation open source, posting do-it-yourself instructions on the website www.makezine.com to guide other Lego and technology hobbyists.

It’s safe to say, however, that Banerjee’s project has evolved beyond the hobbyist stage into a genuine start-up business. Braigo Labs, the firm Banerjee founded in Silicon Valley’s hub of Palo Alto to commercialize his innovation, has “different advisors from academia, industry and partners for all the technical and knowledge expertise.” The Braigo management team includes Banerjee’s father Niloy “Neil” Banerjee as a mentor/coach and his mother Malini, a former business owner and now a teacher at Champion School. Banerjee lists himself as evangelist/founder; as a minor, he cannot yet be CEO, he says. Braigo will determine its future management structure when it enters its first venture-capital round.

Which brings us to a critical — and often daunting — aspect of Banerjee’s entrepreneurial journey thus far: the world of start-up capital. Every great idea is merely that until it attracts financial support, the money needed to turn a concept into an actual business. Braigo now has Intel Capital, an arm of Santa Clara, California-based Intel, as an investor, and other venture capitalists knocking at its door.

Venture capital is money available for investment in start-up companies and small businesses with a high potential for growth. Venture capitalists are the people who invest that money, and they often want significant control over how the business is run.

Deepa Gandhi, an entrepreneur who spoke to Knowledge@Wharton High School a few years back when she was first launching her upscale handbag business, had this to say about start-up capital: “There are a couple of different ways to finance your business. The ideal situation is that you’re able to self-fund,” noted Gandhi. “The second is what we’re doing, which is a friends and family financing round, so you keep it close, you keep it to the people whom you trust. If it’s a more capital intensive, more expensive business to build, especially in the tech space, you might want to look for larger institutional investors, [such as] venture capital or super angels or very, very high-net-worth individuals who can invest, like a venture capital fund. That comes with its benefits and also its downsides. You often have to give up control too early in your business if you go for the venture-capital funding, so it’s important to keep in mind the balance between getting the funding that you need and maintaining control of your business early on.”

Banerjee’s capital raising began with family. His father Niloy is the first backer of his venture with an investment of $35,000. It helped that Niloy has a career in technology and is a director of integration and validation at Intel’s education division. Several other investors had approached Banerjee before Intel Capital invested an undisclosed amount of seed or start-up capital in Braigo last November. With seed funding now in hand, Banerjee plans to move up to the first round of venture capital (or Series A) funding later this year. He isn’t talking about the amount that Braigo seeks to raise.

Banerjee says he has learned a lot about how venture capital works for start-ups like Braigo. He didn’t know what venture capital was all about, “but got a rough course on it at home,” referring to dinner-table conversations with his parents. “Venture capitalists look for something unique and the potential of the solution in the market,” he says. “Small [venture capital] firms focus on quick exits, while big reputed firms focus on creating value. They will take the ride with you and will work with you throughout the process. You need to choose whom you want to work with. Being desperate to raise money can become a problem, because you [might] not choose correctly.”

According to Banerjee, demonstrating an idea to investors in the initial stages of tech innovations is more important than showing off your comprehensive business plan. “When you are developing something unique like this, the impact it’s going to have is visible to everyone,” he says. “Business plans are not what attract investment. In the seed stage, the concept and the show-and-tell work better.” From that point on, the plan is to “experiment further and mature the concept,” he adds. The important thing now for Braigo 2.0, he says, “is to see the product enter the market.”

Braigo Labs plans a soft launch of its printer by the summer of this year by distributing some units to institutes for the blind for market testing. It will decide on a commercial launch when the product will be sold to the general market later in the year. “It is most important to have the product in the hands of the blind people who will benefit from it,” says Banerjee. “Our plan is take one step at a time.”

While he waits for Braigo Labs to take off, Banerjee has “lots going on” with other ideas in his innovation pipeline. He posts some of those on his Facebook page. “I believe in sharing,” he says. One is a new method to transcribe Braille automatically from any documents without the need to install special software.

Banerjee plans to incorporate his so-called “transcoder software” free with the Braille printer, thereby helping blind students and their parents save between $500 and $600 in software costs. He demonstrated that technology a few weeks ago at the technology festival Campus Party Brasil 2015 in Sao Paulo, Brazil. In the demo, his software processed a 160-page PDF document in 30 seconds and his Braille printer immediately began printing it. Henry Wedler, a doctoral student of chemistry at the University of California, Davis, who has been blind from birth and is now an advisor at Braigo Labs, says, “Having any document printed out in Braille in minutes without any user interaction would be nothing short of groundbreaking and incredible.”

In Banerjee’s case, Legos were the building blocks of a new and promising business.

Who is Braigo’s market? How is Shubham Banerjee’s creative idea filling a need in that market? What has he done to make sure that he understands that need?

The article states that every great idea is merely just that until it attracts financial support. What does that mean? Can you name at least three things that you have learned about financing a start-up business?

Did you play with Lego as a child? Do you still use Lego to engage your imagination? What is the greatest thing you have built using Lego? Can you think about how you might commercialize your creation or turn it into a business?

The 3-D Printing Revolution: Students Make their own ‘Big Bang’ with Businesses