The lives of business people and their companies often unfold like dramatic stories, rich with colorful characters and plot twists. Descriptions from these tales can get creative, including everything from “corporate raiders” in the 1980s to the term for today’s hottest tech start-up companies, known as “unicorns.”…Read More 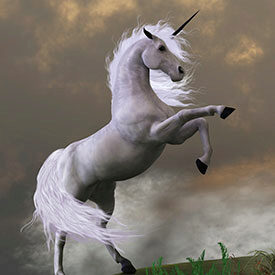 A fascinating article hit The New York Times technology section on August 18 with the headline: “Upstarts Raid Giants for Talent in Silicon Valley.” If it sounds like some kind of Jack-and-the-Beanstalk fairy tale featuring ogres doing battle in strange lands – well, it sort of is. In fact, this story involves one of the most mythical of creatures: the elusive unicorn. The Times story’s introduction pretty much says it all: “For the last year Google’s work force has increasingly been under attack from a herd of unicorns.”

The lives of business people and their companies often unfold like dramatic stories, rich with colorful characters and unique plot twists. Descriptions of these tales can get creative, introducing everyone from the likes of corporate raiders — the commanders of the takeover wars in the 1980s — to white knights, individuals or companies that acquire a corporation on the verge of being taken over by forces deemed undesirable by company officials.

The world of start-up businesses – the drama for which plays out regularly in California’s high-tech Silicon Valley — also has a language and script all its own. These days the unicorns are among the most high-profile new players. The unicorns are a group of hot start-up companies that are valued at $1 billion or more. As the Times article suggests, these young, fierce businesses are wielding their influence in the competitive tech hiring market, particularly as they entice engineers and other workers specializing in new technologies away from some of the big-name companies like Google.

The Origins of Modern-day Unicorns

Terms like the modern-day “unicorn” often originate in the press and are quickly popularized through traditional and social media. In this case, a mom of three, Aileen Lee, came up with the term unicorn to describe the strongest of emerging companies where people want to invest or work. Lee, a venture capitalist, plants seed money in companies that have a lot of growth potential, in exchange for equity or an ownership stake. In 2013, Lee had started her own investment firm called Cowboy Ventures. As she told The New York Times, she used “unicorn” to describe the phenomenon of especially hot startups because it was “readable and fun and not a word that had been used before to describe this.”

Start-up ventures usually begin with a person or a small group of people with an innovative idea that can grow or, in official terms, scale up. Let’s say you had an idea to make and deliver fresh lemonade to houses in your local neighborhood. When you scale up, you figure out a way to deliver that same service to consumer markets in your state, all over the U.S., and even around the world. A company’s growth prospects, as well as other factors like its management and the market value of its assets, help to determine its valuation, or how much the market believes that it is worth.

Here are examples of a few successful high-profile unicorn companies:

“Today, there are 125 private unicorn startups, worth a total of $472 billion, compared to 25 unicorn companies only two years ago,” according to a market research company called CB Insights. A private company is held by individual owners and investors, while a public company offers stock to the general public so anyone can buy a stake. Private companies go public with an IPO, or initial public offering. Tech gurus use the term “decacorn” for companies valued at more than $10 billion, and “superunicorn” for companies valued at more than $100 billion.

Facebook is perhaps one of the first companies with a valuation in the stratosphere. Valued at $15 billion when it went public in 2012, many called it a “nosebleed,” or overpriced. Today, Facebook is worth $238 billion.

Tech companies are staying privately owned longer these days, so valuations might be rising before the firms go to IPO. David Wessels, a Wharton adjunct finance professor, notes, “The valuations of [private] companies are based on fundamentally different economics. It’s more based on what these companies are promising for the future.”

As with all business stories, the unicorns’ prospects for success – or failure — will undoubtedly play out like great theater, influenced by such market forces as the potential bursting of the dreaded tech bubble, where a glut of overvalued companies go bankrupt causing people to lose billions in the stock market. It happened in 2000. Could it happen again? Possibly, especially as the herd of high-valued unicorns gathers in number and strength. Investors need to hope that their big valuations are not as fantastical as the unicorn description might suggest. Until then, these captivating start-up creatures, known for their creativity and agility, are really fun to watch.

What are unicorns and how did they get their name? What are a few examples of modern-day unicorns? Can you think of others?

What is valuation and how does it relate to a company’s growth potential? This article also talks about IPOs. Research the KWHS Facebook IPO (linked below) for more insight on tech companies that go public. Discuss what you learned in a group or with a partner.

Some people think of business as boring because they relate it to financial figures and a sea of numbers and technical concepts. Do you agree with this assessment? If so, why? If not, what helps bring business alive for you? What does it represent to you beyond the numbers?

One comment on “Business News Flash: Unicorns Do Exist!”