Why British Youth Say ‘Brexit Is a Disaster for Our Country’ 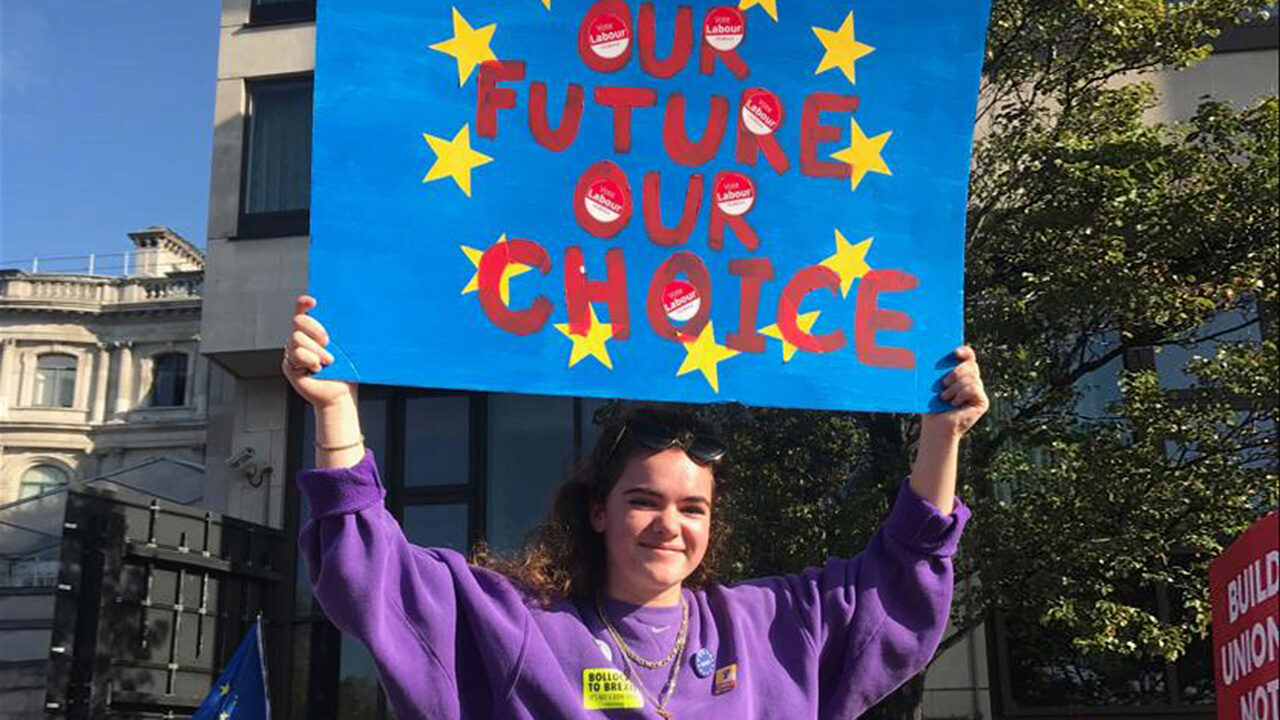 If you’re at all into European politics, Brexit is probably a catchphrase you’ve heard of in the past two years. In June 2016, the people of the United Kingdom (England, Scotland, Wales and Northern Ireland) voted to formally exit the European Union. Why is this topic still trending in the news today, and why should young people care about it?

What is the European Union?

The European Union is a collective of 28 countries in Europe, formally established in 1993 after decades of planning. Its purpose was to unite the continent into political and economic cooperation and avoid another global catastrophe after the wreckage of World War II.

As members of the European Union, countries gained benefits such as the removal of trade and worker migration barriers, favorable business deals, increased access to education and cultural exchanges, and increased bargaining power as a regional economy. However, in exchange, member countries had to give up a certain level of national autonomy economically and politically and operate under the jurisdiction of the European Commission, the EU’s governing body.

Why did the United Kingdom want to leave the EU?

As a country that had always been physically and ideologically more separate from continental Europe, there had been discussions in the U.K. about the value of being a part of the European Union. Politicians from Britain’s Conservative party believed that being a part of the EU harmed the country more than helped it, and favored greater British independence and power without the interference of the European Commission.

These voices crescendoed into the “Leave” campaign, which pushed for the U.K. to hold a referendum on whether to stay or leave the EU. On June 23, 2016, 51.9% of the country’s voting population chose to leave. The world was shocked, but the decision was final.

Why is Brexit such a big deal?

Given that the European Union is a relatively young entity, no country has ever before decided to leave. Now, lawmakers are tasked with taking Brexit through largely uncharted territories. It’s easy enough to vote to leave, but what does that legal process actually look like?

Currently, if all goes to plan, the U.K. is set to formally exit the EU in March of 2019 and go into a 21-month “transition period” that will end in December of 2020. However, before this happens, the U.K. wants to successfully negotiate a multi-issue exit deal with the EU, including agreements on how much money to pay the EU, the Northern Ireland border, and what will happen to EU and U.K. citizens living abroad in each other’s territories.

This deal has not been made yet, but both parties hope to reach an agreement in mid-November. If a deal is not met, the U.K. will still leave the EU, but with its hands empty and a considerably worse-off ending.

What role do youth play in Brexit?

A report by the London School of Economics found that the majority of youth surveyed “highlighted generational differences in Brexit preferences,” and that young people are overwhelmingly more likely to support staying in the European Union. After Brexit, many young people have spoken out in protest of the decision, with some even mobilizing to push for political change.

One such example of this mobilization is pro-European Union youth group, Our Future Our Choice (OFOC). OFOC’s mission is to educate and mobilize young people around the topic of Brexit, and more specifically, to push for a re-vote on leaving the European Union. Will Dry is 20 years old and one of the organization’s co-presidents. He paused his education at Oxford University in order to commit to the campaign full time, and spoke with Knowledge@Wharton High School about his work and hopes for the future.

Knowledge@Wharton High School: Your group has an interesting history with Brexit because, two years ago, you initially voted to leave the EU. What informed your choice to vote that way back then and why have you changed your mind since then?

Will Dry: The “Leave” campaign promised a lot of things. It was my first vote and I didn’t really know what would happen. I thought what they were saying sounded good. They were saying we could save money, we could do more trade with the rest of the world with countries like America, we could make our own laws [and] not be dictated to by the European Union, and we can have a better health care system. Now, as time passed, it became very clear to me and a lot of the country that those promises and expectations were not being met. For example, a record number of nurses and doctors have left this country since 2016. We’re not saving the money, we’re handing the EU £50 billion. We’re not doing more trade with the rest of the world, we’re cutting off our access to our closest trading partners in Europe.

KWHS: What is the U.K. youth’s outlook on Brexit in general? Are they overwhelmingly against Brexit?

“Members of Parliament have been scared or reluctant to debate us…because they don’t want to be humiliated by a young person who knows far more about the EU than they do.” — Will Dry

Dry: Young people are more united on Brexit than other political issues. If you look at the people who have gained the vote since 2016, they now have the vote. 87% of that cohort thinks Brexit is bad for their future. [British Prime Minister] Theresa May’s [conservative] party is doing badly [among youth]. We are absolutely united behind the idea that we should be an engaged, open country that wants to engage with the rest of the world, and not a closed, inward-looking one. We don’t want to be trapped on a small island with Boris Johnson [British politician and journalist]. We want to be working with Europe, working with America, to solve the big problems in the world. We want to keep the opportunities that we have that our parents and grandparents have had from the EU and not be limited by Brexit. Brexit is a disaster for our country, and it’s going to significantly limit [these] opportunities.

KWHS: What would you say is the biggest challenge that OFOC has to face today?

Dry: Two things. The biggest single problem we encounter is people thinking that they can’t make a difference. You don’t need to convince young people Brexit is bad, [but] what you do need to convince young people of is that they can make a difference. Young people [in the U.K.] are not a generation that take to the streets, make placards, get angry. We’re a generation that kind of mocks [politics]. There’s a lot of gallows humor about our future. MPs [Members of Parliament, the elected representatives of the people in the U.K.] need to hear from young people. Politicians do care about what young people think, but they need to hear it.”

The second [challenge] is the media. There’s a very hierarchical system in which the experts look down on young people and don’t take their views seriously. We’re not treated and respected as engaged activists [or] legitimate participants in the debate. We’ve often been in situations in which MPs have been scared or reluctant to debate us on television or radio because they don’t want to be humiliated by a young person who knows far more about the EU than they do. Some members in our group absolutely do, [they’ve] studied EU law and are great experts on the topic. Some of us know the topic like the back of our hand.

KWHS: How did you and your co-founders make the huge decision at such a young age to work full-time at OFOC?

Dry: One of my co-founders, Femi, used to work in Brussels for an EU law agency. Around October 2017, he decided to quit his job, which he really liked, and move from Brussels back to the U.K. because he was so devastated with what was going on. He didn’t have any money, he didn’t have any contacts, he didn’t have anything, but he decided he would dedicate his life to trying to stop Brexit and stand up for what he perceived to be the national interest. I am absolutely in awe of the sacrifice and decision that he made, and the effort that he’s put in since.

With myself, I paused my academic career, whatever you want to call it, to put my life into this. I think it’s very simple and easy, I don’t think it’s a big deal. I just think there are plenty of things where, if you care about them sufficiently enough, and this is definitely one of them, especially when you are part of the problem because you voted to leave in the first place, it’s perfectly right of you to put your all into it. I don’t like to do things half-heartedly, and once I realized that there is space for a youth group on this topic, and there is appetite from young people for it, and we can really make a difference through it, I thought, why not?

Dry: I’ll just go through today because every day is different! I helped organize an event in Norwich with Caroline Lucas, a prominent politician on the left. She’s a bit like Elizabeth Warren. I went through all the social media videos that we’re going to be putting out soon, which we’re quite excited about. I helped type a script for a crowdfunder, which we’re launching tomorrow. We’ve got a report coming out on Friday which the foreword has been done on ex-Prime Minister, John Major, so I’ve been coordinating with his team on a few things about when it’s coming out and what press we’re getting. More recently, I was plotting a few funny videos that we’re going to do and which I can’t really talk about, but yeah, that’s basically what the average day looks like. A bit of events, a bit of press, a bit of social media, etcetera.

But the definite [most fun] part of the campaign is doing events with young people at schools and universities up and down the country. Let’s say we’re doing an event at the University of Manchester — we will often invite the Manchester MPs to come to it, and the MPs realize just how against Brexit young people are. We’ll ask at the front [of the room], “Put your hand up if you want a vote on Brexit” or “If there was a vote tomorrow, who here would like to remain in the EU?” and 90% of the hands go up. The MPs are always a bit taken back.

Why did Will Dry and his Our Future Our Choice teammates change their minds about the United Kingdom leaving the European Union?

How do you feel about Brexit? Using the related links and related KWHS stories, explore the topic and form your own opinion about your ideal outcome. Then debate it with a partner or others in your class.

If you could meet Will Dry, what three questions would you ask him?

Why It Pays to Save: Knowing the Time Value of Money