A New Kind of Money: Bitcoin Basics Amidst a Week of Mt. Gox Mayhem

Have you checked into the cryptocoin scene lately? Even if you haven’t, you may have heard talk of the mysterious Mt. Gox, bitcoin and freaked-out investors. Following the news of the first and most widely known bitcoin exchange suddenly going dark, KWHS helps to demystify the world of digital currency.…Read More 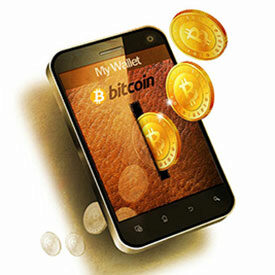 Dylan Redfield, a sophomore at Scotch Plains-Fanwood High School in New Jersey, is crazy about technology. But in Redfield’s case, it’s more than just equipping himself with the latest cool gadgets and clever apps. It’s about raising awareness for one particular kind of technology known as bitcoin, which he believes is as novel as the Internet when it first came along. “People on Reddit [a social news and entertainment website where users post links and text] call me a bitcoin ambassador for people my age,” says Redfield, who is 15. “I’ve been following bitcoin for about a year and half and have made some presentations to my classes that I posted on YouTube and Reddit. [tweetthis alt=”” hashtag=”” url=””]I think that bitcoin has the ability to change the world.”[/tweetthis]

Redfield’s bitcoin education mission always begins in the same place — answering the question: ‘What the heck is it?’ Simply put, bitcoin is money in a digital form that you can use to buy things anywhere in the world and that you can invest in. Add a few more necessary layers to the description and you arrive here: bitcoin is the world’s first decentralized digital cryptographic currency (a.k.a cryptocurrency).

Huh? Well, exactly. Redfield gets that reaction a lot – from both students and adults. In fact, last weekend, on February 22, he traveled to Washington, D.C., for the Junior State of America winter congress, during which he argued on behalf of a mock bill to prevent U.S. regulation of bitcoin. During his presentation to other students, he covered the bitcoin basics: “First, bitcoin is a currency. Just like you can have a dollar, a euro or gold, you can have a bitcoin. It holds a store of value like any other currency. Bitcoin is completely digital and is stored on your computer. It is decentralized and runs on a peer-to-peer network, which means that not one person or [institution] can regulate or control bitcoin. And it uses cryptology [as a security measure] to make sure that only you can use your bitcoins.”

People can choose to pay for things using their bitcoins – sites like Overstock.com and Reddit.com are already accepting this digital currency – and/or they can invest in the bitcoin currency as they would invest in the stock market or in gold, and earn a return on their investment as the price in U.S. dollars per bitcoin rises. In recent months, one bitcoin unit has been worth about $700. It has been as low as $50 and as high as more than $1,200.

Some winter congress attendees no doubt recalled this recent bitcoin primer when big news about the currency flooded the airwaves and headlines this week. Mt Gox, a bitcoin exchange based in Tokyo, Japan, suspended all trading on February 24, and several hours later its website went offline – as in, no data; a blank page. It was revealed that possibly $350 million to $380 million in bitcoin had been stolen from the exchange due to a security breach. This left people who had entrusted Mt. Gox with their bitcoin wondering if their digital currency was forever lost.

Starting to chip away at the Mt. Gox mess requires a look at bitcoin’s online architecture. Andreas Antonopolis, whom many consider to be the authority on everything bitcoin, explained it this week to Stefan Molyneux of Freedomain Radio, like this: “One of the incredible things about bitcoin is that it allows you to exert control and ownership over your funds directly through the use of cryptographic keys, which you can own. And everything happens on a distributed public asset ledger known as the blockchain.” People who placed digital currency with Mt. Gox, however, were not taking ownership over their own funds, but instead choosing to entrust a third party to store and trade their bitcoin. “Users gave Mt. Gox access to their bitcoin [and the cryptographic keys], and Mt. Gox ran custodial accounts just like a bank.”

The sudden disappearance of Mt. Gox, the first and most widely known bitcoin exchange, has raised concerns about the sustainability of the online currency market. The Mt. Gox debacle sent the bitcoin value down more than $100 earlier in the week, causing people invested in the currency to experience heavy losses, if only temporarily. By the end of the week, it was trading around $550 a unit. On Friday, Mt. Gox announced it would file for bankruptcy and admitted openly that 750,000 of its customers’ bitcoins and 100,000 of the company’s own had been lost.

Does this signal an end to bitcoin? While he is not a professional currency analyst, Redfield has his take on the situation. “If you look at bitcoin’s past and what the prices have been, I don’t think this will have a big impact,” he says. “There was a bubble after 2011 when Mt. Gox opened and one after Cyprus crashed [when people worried about the traditional banking system turned to bitcoin technology and drove up the value of the digital currency] and when China [ordered third-party payment providers to stop using bitcoin] last December. Really, all these bubbles go the same way. There’s a large value increase very quickly, then it crashes and stagnates for a few months, and then we have another one of these bubbles. I don’t think this is any different. [tweetthis alt=”” hashtag=”” url=””]Bitcoin is on its natural growth path, and the future will be bright as more people use bitcoin.”[/tweetthis]

Mahir Jethanandani, 16, benefited from a bitcoin bubble. For the past few years, the junior at Saratoga High School in Saratoga, Calif., has become a self-described bitcoin enthusiast, immersing himself in the news and research surrounding this new digital currency. While many people use bitcoin as a payment, he prefers to use it as an investment like a security to hold onto and sell off later. Jethanandani worked in an investment banking internship two summers ago, and began to consider investing in bitcoin. During the digital currency’s financial crisis in 2012, “bitcoin dropped from $266 to $50” a unit, notes Jethanandani. “When there’s such a huge drop, it’s possible to grow an investment like this. I held off on buying any coins until I understood how the system…worked.”

In March 2013, Jethanandani invested in bitcoin through Coinbase, an exchange with low transaction fees. He purchased bitcoin at around $100 a unit and sold his investments eight months later when the news about China was emerging. “I managed to pull out of bitcoin with an obscene investment return,” notes Jethanandani. [tweetthis alt=”” hashtag=”” url=””]“I bought bitcoins at $100 and sold them off at $900.”[/tweetthis]

While Jethanandani no longer holds his investments, he has been watching the Mt. Gox saga with great interest. He welcomes some government intervention. “As soon as this Mt. Gox exchange problem is solved, it’s going to give rise to a new issue, which is regulation of the currency. This regulation, just like what the IRS [Internal Revenue Service] and the SEC [Securities & Exchange Commission] do for the U.S. dollar, needs to be implemented.”

Given the topic of his Junior State of America talk, Redfield clearly disagrees. He argues that government regulation will discourage businesses from investing in establishing bitcoin systems and policies – and therefore hurt bitcoin’s overall adoption as an alternative to traditional currency. He has no plans to stop raising awareness of the technology anytime soon, especially among high school students. “I want people to know that there is much more to bitcoin than meets the eye. It’s not something that investors are using to make a quick buck. It has uses in society…. We hear stories like Target having 40 million credit cards stolen straight from a database. What I find so amazing about bitcoin is that there is no such thing as a database. When you pay with bitcoin, you don’t give them any information. The only thing you give them is your money. They don’t have your email, your credit card number or your name. It’s hard for hackers to get any information from you.”

And what of the market volatility and other concerns raised by bitcoin critics? “Bitcoin has only been around for five years, and since then it has exploded,” Redfield notes. [tweetthis alt=”” hashtag=”” url=””]“Any security will be very volatile in its infancy. As time goes on, volatility decreases.”[/tweetthis]

Whatever the fate of Mt. Gox and its potentially lost bitcoins, such news continues to intrigue even the mainstream business community. This month, The Wall Street Journal launched BitBeat, a feature that follows bitcoin and other cryptocurrencies, including litecoin and dogecoin. It promises to be an important year in digital currency. Stay tuned…

How does the system for bitcoin differ from the traditional banking system?

Should the bitcoin system be regulated? Why or why not?

Do you believe that cryptocurrencies will be more widely adopted in the future? Why or why not?

2 comments on “A New Kind of Money: Bitcoin Basics Amidst a Week of Mt. Gox Mayhem”