Young entrepreneurs are providing innovative products and services around the world. In this, the first of a series of articles on global entrepreneurship that will run periodically, Knowledge@Wharton High school profiles 19-year-old Matías Doublier, co-founder of ElectryAlg, which is creating electrical energy through algae for areas of rural Argentina. …Read More 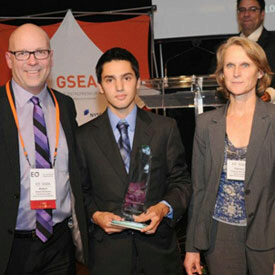 Young entrepreneurs are providing innovative products and services around the world. In this, the first of a series of articles on global entrepreneurship, Knowledge@Wharton High school profiles Matías Doublier, 19 and the co-founder of ElectryAlg, which is creating electrical energy through algae for areas of rural Argentina.

Matías Doublier, 19, has his own company, has won an award for his invention in sustainable energy, and has had discussions with the U.S. ambassador to Argentina. Before completing secondary school, he already knew what he wanted to do with his life — to develop his own business involved in renewable energy, or energy that comes from natural resources such as sunlight and wind.

“Just after I turned 18, I started to work in a nonprofit organization called Emprear,” notes Doublier, now a student of business administration at Austral University in Argentina. “It was a good field in which to learn, and to look for a way to create my own company. Before that, I had finished an administrative apprenticeship in a company, and I realized that I did not want a working relationship in which I was dependent [on someone else’s company].”

Algae Innovation for Communities and Schools

Emprear is a nonprofit organization that, in part, supports entrepreneurship. In Emprear’s factory for ideas and creativity, Doublier got to know Jorge Fossati, an engineer who had arrived at the nonprofit via another project. Both became enthusiastic about the idea of researching algae and its potential for providing electrical energy, so they put together a working team. “We spent all of 2011 on the research,” says Doublier. “We found out that the United States was trying to get 7% of electrical energy from algae. We wondered if we could do the same thing [in Argentina], but on an individual basis. We saw a way to obtain energy for a community of people and for a school. The idea was to help people who had no [electric] lights.” Because of the worldwide energy crisis, 24 out of every 100 people do not have electricity, either because they can’t afford it or because of other factors in their geographical region, according to Doublier.

Doublier and Fossati’s extensive market research resulted in the launch of ElectryAlg, whose goal is “electrical energy through algae.” The company manufactures a bioreactor that, through the use of biomass (algae), generates electricity for use in homes, schools and small factories. “The unique factor is that the energy is 100% renewable and green,” says Doublier.

In Argentina, algae can be cultivated in swamps, streams or in large basins with water. “After that, they process the algae to obtain oil, and that oil goes into the motor [of the bioreactor]. We also have an opportunity to use laboratory algae. The plants [in the lab] double in size every 72 hours, so you can begin to produce electricity in just a few days,” notes Doublier.

One of the advantages of the prototype invented by ElectryAlg is its low cost in comparison with other alternative energy sources. “Our equipment can cost between $30,000 and $80,000, depending on where it needs to be installed. It costs at least $100,000 to create energy with solar panels and much more [than that] for wind power,” he says.

Energy from algae is also more renewable because it does not use lithium batteries, as do solar and wind power. “The only thing about our bioreactor that creates pollution is the combustion of the motor, but the algae consume carbon dioxide, which reduces the harm done to the environment,” Doublier notes.

Last year, Doublier’s project was introduced at the competition for the Global Student Entrepreneur Awards in the United States. These awards are given to high school and college students who have developed successful businesses. To the surprise of everyone, Doublier – the first Argentine to participate in the competition – won first prize in the category of “Best Social Enterprise” as a result of his goal to help rural communities that don’t have electric lights.

“Some 150,000 people participated, but only 33 were chosen,” notes Doublier. “We were not expecting the prize because other companies were enormous, and they operated on an entirely different level. But this [project] opened a lot of doors for us, and it energized us even more.”

Even after their prize-winning company was up and running, the founders of ElectryAlg faced a major difficulty: “We realized that customers could not buy our product because it was largely targeted at people who didn’t have a great deal of money. We had to seek out governments and foundations in order to make it viable [as a business]. So we began to contact service organizations, municipal governments and medical centers — especially in the north of the country — about acquiring our solution,” notes Doublier.

A foundation hired ElectryAlg to bring electricity to the aboriginal Toba people in the Chaco province of Argentina, in “El Impenetrable,” or The Impenetrable Zone. The region is characterized by wild, thick vegetation, and it is hard to reach and travel across. “We sold the entire solution from the algae to the [bioreactor] device. In this case, with a single motor we were able to generate electric lighting for a group of 50 people. They will also be able to power a refrigerator, freezer and even computers,” says Doublier. He expects to provide his services to hospitals and schools, especially in such northern Argentine provinces as Formosa, Misiones, Corrientes and Santiago del Estero, where there is a great need for energy.

“According to a study made last year, there are 2,500 schools in our country and 100 health clinics that still do not have [electric] light. There are schools that the government sent laptops to, but they don’t have light,” states Doublier. “That sort of thing also happens when a foundation donates a device to a medical clinic that doesn’t have any electricity. This is contradictory. The government has to take charge, but we can’t wait until they do that. There are companies that are worried about this, and can do something for their localities and the places where they work.” ElectryAlg is developing prototypes in its factory and it is looking for new employees to expand its production capacity.

On March 28, Doublier met with Vilma Martinez, the U.S. Ambassador to Argentina, because “she called me and said that she was impressed by my project.” During his visit to the U.S. Embassy, Doublier also met with Mark Cullinane, an American advisor for environment, science and technology, and Ryan Janda, an official in the economics section of the U.S. Embassy. They promised to help Doublier “get in contact with a private-sector company that could be interested in our work,” he says.

What is renewable energy?

What has been one of ElectryAlg’s most significant challenges and how did the company address it?

What is a social enterprise and how does ElectryAlg fit into that category?

Are you working with renewable energy? Post your comments to the story and on our Facebook page at http://www.facebook.com/whartonhs.