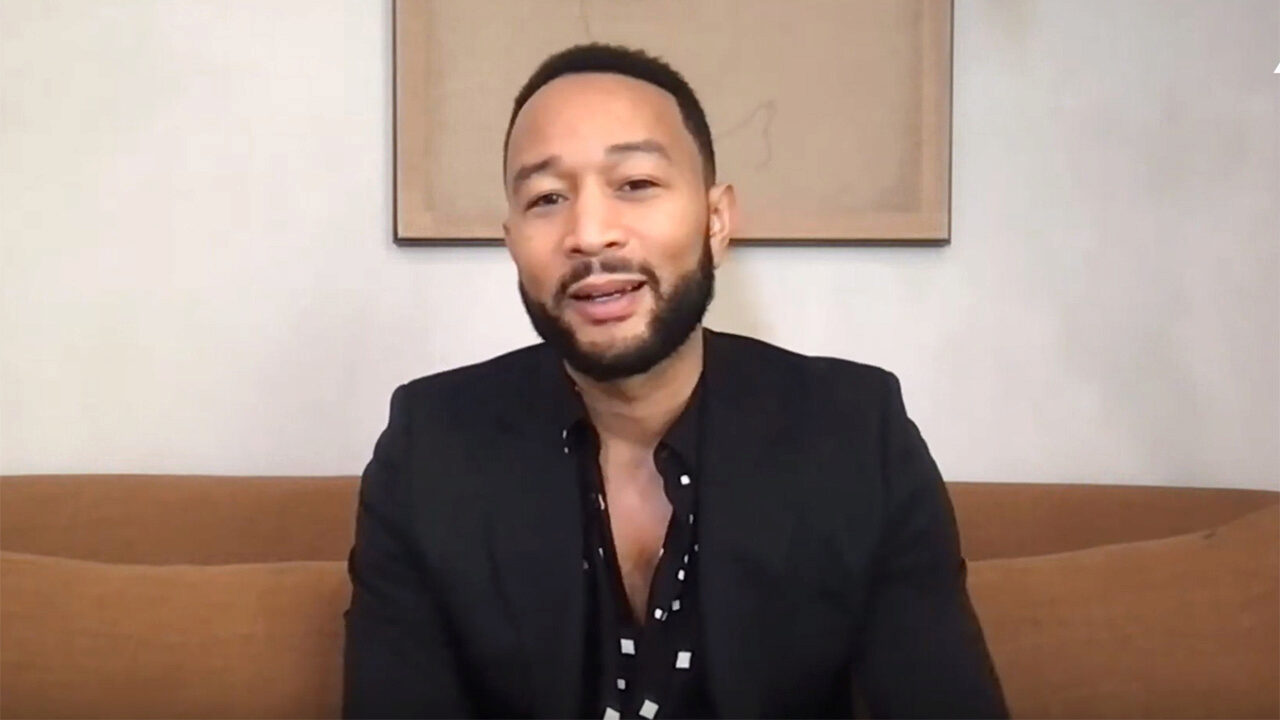 When John Legend joined a virtual Wharton Venture Lab celebration this month to accept his Penn Wharton Entrepreneurship 2021 Alumni Achievement Award, he shared a story about when he was a teenager growing up in Springfield, Ohio. When he was 15, he entered a Black History Month essay contest sponsored by McDonald’s in which he answered the question: How do you plan to make Black history?

“My answer in 500 words or less was that I was going to make it in the music business, become a successful artist and use my platform to fight for justice and equality for my people,” recalled Legend during his conversation on March 3 with Wharton Dean Erika James. “I was so interested to read about civil rights heroes, people who fought for justice and fought for equality. It always struck me that they lived really impactful lives and I wanted to live an impactful life. I wrote that [essay] when I was 15 and had forgotten about it. When I was embarking on my career, my dad reminded me of it, and when I reread it I was almost in tears because it was so prescient saying exactly what I ended up doing in my life.”

While many know Legend as a celebrity singer, songwriter, record producer and more, fewer know his passion for social causes, especially criminal-justice reform and education. His accelerator Unlocked Futures, for example, supports entrepreneurship as a pathway for people who have been affected by the criminal justice system to earn an income and build a career.

For these endeavors, as well as his own personal entrepreneurship journey that led him to build a multi-platinum music career, and start businesses like Get Lifted Film Company and LVE Wines, Legend, a 1999 University of Pennsylvania grad, won this year’s Penn Wharton Entrepreneurship Alumni Achievement Award.

“It’s hard to make it as an artist without entrepreneurial spirit,” said Legend. “So much of what you’re doing is presenting yourself as a new business and a new idea and a new entry in a crowded field of musicians. You’ve got to find a way to convince funders (record labels, usually), and your customers that you’re a new company worth investing in and buying products from. My first big entrepreneurial move was to decide to embark on this career as an artist…and get my music out in the world.”

“How do I show love for people that I don’t even know?” — John Legend, Entrepreneur

Entrepreneurship, and the characteristics that define this business mindset, have continued to guide Legend’s path forward since college when, even as an English major, he was “very influenced by my Wharton undergrad friends.”

Threads of inspiration woven throughout his experiences reflect one or all of the following principles:

Humanity. Connecting with the people you hope to serve and understanding them deeply can take your entrepreneurial pursuits to a new level, which has helped Legend in his work with people leaving prison. “Dr. Cornel West [political activist] said that justice is what love looks like in public,” noted Legend. “I think what he meant is that if you love people that you don’t even know — people who may not look like you, may not worship like you, may live across the country or across the world — it shows itself in policy, in justice and equality. I use that as a guiding force for how I think about my activism…How do I show love for people that I don’t even know? How do I show love for people who may be overlooked? Who may be under-resourced? Who may be oppressed or who may be outcast because they look differently or love differently or worship differently?”

Collaboration. Part of differentiating yourself “is collaborating with the right people to do it together and learn from each other to create something new you wouldn’t have done by yourself,” said Legend. “I learned from my own journey…It took a lot of time and collaboration, working with people who inspired me and pushed me and challenged me.”

Persistence. “So much of what is going to happen at the beginning of any kind of entrepreneurial venture is you being told no; you being told you’re not ready yet, being told to wait. You’re probably like: ‘What do they know!…I know I have something great to offer.’ I was thinking that as a musician. I’m ready! What do these labels not see in me that they should be seeing? You have to take that feedback, learn from it, grow from it and be persistent,” advised Legend. “Have grit, have determination, have that perseverance and resilience to get through all those no’s until it’s time for your yes to come. A lot of times their feedback can let you hone [your idea] and shape it and mold it in the way it needs to be molded until it’s really ready for prime time. Even though I wouldn’t have admitted it to myself at the time, I can in hindsight say that a lot of the feedback and constructive criticism that I got back then really helped me become a better artist.”

Did you ever enter a public essay contest like the one John Legend recalls? What did you write about? Did it help you focus in on what you have to offer the world?

Why do you think John Legend focuses on humanity as an important awareness in his own business journey?

Constructive criticism almost always improves our ideas, products, services and contributions, and yet, we can resist people telling us that we have more to learn. Describe an experience where you embraced the value of feedback in your own life — or rejected it. What was the outcome?