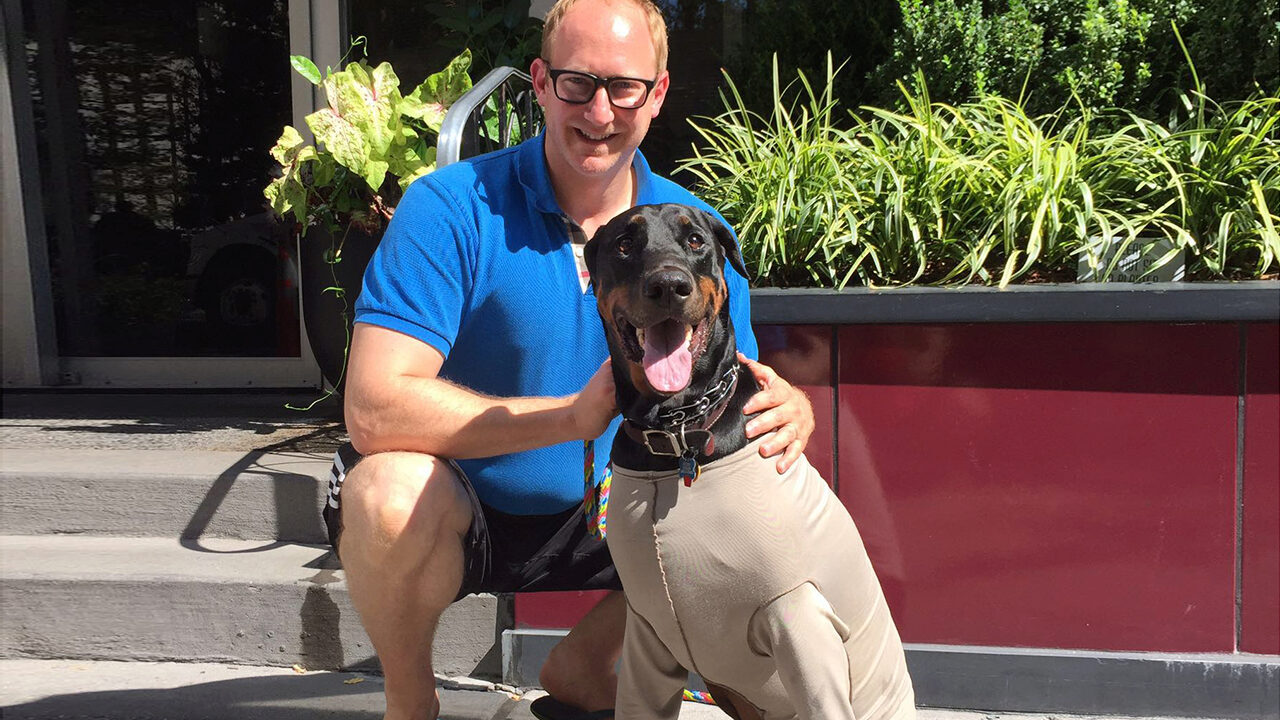 Benjamin Lewis once ignited his competitive spirit on the open water as captain of the 2004 Olympic K4 team, the four-person men’s sprint kayak. He also trained competitively for cross-country skiing. These days, he is channeling that passion into quite different, yet vital areas: animals and research. As founder of The One Health Company in Philadelphia, Lewis – along with a team of researchers, vets and scientists — has developed humane clinical trials in animals that lead to the advancement of important pharmaceuticals to treat illnesses in people. And he is keeping those animal research subjects alive and wagging.

An edited transcript of the conversation appears below.

Knowledge@Wharton High School: Benjamin Lewis is founder and chief operating officer of The One Health Company, an innovative and humane animal testing business based in Philadelphia. The One Health Company is an active member of Wharton’s venture initiation program (VIP), an incubator program that helps University of Pennsylvania students as they grow their businesses. Ben has studied veterinary medicine at U of Penn and health care management at Wharton. Ben, thank you for joining us today.

Benjamin Lewis: Thank you for having me.

KWHS: Tell us about your startup. What is The One Health Company? Help us understand how it is unique in the marketplace.

Lewis: The One Health Company is a social impact company that’s revolutionizing animal testing. [The Food and Drug Administration (FDA) requires all human pharmaceuticals, medical devices and diagnostics to be tested on animals prior to human trials]. Animal testing is a pretty taboo industry that hasn’t seen much innovation in the last 100 years. The current method of animal testing is to take a healthy animal, give it a disease, test on it, and then kill it at the end. And sadly, we kill about 100 million animals using this traditional method. That being said, while I was at veterinary school I realized that there’s no shortage of naturally sick animals that come to see us every single day at the veterinary hospital. I [thought], why are we creating disease when we have so much naturally existing disease in the pet population?

The One Health Company operates clinical trials in animals the same way you operate clinical trials in people. You would never give a person a disease just to test on them. And likewise, we find naturally sick animals and enroll them into clinical trials. The animals stay at home with their owners the entire time, they receive cutting-edge treatment at the world’s best veterinary hospitals and we pay for everything. This is very beneficial for the pet because they’re receiving some really cutting-edge therapy. It’s beneficial for the owner because we pick up the bill for everything.

We never use a placebo arm, which means the pets will always receive either the gold standard of care or the experimental therapy. And in the end, we accelerate the pace of innovation for pharmaceuticals and new biologics coming to market.

At the end of the day, we have tremendous financial savings for the pharmaceutical industry, as well. We’re really unique because we’ve taken something that is almost inherently inhumane, animal testing, and made it so that everybody benefits and we actually heal the sick patients in our trials.

KWHS: [Your company] has researchers and scientists, a lot of different roles. You all describe yourselves as animal lovers. Can you talk a little bit about the passion that has helped motivate you to start your business? Also, do you have some interesting stories about the animals?

Lewis: Absolutely. The whole reason we started the company is because we love animals. For example, our chief medical officer is an MD, PhD from UCSF (University of California San Francisco) and most recently Penn Medical School. She joined the company because she knew there was a better way. She felt bad inducing disease in these laboratory animals, especially when she saw that results didn’t correlate with human success. So when she learned about the company, she was very excited. Love of animals is the heart of the company. And actually making the world a better place is one of our core missions.

Essentially, one of the prerequisites to join any part of our interview process is, would you classify yourself as an animal lover and how many pets do you have? Personally, I have four pets. I have a rescue Chihuahua, a rescue poodle, a poodle my parents bought, and a three-legged Doberman that I got when he had four legs. Unfortunately, he developed osteosarcoma. He participated in a clinical trial. And remarkably three-and-a-half years later, he’s still alive. This disease only has about a three-month life expectancy. This is a personal example of mixing business and personal life. The passion and empathy for seeing sick animals and trying to make them better is definitely a core theme of our company.

KWHS: You have a really interesting background — your first career. I’d love you to tell us a little bit about that and how you decided to get into this line of work.

Lewis: Prior to Wharton and veterinary school, I was a professional athlete. I was on the 2004 U.S. Olympic team and I was captain of the K4, the four-person men’s kayak in Athens, Greece. That was a tremendous honor. I started training when I was 13 years old. I trained for eight years, and I had the honor of representing the United States when I was 21. Unfortunately, shortly after the Olympics, I was training and playing soccer and I shattered my right ankle and spent a little over a year in a wheelchair following four ankle surgeries, a hip surgery and a knee surgery to kind of put me back together again. At that time I returned to school, studied bioengineering, graduated, and then the same passion that I put into training for sport, I put into studying and academia.

KWHS: Did some of the skills that you had as a professional athlete and as an Olympian carry over into the business world?

Lewis: Absolutely. This might be a misconception, but most Olympians play their sport because they love [it]. If you asked me today if I could go out and do anything [and] didn’t have to worry about money, no other responsibilities, I’d say I’d love to go out kayaking. I think most Olympians [feel] the same [way]. And that same passion for going out and paddling is the same passion [I have for my company]. I love animals and I love saving animals. It’s that same kind of driver of really liking what I’m doing that has been the key to success. I don’t see it as a job. I really do see this as something I enjoy doing.

KWHS: What’s next for The One Health Company? Where do you stand in your process of development, and where do you see the company in five years?

Lewis: Right now, The One Health Company operates out of about 35 specialty animal hospitals across the United States. Because what we’re doing is so new and so disruptive, the FDA hasn’t quite embraced it as a standard methodology. It’s still an alternative supplementary methodology for proving safety and efficacy, which is necessary to proceed in human testing. In the next five years, I’d love to see that change so that what we’re doing becomes a mainstream methodology and is adopted by more companies. We can save a lot more pets and we can minimize animal usage in laboratories.

KWHS: Have you raised a certain amount of money for the venture at this point?

Lewis: Thankfully, what we have raised is seed round [of financing to scale up our operations]. Until now, we’ve been self-financed. We have some incredible investors, [and I would like to thank them for their generous support]: Ben Franklin Technology Partners of Southeastern Pennsylvania; Matthew Frank, the godfather of the natural disease comparative disease model methodology; The Science Center’s Digital Health Accelerator; Wharton, through the [VIP], Woods Award and the Snyder Seed Award; and lastly, Bioadvance, [one of the best health care venture capital funds in the area, is our lead investor].

KWHS: You’ve had so much experience at this point as an entrepreneur, as an athlete, as a scientist, and you have a lot of different skills and talents. What advice might you give to high school students? What are some of the things that you feel have been your most valuable life lessons thus far that you would like to pass along to them?

Lewis: I have two life lessons. I was 12, 13-years-old when I started training for kayaking. I’m from Florida, and everyone was playing baseball or basketball or football. They said, “Ben, why are you kayaking? That’s not a real sport. Where are you going to go with kayaking?” Eight years later, I was on the Olympic team. Playing recreational football didn’t get them too far. Even if what you do sounds crazy to others, you certainly should not stop doing it, especially if it’s a passion of yours.

The next thing is, just go and do it. Don’t think. Planning is obviously very important. But some people get lost in the planning process and forget to execute. If you have a brilliant idea, there are many cheap and easy ways to test if your idea works. There’s a great start-up movement called “Lean Startup,” and if any high school kids are interested in starting a company of their own, I highly recommend going out and learning about the “Lean Startup” methodology.

Benjamin Lewis says, “Because what we’re doing is so new and so disruptive, the FDA hasn’t quite embraced it as a standard methodology. It’s still an alternative supplementary methodology for proving safety and efficacy.” Sometimes, even if new ideas present better ways of doing things, they take a while to become mainstream. Why do you think that is? What is preventing The One Health Company’s approach from becoming the accepted method in clinical trials?

The current practice of making animals sick, testing on them and then killing them seems unethical. But is it? How do you feel about the tradeoffs inherent in proving the safety and efficacy of drugs? Have a discussion around the benefits and disadvantages of this type of approach, which has long been the industry standard.

Entrepreneurs come in all shapes and sizes. How is Benjamin Lewis’s entrepreneurship journey unique, particularly when it comes to a combination of education, passion and the business buzzword, disruption? Refer to the “Related Links” tab if you need help understanding disruption.

Lewis describes The One Health Company as a social impact business. How is it impacting both business and society?