Baseball’s Bottom Line: The Money Behind the Game

So far, the 2011 major league baseball season has not been kind to the New York Mets, who are in last place in the National League East. The team’s struggles may have more to do with what’s going on behind the baseball diamond – namely some serious financial trouble that required a $25 million loan to keep the team in business. While this emergency fund from the organization that oversees professional baseball is not typical, it does lead to questions about how teams get the money to operate – and possibly even to stay afloat. …Read More 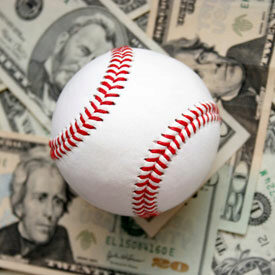 If you are like most avid baseball fans, you can’t get enough stats: RBIs, batting averages, home runs. So when the sports page headlines start spewing very different kinds of numbers related to cash shortfalls, short-term liquidity issues and debt, it can throw even the most passive fan into a tailspin. My favorite team is in a cash crisis? I just want them to play ball!

Two teams have seen high-profile financial troubles lately. The New York Mets, who lost half a billion dollars to a financial scheme run by Bernard Madoff, the former investment advisor who defrauded investors out of billions of dollars, recently got an emergency $25 million loan from Major League Baseball (MLB) — the organization that oversees professional baseball in the U.S. and Canada — to keep the lights on at Citi Field. The Los Angeles Dodgers, after several years of bad financial management due to the divorce of their owners, was forced to turn over its business operations to an outsider and the team may soon be sold.

Steps like these are taken with struggling teams, but they are pretty rare, says Wayne McDonnell, a professor of sports management at New York University. Baseball Commissioner Bud Selig’s decision to give $25 million to the Mets is especially extraordinary. “MLB can help and they will help when necessary,” says McDonnell. “But MLB isn’t a bank — it isn’t allowing teams to borrow money just at any time.”

So how does a baseball team operate financially? Each baseball team has to develop its own business model for making money. Like all businesses, some teams do it very well and make a lot of cash. Others don’t and run into trouble. According to the Forbes Valuation of the 30 Clubs in Major League Baseball, revenue in 2010 ranged from the Florida Marlins generating $143 million to the New York Yankees making $427 million.

Making money in baseball is about more than selling tickets and hot dogs, however. The size of the market in which teams play also influences the bottom line. Even so, smaller teams with fewer fans can be in overall good financial shape because of several ways money comes in from MLB on a regular basis. One way is an MLB-sponsored line of credit. The biggest system is called revenue sharing. Under this plan, all 30 MLB teams put a certain percentage of their net revenues into a pool. That pool is then split evenly between the teams. Teams in smaller media markets, like the Pittsburgh Pirates and Kansas City Royals, get more money than they put in, while larger teams, like the New York Yankees, end up losing money on the deal.

Without revenue sharing, which isn’t a loan but a routine part of the business, smaller teams couldn’t compete and may have trouble making a profit. “They need the revenue sharing. They get a very healthy check from MLB’s revenue-sharing program,” McDonnell says. Teams can use the money however they want, he adds. “[MLB] basically says we’re going to give you a check, so do something with it.” While revenue sharing figures aren’t commonly distributed, The Wall Street Journal reported that in 2005 the revenue sharing payees topped out with the Tampa Bay Devil Rays (now known as the Tampa Bay Rays), which received $33 million, while the Yankees paid in $76 million.

When baseball teams suffer financial setbacks, MLB will step in. But it has to be a big problem, and there are no rules for when the league has to help. In the Mets’ case, the team’s owner has been around a long time and has a good reputation, easing the way for the $25 million emergency loan. Still, Commissioner Selig has come under fire for his decision to intervene.

A High School for the Business of Sports

How teams get their money may not seem to matter much to what happens on the field, but it does to Matthew Wiener, a high school sophomore living in New York City.

Wiener likes to know how a team’s performance on the field can be affected by business decisions made behind the scenes. He got interested in the business of baseball and ended up liking it so much that he started a related blog, “That’s the Bottom Line.” Wiener also attends the Business of Sports School, a high school that exposes students to behind-the-scenes jobs in sports-related fields and emphasizes entrepreneurship and business skills.

Wiener is interested in sports journalism and broadcasting and may want to become a sports agent or team general manager.  “I want to read about the business side of everything because it affects the on-field product,” he notes. “There’s a connection between what the management does and the team’s play. If I’m going to complain about [how my favorite team plays], I might as well know what’s behind it.”

These days, Wiener has plenty to bellyache about. His favorite baseball team happens to be the Mets, which has a lot going on behind the baseball diamond – and is currently in last place in its division. Wiener can only hope that the team’s financial woes don’t continue to hurt its on-field performance.

One comment on “Baseball’s Bottom Line: The Money Behind the Game”