While the Internet has long been called the World Wide Web, its power as a tool to connect and provide services has taken time to develop in certain regions. In the past few years, young digital entrepreneur Loulou Khazen Baz has been growing Nabbesh.com, the Arab world’s first online employment marketplace. After winning "The Entrepreneur" in 2012, a reality TV show in the United Arab Emirates, Khazen Baz combined her prize money and her savings to launch a service that she feels is both a viable business and a much-needed social enterprise. …Read More 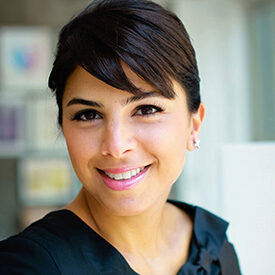 The Internet has empowered many Arab women entrepreneurs to transcend educational and other conventional barriers — they are recruiting, developing products, communicating across global markets, fundraising and delivering new services in growing numbers.

In a region where talent faces significant barriers — travel constraints, safety issues, social limitations and a dearth of job opportunities — Nabbesh allows companies to micro-source jobs from across the Middle East and North Africa region. The drivers of Nabbesh’s business are similar to those of firms like elance.com and guru.com, which deliver the same type of services in the U.S.: The opportunity to source expertise flexibly, affordably and especially around projects that need point-in-time work with little face-to-face contact. Add to that factors such as the region’s high unemployment rates and political issues that cause severe economic distress, and Nabbesh.com could be viewed as serving a social and humanitarian purpose as well.

Khazen Baz launched Nabbesh in 2012 through a combination of strategic capability, vision and some serendipity. Her presentation of the concept behind Nabbesh won her 1 million dirhams (around US$272,000) in the inaugural season of the reality TV show, The Entrepreneur. That “lucky break” plus her savings from over a decade got her started.

That year, Khazen Baz had just left ActiveM, a VC firm where she mentored and helped launch a series of start-ups. Like many of her entrepreneurial peers, she had held a series of corporate roles that benefitted her growth, but left her feeling like there was more to a career than a slow climb up the corporate ladder.

Khazen Baz’s strong aspirations are rooted in her childhood and education. Since her early years in Broumanna, Lebanon, she has been a driven activist of sorts. While she herself doesn’t remember specific incidents, her mother insists that she never eased up on her assertion that she had a right to equality with her two brothers. It may have helped that they were 10 and 11 years older than her, respectively; as the baby of the family, she ended up having more freedom than many of her classmates and friends. However, she remembers being angered by the differentiation in treatment that she perceived around her. “It’s almost as if less [was] expected of us [girls],” she says.

Completing her bachelor’s degree in hospitality in Australia proved a truly transformative experience. She remembers being in awe of a university system where people talked to professors like they were almost peers – talking about things on a first-name basis.

Returning home, though, Khazen Baz found that opportunities were scarce. This drove her decision to move to Dubai in 2003 — a common choice among women entrepreneurs — where she started as a project manager at DaimlerChrysler Financial Services. A few years later, she moved over to a real estate firm, where she sharpened her management skills. “From simple approvals to complicated implementation strategy, she always found a way to juggle her company’s best interest and ours at the same time,” notes one of the contractors who worked with her while she was at Dubai Properties. “Loulou has a natural energy that is translated into every little e-mail and every long conversation, given she is excited and believes in what she is working on. Once you see her in action during the early stages of a brand launch or the last-second stage of a campaign launch, you’ll be surprised at the kind of pressure she can take, and she manages to do so with a smile.”

The Dubai ecosystem, with a common set of experiences and social venues that draw young professionals, helped Khazen Baz build a strong network. She continued to develop that network when she transitioned to working with founding partner Salam Saadeh in creating ActiveM, which offers management, financial advisory and consultancy services to early-stage companies and small to medium-size enterprises. While there, Khazen Baz was introduced to entrepreneurship firsthand. She also became excited about the prospect of building an organization that would have real social impact.

Khazen Baz’s own experiences had shown her that there were few opportunities for talented young people in many Middle Eastern and North African countries, and she became convinced that she needed to address the gaps in the employment marketplace. Social and political unrest had blighted businesses, and certainly limited the number of high-tech companies that could employ the young people who often graduated with technical degrees from regional and international graduate schools. In addition, the needs for technical skills in established businesses were variable, since the general level of tech adoption was slower, and companies did not generally build out large internal teams. This made it possible for Khazen Baz to start crafting a series of corporate partnerships that would be natural clients for the talent represented on Nabbesh.

Given the status quo — a market that had never seen such a platform, and where the “single employer” model of people staying with one company from their first post-college hire to retirement was common — Nabbesh’s success is striking. The site currently has 61,523 members, and 8,176 freelance jobs posted. Historically, more than 40% of the jobs posted and filled on the site have been creative or design-oriented commissions. Business services and administrative support come in second at 23%. Its early successes were around translation gigs, as well as specific technical skills sets, such as programming for mobile platforms.

Among the site’s users, more than 62% are undergrads, 22% are graduates or some 85% have tertiary education. Khazen Baz isn’t surprised by this. “The opportunity is massive,” she says. “It’s a market of more than 20 million people across just five key markets — UAE at the forefront, followed by Saudi Arabia, which is the largest e-commerce player, followed by Egypt, Lebanon and Jordan.” Yet, Khazen Baz doesn’t plan to limit her options: In the future, Nabbesh.com may expand beyond the region.

According to Khazen Baz, success for Nabbesh also depends on an understanding of the Arab world’s complexities. The Gulf Cooperation Council (GCC), which comprises Bahrain, Kuwait, Oman, Qatar, Saudi Arabia and the UAE, is distinct from North Africa (Egypt, Tunisia, Algeria, and so on.) and the Levant (Syria, Lebanon and Jordan). Each hosts different types of skills and business partners. Khazen Baz’s experience across multiple geographies has been an asset in building her enterprise.

Framing the potential of her start-up beyond the borders of the GCC was part of the success story — conventionally, businesses see themselves within the framework of the five countries, but in reality, the region’s online platforms can, and should, target all 22 nations of the Arab world, since they have common characteristics that can be leveraged: language and social mores, for example. This expands the potential reach of such platforms to more than 400 million people.

One challenge that Arab women entrepreneurs often have is hiring technical talent. However, Khazen Baz has benefited from having a wide network, especially given her previous role at ActiveM. She now runs a 30-person team, and is looking forward to expanding.

A more significant hurdle, she says, is limited access to capital. The investment community in the Arab world is relatively immature when it comes to understanding and valuing digital and online business concepts and platforms. Additionally, more traditional real estate and infrastructure investments involve ingrained expectations and metrics that don’t translate well into the more agile, pivot-oriented world of online businesses, where communities and click-through rates are the most tangible markers of success. This has given rise to a series of interesting VC firms and incubators, but many are seen to be taking larger equity stakes for their investment and support than their Western counterparts. “They’re certainly getting their pound of flesh,” Khazen Baz notes.

Nabbesh’s market is in part defined as “a revolution in how companies are using the Internet: not just to buy stuff or look up information but to match specific tasks that need doing with human beings able to do them.” Read the CNN Money link below to better understand this market. How established of a market is it in the U.S.? Why does it represent a “revolution?” How is Nabbesh adapting this market to the needs of the Arab world?

Where is Dubai? Why are young professionals like Loulou Khazen Baz flocking there? Research Dubai online and find out some of its strengths and its unique qualities. For instance, did you know that kissing and dancing in public are illegal?

Opportunity for digital development also comes with hurdles. What are some of the hurdles that Nabbesh.com faces?

You Must Be Joking? From Physics at Harvard to Comedy Writing for The Simpsons