It is high school graduation time in India, and 12th graders are starting down pathways toward their careers. Five high school students from India share their plans for life after high school – from biotech to international law. …Read More 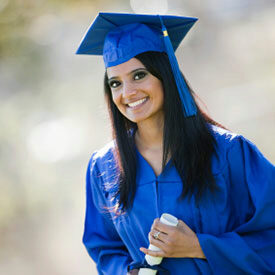 It is high school graduation time in India, and 12th graders are starting down pathways toward their careers. Five students in the Indian cities of Mumbai, Chennai and Bangalore share their next steps – and a few dreams — with Knowledge@Wharton High School.

Chennai-based Anvita Singaraju, 17, wants to pursue a career in biotechnology and may specialize in cell technology — which includes working at the cellular level to develop new types of disease treatments — and in genetic engineering, which involves technologies used to change the genetic make up of cells. She plans to earn a bachelor’s degree in that subject at a Chennai college and later travel abroad to get her master’s degree. She became interested in biotech when she chose that as an optional subject two years ago at her school, Vidya Mandir, in Chennai. “There is so much scope for biotechnology in our world, considering global warming and the use of chemicals,” she says. “Modernization and urbanization are killing nature.”

Biotechnology solutions such as gene coding and recombinant DNA technology could help crops adapt and survive in adverse conditions, Singaraju notes. She understands those solutions are still in nascent stages, but that is where she sees potential. Yet, she knows biotechnology cannot provide solutions for all the other problems she sees around her. “It comes [down to] educating people about basics like sanitation and hygiene,” she says.

Ganesh Ananthakrishnan of Mumbai wants to become an electrical engineer. The 18-year-old plans to attend the Indian Institutes of Technology (IIT), which have produced entrepreneurs like N.R. Narayana Murthy, founder of Indian IT services firm Infosys, and Silicon Valley venture capitalist Kanwal Rekhi. “I want to be like [Apple’s] Steve Jobs – an innovator,” says Ananthakrishnan, though he is not yet sure of his innovation path. “He [Jobs] dropped out of college and later decided what he wanted to do.” Ananthakrishnan feels that in the U.S. and Western Europe, students have more academic choices than he has in India.

As he awaits acceptance into IIT, Ananthakrishnan is putting pen to paper as he works on his other passion, writing a suspense thriller novel.

Sanjana Panchnath, 17, has enrolled in M.O.P. Vaishnav College for Women in Chennai to earn a four-year degree in electronic media (think video and audio recordings, multimedia presentations and the Internet). She initially wanted to become a veterinary scientist, but abandoned that dream after friends and family warned her of the math course load. While she loves animals – her family recently adopted a golden retriever named Toby — she is not a fan of math. She also doesn’t see herself joining the family business, which manufactures medical diagnostic equipment.

Outside the classroom, Panchnath is an athlete and a sprinter, drawing inspiration from Olympian sprinter Usain Bolt.

Pratham Goel, 18, wants to earn a degree in computer engineering, ideally software. While he sees himself working for a big company, he also hopes to someday go out on his own as an entrepreneur. He will begin with a job, gain experience and only later launch his own business. He wants to write programs for operating systems.

Goel is not inclined to join his parents’ business in retailing handcrafted gift items. “Somehow I don’t connect with that,” he says. He says that he prefers to develop skills related to technology rather than to artistic design.

Chirag Prince of Bangalore plans to pursue a law degree and make a career in corporate law and possibly international law. He began to consider this direction when friends and family praised his debating and speaking skills at school.

Prince, 18, knows that law is a demanding profession, but believes that he is well suited for it. “I am not a short-tempered person; I can speak to people and sort out problems,” he says. “I think of myself as a good leader. I’ve been told I am a people person and a good conversationalist.”

After hours, Prince can be found both listening to and playing music. He likes The Beatles and classic heavy metal bands like Judas Priest and Black Sabbath. He plays the saxophone, clarinet and trumpet, and has been in his school band for many years. One dream that he is putting off for later is to become a theater actor – but not a movie actor, he adds. You won’t see him in Bollywood anytime soon.

Is it important to know what you like and what you don’t like when choosing a career path? Why or why not? Use examples from the Indian student profiles.

Do any of the career paths mentioned in this article appeal to you as well? Which ones? Why?

Describe several ways that you might explore a career that interests you before you decide to pursue it. Have you already done career exploration? What was it like?

6 comments on “Grads in India: What’s Next?”