As the nation’s largest employer with nearly 2 million civilian employees, the U.S. federal government’s greatest asset is that its jobs offer a match for just about every skill set and interest. The government is boring, you say? Think again.…Read More 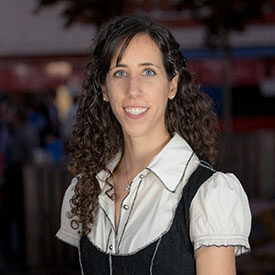 Growing up, Lynnie Martin was always finding ways to be creative and organized. When it came time for her to explore career options, it made sense to look for opportunities that involved the activities that she enjoyed. This process led her to an internship — in of all places – the U.S. government, and eventually her dream job with the Department of Homeland Security.

“Coming from Reno, Nev., worlds away from Washington, D.C., I wasn’t sure what to expect when I joined the government five years ago,” notes Martin, who graduated from Galena High School in Reno, earned a double major in English and Spanish at the University of Nevada, Reno and just completed her MBA at the University of Maryland. “I have built a broad set of skills in different fields, including business, program management and training,” says Martin, who works as a training specialist for Homeland Security. “I also have the opportunity to design programs, write articles and assist in creating developmental plans.”

As the nation’s largest employer with nearly 2 million civilian employees, the U.S. federal government’s greatest asset is that its jobs offer a match for just about every skill set and interest – “from astronomy to zoology and everything in between,” says Tim McManus, vice president of education and outreach for the Partnership for Public Service, a nonprofit group that advocates for government employment.

A Place to Innovate

According to a Deloitte Millennial 2014 survey, 78% of millennials (Generation Y, typically born between 1977 and 1998) are influenced in their career selection and job search by how well a company embraces innovation. “Technology and innovation are a part of our everyday lives, and I think that many of us would like careers that echo this aspect,” says Martin, who is 27. “Unfortunately, I think most teens tend to think the government is outdated and boring, which couldn’t be further from the truth.”

Government workers are leading and innovating on issues such as developing vaccines for deadly diseases, fighting sexual and racial discrimination, protecting food and drug supplies, foiling terrorist attacks, caring for wounded veterans, harnessing atomic energy and making sure the elderly and those with disabilities get their Medicare and Social Security benefits. Those who are not on the front lines are supporting these efforts in a variety of ways. More than 50 current or former federal employees have received Nobel Prizes. “We are at the forefront of international issues that you hear about on the news,” says Michael Wolfe, chief of student programs and fellowships for the U.S. Department of State. “We come up with solutions to tough problems and help make the world a better place.”

At the White House, employees are encouraged to participate in the SAVE (Securing Americans Value and Efficiency) award, an annual contest designed to tap into ideas to make government more effective and efficient. “Similar programs occur in many different agencies, and I think they provide a way for government employees to truly be creative and engaged in their work and in their country,” Martin says.

By 2015, the Office of Personnel Management projects that more than 550,000 federal employees, one third of the entire full-time permanent workforce, will leave the government due to retirement. Last year, approximately 90,000 jobs were filled, the majority of which were entry-level. While not all entry-level positions require a bachelor’s degree, young people with STEM (Science, Technology, Engineering, Mathematics) backgrounds are in great demand, McManus says. “A common misconception is that to work for the federal government, you have to work in D.C.,” he adds. However, 84% of federal jobs are filled in regional offices located throughout the country. Plus, more than 50,000 federal government employees, such as Foreign Service officers and specialists, work abroad, he says. The U.S. Foreign Service carries out the foreign policy of the U.S. and helps U.S. citizens abroad.

As part of its effort to recruit more diversity into the U.S. Foreign Service, the State Department established the Thomas R. Pickering & Charles B. Rangel Fellowship programs. These programs provide funding towards a student’s graduate degree and in return, the student commits to join the Department’s Foreign Service for a minimum of five years.

So, with all the great benefits and revitalization taking place across government agencies, why did the 2013 Best Places to Work data released by the Partnership for Public Service and Deloitte reflect that government employees are increasingly dissatisfied with their jobs and workplaces? “Federal employees are feeling less satisfied, but this stems more from government shutdowns, salary freezes and budget cuts, things that make it hard for employees to do their jobs,” notes McManus. “They still feel they have challenging, meaningful work.”

The No. 1 benefit that attracts young people to the government and keeps them there is the chance to make a difference, says Wolfe. Simply put, a federal job allows you to contribute to causes greater than yourself, making it a uniquely rewarding professional experience. “Every job, in its essence, is intended to help our country and our world in some way,” adds Wolfe.

While government jobs have their advantages, McManus urges young job seekers to recognize that movies and television tend to paint a much more dramatic and less-than-realistic image of agencies like the CIA, FBI and White House. The CIA, for example, includes a myth-buster pamphlet in its recruiting packet. A few takeaways: recruits probably won’t have to carry a gun and definitely won’t have to spy on their families.

Retired FBI employee Peter Wubbenhorst, a criminal justice professor emeritus at Saint Leo University in Florida, has seen his share of students coming through the program with preconceived notions about the FBI. “The most common mindset is that a degree in criminal justice will immediately open the doors to becoming an FBI agent,” says Wubbenhorst. “In reality, experience in law enforcement, the military, accounting or law is typically preferred first.”

Another tough reality: getting a federal government job can take anywhere from two to six months, sometimes even longer depending on additional hiring steps or numbers of applicants. “If you’re having difficulty getting a job with your department of choice, consider other federal agencies,” says Wolfe. “Once you’ve found a position within the federal government, it’s a lot easier to move around internally and amongst agencies.”

For students considering a career in U.S. government, Martin suggests taking some time in high school to identify skill sets, interests and what you have to offer the government. Explore websites and learn about different agencies. The biggest lesson she has learned is to keep an open mind. “I am a very goal-oriented type of person, so I really like that my job as a training specialist gives me the awareness of many types of developmental and learning programs and the opportunity to share those ideas with others to help them achieve their goals,” Martin says. Her day-to-day involves working with colleagues to provide them with professional and personal development opportunities, including on-the-job training and improved leadership skills.

Through her career with Homeland Security, Martin also became involved with Young Government Leaders, a nonprofit professional organization founded and led by young government employees. In addition to serving as the organization’s public relations director, she created the GOLD Academy to give college students a better idea whether or not a career in public service is right for them.

The government has internship and fellowship programs available to students at various levels, Wolfe says. For example, the Pathways Programs offer clear paths into federal service for high school, undergraduate and graduate students, in addition to recent graduates through federal internships or full-time careers. “I entered the government through an internship, so I think this is a great opportunity for students who might not have as much real work experience,” says Martin.

Government service is not for everyone, but if you’re hardworking, passionate and service-oriented, it’s a great place to try and change the world for the better, says McManus.

What are at least three myths or misconceptions about U.S. government jobs?

What are the Pathway Programs?

Using the links below, choose a government agency and research a related job. What did you learn? What skills are required for that job? Have you ever considered working for the government before?

One Woman’s Journey on the Path to Greener Plastics