Can You Find Economic Security in Today’s Tough Job Market?

In today’s unforgiving labor market, students need some intel on how they can make themselves more employable. Economists and career counselors weigh in on the importance of credentials, technology and, yes, loving what you do. If you want to repair bicycles, your prospects look good – but your salary, not so much.…Read More 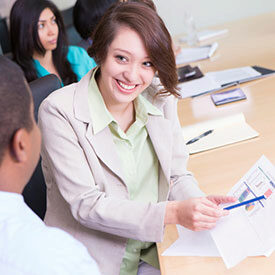 You hear so much lately about the struggling economy in the U.S., with a national 7.3% unemployment rate in October. The U.S. economy, the financial foundation upon which our society is structured, is the world’s largest. It involves producing, exchanging, distributing and consuming goods and services. When you buy a peppermint latte and chocolate-filled croissant each morning, you are contributing to the economy. Selling an autographed baseball on eBay? That’s the economy. Working at Shop-Rite three days after school? That’s the economy. Socking money away in your savings account? That’s the economy.

All kinds of professions and money-related activities contribute to the economy. And there are a number of ways to measure the economic activity of a nation, such as unemployment, consumer spending and the stock market. In the past several years, the unemployment rate has been high, consumer spending has been down and the stock market has hit big-time lows, all of which point to a weak economy.

Economists, the men and women who analyze and observe the economy, are keeping busy these days – and watching the job-market trends. An economist often spends time doing research, preparing and analyzing data and forecasting how the economy might change in the future. People rely on economists to let them know if the economy is improving or heading for trouble. Economists can study factors related to the economy, like jobs, interest rates, the stock market and taxes. They often work with numbers, charts and computers.

Steve Herzenberg is one of those rare people who knew, even as a child, exactly what he wanted to do – and found that his choice career also pays well. “As long as I can remember, I wanted to be an economist, promoting policies that would expand opportunity,” says Herzenberg, who eventually earned a PhD in Economics from MIT and is now executive director of the Keystone Research Center, a policy and research organization based in Harrisburg, Pa. “Fortunately, jobs for economists usually come with a good salary.”

The median annual wage for economists was $89,450 in May 2010, according to the federal Bureau of Labor Statistics (BLS). The demand for economists is expected to grow only 6% a year through 2020, according to the BLS. On the other hand, demand for bicycle repairers is projected to grow by 37.6% during that time. The drawback is the salary, which clocks in at $23,660 a year.

So, from the perspective of a gainfully employed economist, what is the best course toward economic security in today’s job market? More importantly, does one exist? Not necessarily, says Herzenberg. But young job seekers can watch the numbers and follow some steps to make sure they are maximizing their marketability.

First and foremost, he notes, you are not required to stay in one job forever, especially if prospects and the quality of the work look brighter to you elsewhere. Herzenberg’s wife Sara, for instance, majored in English and worked as a journalist (median pay of $36,000 a year; number of jobs shrinking by 6% through 2020, according to BLS), but later went back for a master’s degree in her second passion, environmental science (median pay: $61,700 a year; job growth of 19% through 2020). Today, she works with an environmental conservation organization.

“Credentials also matter,” says Herzenberg. “Like a college degree or an associate’s degree, an electrician or RN (registered nurse) certification. But make sure the credential will improve your wages enough to justify the cost of the training. And since no career choice guarantees economic security, it makes sense to explore careers that you’re passionate about.”

The market for what a college freshman is studying now is likely to change by the time he or she graduates in four years (or whenever), points out Susan Wise Miller, a national certified career counselor in Los Angeles. “[tweetthis alt=”” hashtag=”” url=””]Your college major is not as important as the analytical, functional and communication skills that you develop while in college[/tweetthis],” she says. “The idea is to learn how to learn, so you can transfer your skills. However, your specific major can make it easier or tougher to get a job – just ask someone who majors in engineering or information technology – but the fact that you successfully earned a degree tells a would-be employer that you know how to learn. [tweetthis alt=”” hashtag=”” url=””]Just about every kind of job is changing, so the idea is for you to be on the cutting-edge of knowledge or technology in whatever field you choose.[/tweetthis]”

Today, technology is important to so many different careers. One of Miller’s clients is a female book-publishing executive. In today’s digital age, she saw the writing (or lack thereof) on the wall, and decided to complete a master’s degree in library science. “She thought she wanted to become a newspaper librarian, but she realized that the degree in information management, formerly known as library science, in which she was enrolled at UC Berkeley was much more high tech than what she had seen in newspaper libraries when she did research on the field,” Miller says. “So after graduating, she ended up working for a portal and search engine, and her job title was ontologist,” where she organized and categorized information on the web. Her next position was as a library-planning analyst for the University of California, where she did digital library planning for all the UC campuses, and worked on budgets, file sharing, copyright issues and websites.

Strength in the Medical Field

“If you do what you love, then the money will usually come,” suggests Beverly Baskin, a licensed professional counselor and certified master career counselor who, with her husband, Mitch, runs New Jersey-based BBCS Counseling Services. “What’s important is to get a good education and to work diligently.”

Keep your eyes open for new opportunities. “If you’re fluid, you may be able to transfer your skills between jobs or even between industries,” adds Baskin, who also suggests backing up any degree with a foreign language, especially Spanish, Chinese or Russian, to be more marketable in the global economy. “[tweetthis alt=”” hashtag=”” url=””]Right now, just about anything associated with technology is good, but remember that specific job categories go through a boom-and-bust cycle.[/tweetthis]”

Also, as more people gravitate to medical and other related fields, employers want to see more education, which speaks to Herzenberg’s point about credentials. “There was a time when you could get a foot in the door of occupational or physical therapy with a bachelor’s degree,” Baskin says. “But now, you need at least a master’s for occupational therapy, and physical therapists will need a PhD to get licensed when they want to enter the field.”

And what of that career in economics? When it comes to the economy, there is always a lot to talk about. Economist Elizabeth Elmore is a professor of economics at Richard Stockton College of New Jersey in Pomona, N.J. During her career, Elmore specialized as a labor economist, skilled in the history of labor unions and eager to follow and analyze the market economy in the U.S. She has brought these skills to Richard Stockton, where she urges students to study economics. “Economics is one of the best majors you can pick because it is grounded in the liberal arts,” says Elmore. “It allows you to have a lot of flexibility in your career. You can work right after college in entry-level positions in economics [such as] a staff economist doing statistical analysis. It prepares you for law school and for grad school in economics. It prepares you to get a master’s in business and so many different areas like public policy.”

Think economics might be for you? Get out your calculator because math is a must. [tweetthis alt=”” hashtag=”” url=””]“You absolutely have to have quantitative skills to be an economics major and to be a working economist,”[/tweetthis] says Elmore. “You don’t have to be an undergrad mathematics major, but you have to feel confident in your quantitative reasoning skills and statistics.”

What is the economy?

What is an economist? Search current events and find at least one example of an economist contributing to the news.

What does Susan Wise Miller mean when she says, “The idea is to learn how to learn” in college?

Why do the experts say that the market for what a college freshman is studying now is likely to change by the time he or she graduates in four years? What is a boom-and-bust cycle for a job category? Can you think of at least one example?