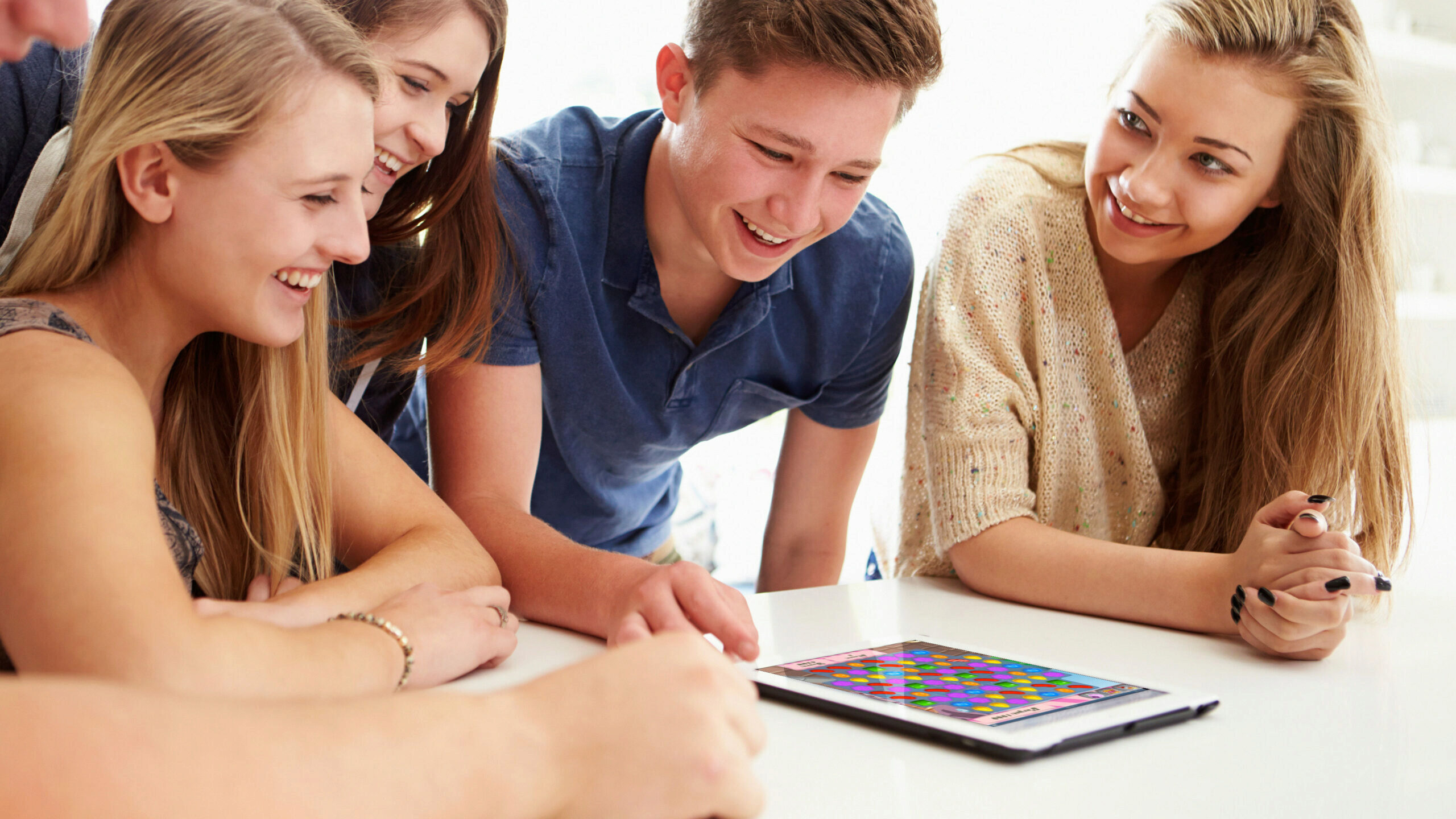 The gamer business community is buzzing this month with the news of what might best be described as a “sweet” deal. U.S. video game maker Activision Blizzard announced last week that it was buying King Digital Entertainment, best known for its Candy Crush Saga mobile game, for $5.9 billion. Activision Blizzard, which produces Call of Duty and the Skylanders series, to name a few, is based in Santa Monica in the heart of Silicon Valley, a region of northern California known for its technology entrepreneurs and startups. In a statement, the company said the purchase “will create one of the largest global entertainment networks with over half a billion combined monthly active users in 196 countries.”

Not too long ago, software powerhouse Microsoft bought Mojang, the maker of Minecraft, for $2.5 billion.

Clearly, game development is big business these days. But these two gaming deals are also notable because of where the companies being acquired got their start. Both King Digital and Mojang are Swedish-born. It seems that Silicon Valley and Stockholm have one big thing in common: they both spawn billion-dollar technology companies. After Silicon Valley, the Swedish capital produces the highest number of so-called “unicorns” per capita than any other global city. Unicorns are a group of hot start-up companies that are valued at $1 billion or more. With a population of less than 900,000, Stockholm has birthed global brands like Skype, Spotify, Minecraft and Candy Crush Saga.

Experts say a number of factors — including the global success of well-known Swedish companies, government foresight and infrastructure planning — have created an environment that has fostered 22,000 tech businesses in the city alone.

Spotify, a music-streaming service that may be one of Europe’s most high-profile startups, reached an $8.53 billion valuation this past year. Swedish telecom company TeliaSonera poured in $115 million, receiving a 1.4% stake. Think of it as the “pensioner meets the teenager,” says Martin Carlsson-Wall, a Stockholm School of Economics accounting professor. “The deal is a way for [TeliaSonera] to build its brand and associate itself with a younger, innovative and faster-growing company. At the same time, Spotify is perhaps too small and can build on the strength of a big company.”

Predecessor Swedish tech enterprises have set the pace for successful startups. In 2005, Swedish telecommunications company Skype was bought by eBay for $2.6 billion. Microsoft then bought Skype for $8.5 billion in 2011 in the largest takeover acquisition in Microsoft’s history. Swedish software company MySQL was bought by Sun Microsystems for $1 billion in 2008 and is now owned by Oracle.

A few more Swedish unicorns are on their way, says Joseph Michael, business development manager at Stockholm Business Region Development, a government enterprise. Audio streaming service SoundCloud started in Stockholm before moving to Berlin, Germany, and was valued at $700 million at its last funding round.

TrueCaller, an app that finds phone numbers and blocks spam calls, is backed by two Silicon Valley investors, Kleiner Perkins Caufield & Byers and Sequoia Capital. Users are mostly located in India, Lebanon and Jordan, and 200,000 are joining each day.

For a Scandinavian country with a population of less than 10 million, a little more than the size of New York City, Swedish businesses have always had to think outside the country’s borders. Companies like Volvo, Ikea, H&M, Absolut Vodka and telecom company Ericsson have paved the way for global success. A Swedish company typically begins to expand globally within a couple of years of its start. Sweden is so small that internationalization of companies is quite normal, notes Carlsson-Wall.

“Sweden does have the legacy of its Volvos and Ericssons. They realize that startups can be successful and diversify their economy,” says David Hsu, Wharton management professor. “A whole spectrum of companies can help a country be resistant in times of downturns.”

When Swedish multinationals became successful in the past, they contributed a lot of tax money to finance infrastructure and entrepreneurship ventures, says Carlsson-Wall. Hernandez explains: “Start-up and tech hubs don’t emerge in a vacuum. Even though we hail the young startups, they usually feed on the presence of large and established organizations that provide the technology and human talent required for the next big thing.”

To that end, Stockholm built the world’s largest open-fiber network in 1994 with 100% of businesses and 90% of homes tapping into that infrastructure today. More than 94% of the population is online with the fourth highest usage in the world. Over 91% of the population accesses the Internet at least once a week.

The Rise of Digital Natives

It comes as no surprise that the most common job in Stockholm is programmer with 18% of the city employed in the tech sector. University education is free as well, and institutions are starting to foster start-up clusters. Daniel Ek came up with the idea for Spotify during his first year of college at Stockholm’s Royal Institute of Technology, which graduates one-third of the technical expertise in Stockholm.

This kind of government planning has created a whole generation of highly educated digital natives who have grown up with a familiarity with computers and broadband. “The whole mindset has led to a very tech-savvy population,” adds Kartik Hosanagar, a Wharton professor of operations, information and decisions.

According to Hernandez, the Swedish start-up community has built on the strengths that Sweden has to offer, such as a highly educated population, social and political stability, and extremely high openness to new ideas. “One of my pet peeves is that many places are trying to be like Silicon Valley. But nobody can do that because Silicon Valley was the product of unique historical and social circumstances,” Hernandez notes. “That’s usually the genius of a start-up or tech or industrial hub. It can’t be replicated because the founding conditions are idiosyncratic. So the main lesson may simply be to build on existing strengths and focus on what is unique. That will prevent any geographic or local advantage from dissipating when others try to imitate.”

Overall, the Scandinavian start-up scene is still burgeoning, particularly the one in Stockholm. “Stockholm is the only city with a population of less than one million people with any unicorns. It’s a unicorn factory … and they’re not slowing down. There’s more in the works,” says Tyler Crowley, an American consultant who moved from “Silicon Beach” in the Los Angeles area to develop the Stockholm start-up scene for the city government.

Hosanagar agrees, noting that “there will be more and more coming out of Sweden.” One important reason, he adds, is that future startups will be less about tech and more design conscious. In the last 20 to 30 years, Apple, Microsoft and Google have made enormous strides with technology. Sweden has always had a really strong design sense with iconic brands like Ikea and Volvo. These days, success can be measured by how intuitive and convenient it is to use a particular piece of software. “Small innovations with really good user-friendly designs will be important, and Sweden has a really good leg up in that respect,” Hosanagar says.

What is a tech hub? Wharton management professor Exequiel Hernandez says, “Start-up and tech hubs don’t emerge in a vacuum.” What does he mean by this? Why is Sweden ripe for start-up success?

What companies or brands named in this article do you recognize? Did you know they got their start in Sweden? How does that help you better understand the growth of a multinational business and brand that must think outside its borders if it wants global success? Do you think it matters where a company starts if its products and services are ultimately successful? Why or why not?

What competitive advantages does Sweden have in terms of maintaining its tech-hub status and its ongoing development as an incubator for startups?

One comment on “You Won’t Believe What Candy Crush Saga, Minecraft and Spotify Have in Common”

Blogger Zina Kumok: Saving Money Helped Me Prepare for My Future and Even Find Love