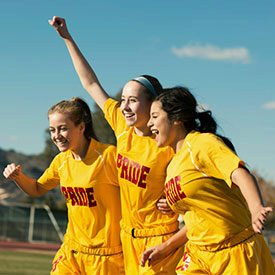 Sophia Kruger, 17, will be a senior this fall at Kingswood Oxford School in West Hartford, Conn. While a student this summer in the Wharton Leadership in the Business World (LBW) program, Kruger talked with her peers about their interests outside of the high school classroom. In this essay, she explores the importance of extracurricular activities in learning valuable business skills.

In November 2011, Occupy Wall Street — a movement in which people targeted the financial services sector to protest social and economic inequality — was raging in the U.S., and I was on a plane to Prague, Czech Republic, to participate in Model Government Europe (MGE). MGE is a simulation of the European Union. Each parliament is given two topics to discuss that reflect real problems that a particular country is facing. Throughout the conference, delegates are faced with a crisis that strikes the EU and are charged with the task of solving both the problems that were presented before the conference and the crisis. For example, the crisis in Prague began when terrorists fictitiously bombed the primary pipeline carrying oil from Russia into the EU.

Next to the Occupy Wall Street headlines in November 2011 was another real-life front-page piece of news: The European economy was hurtling full force toward economic collapse. The European economic crisis soon took center stage during my Prague simulations. At the MGE conference, each student adopted a representative in a European parliament. I was a member of the German Bundestag. We discussed the use of renewable energy and the role of women in the workplace from all aspects – economic, social, humanitarian — as we attempted to fix central problems in Germany. Soon enough I realized that all options required financial resources that we couldn’t access due to the failing economy. During a time of economic despair, our fictional German government simply did not have the funds to support changes like subsidized daycare for working mothers. I discovered that business and economics are intertwined with energy and the environment, social policy and human rights. Model Government Europe deepened my interest in business and the economy and underscored their far-reaching influence.

The relevance of business and economic principles to my life experiences didn’t end in Prague. I use that MGE lesson all the time. When I debate, for example, my partner and I receive the topic 10 minutes prior to the deliberation. Without the use of the Internet or any outside sources, we must form three points supported by examples. I always start by thinking of the economic consequences of the proposition. For example, one topic proposed creating an army under the direction of the United Nations. There were many problems with logistics, human rights and equality among nations. However, a key argument in the debate was ultimately the source of revenue needed to build and maintain a standing army. Member nations already pay dues to the UN. So from where will the additional financial capital come? I regularly approach my arguments from a business and economic perspective.

Business touches our lives in so many ways – even some we may not expect. I set out to learn if other teens use the time that they are not in class to explore a deeper connection with business, as I did with MGE. My studies this summer in San Francisco and Philadelphia at the Wharton Leadership in the Business World (LBW) program for high school students were the perfect platform for my research into how students leverage their extracurricular activities to deepen their understanding of business.

Marina Fortunato, a rising senior at Lycée Français de Shanghai in Shanghai, China, has a passion for fashion. She explored this possible career path further through internships at Sephora in Shanghai and Fendi in Rome. In both positions, Fortunato developed insight into the function of the companies and actually got to “manage large projects.” At makeup company Sephora, Fortunato was in charge of organizing presentations for managers. “I had to collect information and put together a PowerPoint,” she notes. She also led an IQ color project related to the classification of foundation makeup. Fortunato collected samples and bar codes from every Sephora store in China and matched shades. Ultimately, she felt proud of her work. “When I saw the actual project taking place, I felt like I had made an impact,” she says.

Fortunato’s internships gave her insight into fashion-related jobs, including design and production. She eventually wants to be a fashion buyer: “I can use tools I already have, but I still have a lot to learn.” As a fashion buyer, Fortunato will have to get to know her clients in order to spot retail trends. Through her internships, she says she learned a fundamental aspect of business: client philosophy.

Stuart Wang is a rising senior who hails from Inglemoor Senior High School in Seattle, Wash. Wang has become more connected to business through his involvement with DECA, as well as with his school’s music program. DECA (Distributive Education Clubs of America) is an association of high school students interested in marketing. “We learn about marketing and compete in an international competition,” he notes. In DECA, students write business plans and create promotional campaigns. “I got into business through DECA. After these activities, I realized that I really want to pursue business in school and as a career.”

Wang plays the guitar and has approached his interest in music from a business perspective with community-enriching results. “During the holidays, I recruited musicians at my school to go downtown and play music,” says Wang. The first year, the musicians collected more than $4,000, which they donated to the American Cancer Society. “I am filing a 501C(3) form to become an official nonprofit this year,” he adds.

According to Wang, one of the best aspects of the musicianship project was combining his interest in business with a humanitarian cause. He also learned about business through the process, honing his marketing skills by helping volunteers craft what they should say during community events. In addition, he  used human-resources skills to organize and manage his team of musicians. “It made business as a career more tangible for me,” he notes.

Getting Cakes to Kids on Time

Rising senior Ryan Klobus attends Syosset Senior High School in Syosset, N.Y. One of Klobus’s activities outside the classroom is to serve as the senate treasurer of his school. In this position, he works directly with the central treasury director of the school district. “I’m the liaison for clubs in my school to the school district,” he says. Klobus uses basic finance and accounting skills to compile monetary reports and maintains the checkbooks for all activities in the school that work with money, which is nearly every club. “It teaches monetary and fiscal responsibility,” he notes.

Jacquelyn Carroll is another student who has used after-school activities to explore her passion for business. Carroll is a rising senior at Saint Edwards School in Vero Beach, Fl., who has a taste for baking. She cooked up the concept of Bakers for Birthdays, a service club with student members who bake made-to-order cakes and cupcakes for children at the local Hibiscus Children’s Center, Youth Guidance and Samaritan Center. “It definitely made me interested in business,” she says. Carroll has to manage a large group of people, organize bakers and deliver the cakes to the birthday kids on time.

Carroll, who started Bakers for Birthdays in 2012, has come to realize that many of the techniques she uses for her club are important skills in the business world, and ultimately in the career path she chooses. “I’m getting closer [to figuring out what I want to do], but I’m still not there. Consulting sounds really cool, maybe being a manager, or maybe even starting my own business,” she says.

All of us have our own reasons for participating in extracurricular activities. I joined MGE to explore government and to travel abroad. However, the students I spoke with realize that our activities provide opportunities beyond fashion, music, student government and baking — they are windows into the potential of the world of business.

Why was Sophia Kruger’s experience with Model Government Europe particularly eye-opening on her path to a possible business career? What did she learn, and how does she apply it?

What does Stuart Wang mean when he says that his musicianship project made “business as a career more tangible for me?”

How might an extracurricular activity in which you are involved inform your business knowledge? For instance, do you play soccer or basketball? What valuable skills are you learning?