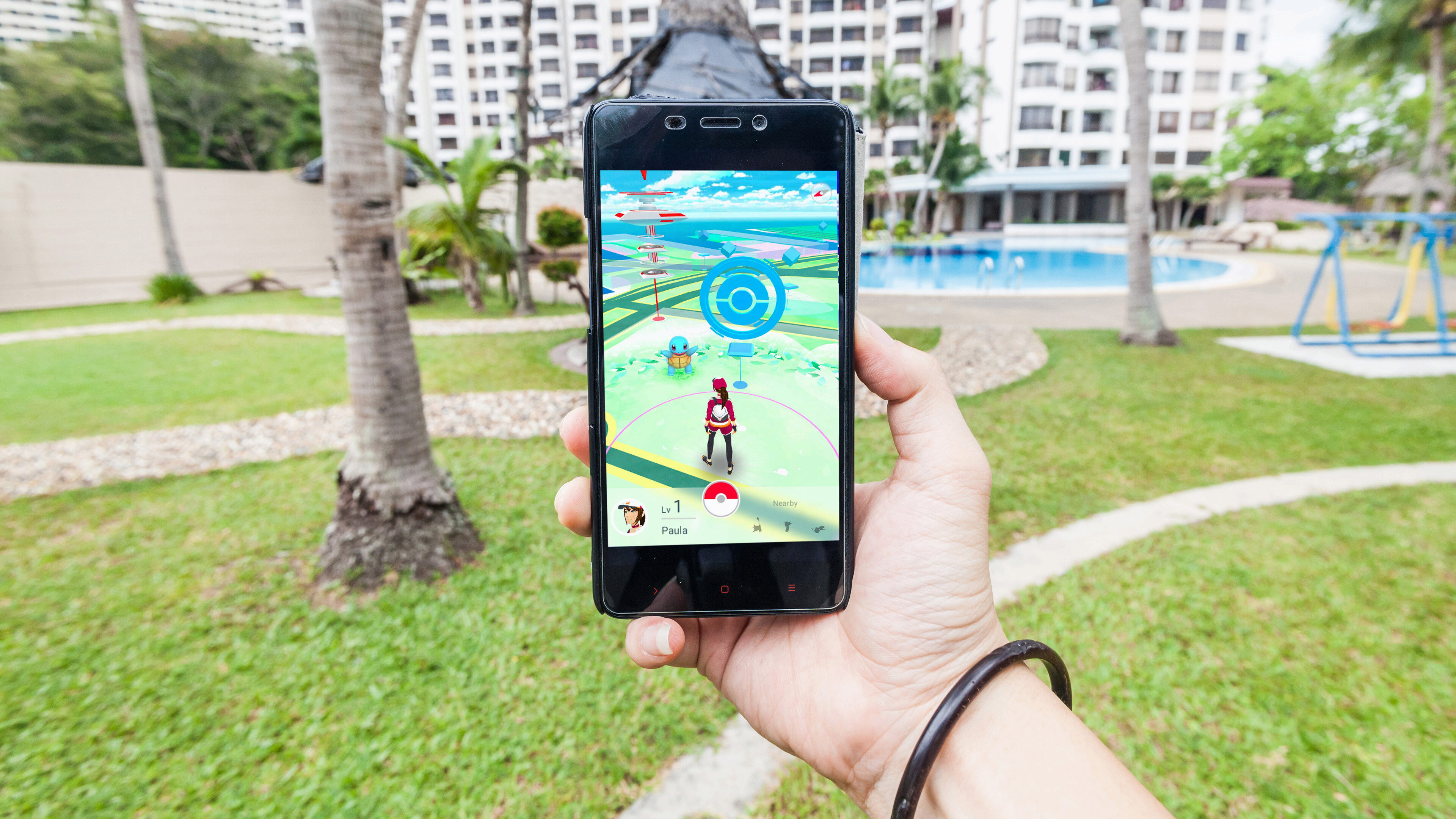 Why do you play “Pokemon Go?” Gage Welch, 14, and Hudson DeLoach, 16, both of Beaufort, South Carolina, spoke for lots of teens when they recently told their local newspaper that they were enticed by the “virtual reality” aspect of the app and experiencing “the Pokemon adventure in real life.”

“Pokemon Go,” a game that has millions of people roaming around the physical world to capture virtual characters, has been the hit of the summer of 2016. The allure is largely due to the app’s reality aspect, which in technology terms advances virtual reality one step further to a place that not many gamers have been. “Pokemon Go” takes what is known as augmented reality (AR) from a niche technology to mainstream.

Experts consider the game a moonshot that establishes augmented reality for the future. “One thing that helps ‘Pokemon Go’ is its novelty. It’s one of the first games to merge the digital and physical world,” says Kartik Hosanagar, a professor of operations, information and decisions at Wharton.

Augmented reality differs from its better-known cousin virtual reality, which is exemplified by Facebook’s Oculus, Google Cardboard and similar efforts. Broadly defined, virtual reality (VR) encompasses a set of technologies that places the user in a computer-generated, three-dimensional environment. Augmented reality mixes the physical with the virtual, superimposing a computer-generated image onto the view of the real world as seen through a headset or mobile device. Microsoft’s HoloLens technology takes augmented reality and uses it for everything from gaming to collaborating on documents and analytics. HoloLens is currently a developer project and not generally available.

While HoloLens is interesting, “Pokemon Go” is the game that is popularizing augmented reality, according to Wharton marketing professor Johan Berger. “’Pokemon Go’ is simple but remarkable,” says Berger. “It’s the first mainstream case of augmented reality applied to the masses.”

A key differentiator for “Pokemon Go” is that it takes commonplace technologies such as GPS, mapping and satellite services and combines them with location services, landmarks and Nintendo’s familiar characters, says David Hsu, a management professor at Wharton. Hosanagar adds that “Pokemon Go” has made it possible for augmented reality to blend into the background and allow the game experience to lead.

“Pokemon Go” players see their avatars wandering real-world terrain using a map that includes Pokestops, which are real-world landmarks such as churches or public art, and virtual gyms to test their skills. Characters are caught with Pokeballs. As a bonus, a screen shot can be taken that shows a mix of virtual Pokemon characters and real-world terrain. The goal is to capture the 151 original Pokemon. The game makes money through in-app purchases for powers and in-game currency. “Pokemon brings something familiar to the technology and provides a blended experience,” says Hsu. “It’s likely that 99% of ‘Pokemon Go’ users are having their first AR experience.”

“Pokemon Go” is built on the backbone of Google technology — which isn’t surprising since Niantic Labs, the startup that created the game, was spun out last year from Alphabet, the parent of Google. Many of the creators of “Pokemon Go,” including Niantic CEO John Hanke, helped to develop Google Earth and Google Maps.

Now called Niantic Inc., the firm made the popular augmented reality game Ingress, which also uses GPS, augmented images and allows players to engage at real locations. Ingress is popular, but it didn’t have the scale that “Pokemon Go” enjoys. In many ways, “Pokemon Go” builds on the platform that Ingress uses. For example, data submitted by Ingress users of local spots they thought should act as portals in that game served as the basis for determining Pokestops and gyms in “Pokemon Go.”

The ability to build an augmented reality game on top of technology pioneered by others bodes well for augmented reality, says Eric Bradlow, a marketing professor at Wharton. “’Pokemon Go’ is built on an existing platform that has mass distribution,” says Bradlow. “This will lead to a tremendous acceleration of its growth as opposed to an entirely new app and platform.”

Julie Ask, an analyst at Forrester Research, says the decision to build “Pokemon Go” on existing infrastructure was critical to its success. “Being built on a cloud-based service — Ingress from Google — allows ‘Pokemon Go’ to distribute and scale quickly to meet user demand,” says Ask.

In October, Niantic announced that The Pokemon Company, Google and Nintendo were investing $30 million in the startup. Of that sum, $20 million was cash upfront with an additional $10 million based on hitting certain milestones.

At the time, Hanke said the funds would be used to develop “Pokemon Go” for launch. The larger goal was “extending our platform to support a variety of experiences that support our core values of exercise, discovery and fun,” Hanke said in a blog post.

Berger notes that the success of “Pokemon Go” will likely bring in new developers to augmented reality. “It’s a simple game from a well-known brand so it already has somewhat of a built-in user base,” says Berger. “It should introduce a bunch of people to augmented reality and help it grow.”

Since the game’s launch, police departments around the world have issued warnings about inattentive driving, accidents and “Pokemon Go” players being targeted by criminals. Niantic has introduced a wearable device for “Pokemon Go” that allows players to perform actions without using their smartphones. In theory, this wearable device, Pokemon Go Plus, would curb some of the accidents occurring as players stare at their phones while walking. Pokemon Go Plus is available for preorder through Amazon, but the date of its availability is unknown.

Analysts are especially intrigued with the potential of “Pokemon Go” as a marketing platform. “It is a brilliant idea to have advertisers and physical locations pay for placement of in-game bonuses,” says Bradlow. “It’s a tremendous opportunity for analytics.”

Hosanagar notes that advertising can be easily added to “Pokemon Go,” as well as future augmented reality efforts. “Location-based advertising (LBA) is a natural addition,” he says. “While it isn’t clear whether LBA will dominate in-app purchasing for “Pokemon Go,” it is clear that LBA will be a very important monetization model for many more augmented reality games in the months and years to come.”

In addition, “Pokemon Go” and the augmented games that will follow are likely to be more social. That possibility is also going to bring in more advertisers and platforms from the likes of Google and Facebook, says Hsu.

“Augmented reality is very compelling to advertisers, and we’re only starting to see how valuable location-based marketing can be,” says Hsu. “There are aspects of hyper local targeting, cloud, social and mobile in ‘Pokemon Go.’ The reach for advertisers is very compelling.”

The challenge for augmented reality games will be to offer marketing and advertising without bogging down play. Indeed, Hosanagar says that what makes “Pokemon Go” successful is that users don’t notice the technology. “The important thing is that most of the user base is not thinking of ‘Pokemon Go’ as AR. Instead, they are thinking of it as a great gaming experience,” says Hosanagar. “That’s what was needed from a killer application for AR. The technology should be in the background and not be what the product is all about.”

Following the initial success of “Pokemon Go,” analysts quickly began debating how much money Nintendo would actually make from the game.

Jefferies analyst Atul Goyal said in a research note that Nintendo owns 33% of The Pokemon Company plus an undisclosed stake in Niantic. Combined with licensing and distribution fees, Nintendo could bolster its bottom line for years to come — especially if it monetizes the rest of its intellectual property such as Mario Bros.

Macquarie Research analyst David Gibson said the economics behind “Pokemon Go” are a bit fuzzy. “The title was jointly developed by Niantic, The Pokemon Company and Nintendo. It is unclear exactly what their economic interest is in the game, but we presume that out of every 100 units earned at the App Store, 30 would go to Apple (or Google Play), 30 to Niantic, 30 to Pokemon and 10 to Nintendo. Hence, we don’t think Nintendo will earn much directly from the game. However, Nintendo will earn income from its equity-accounted income of owning 33% of The Pokemon Company,” he said.

Experts at Wharton, however, say that early returns to Nintendo don’t tell the entire story. Nintendo has been a laggard in the mobile market, and “Pokemon Go” is a proof of concept that could presage more game launches. Nintendo typically confines its characters to its game consoles. Berger says that Nintendo is likely to shift to a mobile-first strategy and has to “be thinking about the next wave and hoping to ride it.”

Although Nintendo, The Pokemon Company and Niantic are obvious winners, experts at Wharton say Google will be the long-term victor. “Pokemon Go” may create an advertising marketplace that would enable Google to collect revenue. Other augmented reality products are also likely to leverage Google Maps, which will generate more revenue.

Bell says that the companies that own the mapping and ad platforms will benefit the most. Google has both. “Mapping is so critical because it is key to engagement,” he says. Hsu adds: “The truth here is that Google Maps is the most important part of this project. Location is the gateway to personalization.”

This article originally appeared in our sister publication, Knowledge@Wharton.

What is the difference between virtual and augmented reality and why is it important to make that distinction when talking about “Pokemon Go?”

How are Ingress and “Pokemon Go” connected? Why is this relationship so fundamental to “Pokemon Go’s” success?

“Pokemon Go” has important implications for advertising and marketing. What are they? Why is augmented reality compelling to advertisers?

One comment on “Reality Check: The Technology Behind “Pokemon Go””

Behind the Scenes of a Sneakerhead Startup