Building a Network: ‘One Simple Connection Can Lead to So Much’

Through his venture, GivingBackPacks, high school student Alex Swerdlow has learned the value of developing a social mission. At the same time, he has begun to master one of the most vital business skills: making connections. One simple e-mail can lead to endless possibilities.…Read More 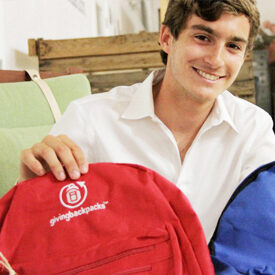 In many ways, it all started with a school assembly. Alexander Swerdlow and his classmates, high school students at Ransom Everglades in Coconut Grove, Fla., gathered in the all-purpose room last year to listen to the stories of local entrepreneurs. While entrepreneurship was somewhat new to most teens in the room, Swerdlow was already aware of the concept. Both his parents were entrepreneurs, awakening in him the desire at a young age to start his own business.

Months earlier, Swerdlow had done just that. Inspired by the message in TOMS founder Blake Mycoskie’s book, Start Something that Matters, he had begun developing the business GivingBackPacks. The model was simple: Sell a backpack and at the same time donate one loaded with school supplies to a child in need. “Some kids don’t have access to simple materials like pencils, paper and notebooks to take notes and quizzes,” says Swerdlow, who is a junior. “They don’t have supplies, they feel badly about themselves, and they have no incentive to learn.”

Motivated by the seed of an idea, Swerdlow immersed himself in online entrepreneurship blogs and Fast Company and Inc. magazine articles. He drafted a business plan, created a company logo and found a wholesale distributor for the backpacks. “Then we just started selling,” notes Swerdlow. “We weren’t really selling that many of them. We sold 25 by the time my sophomore year ended for $39.99 each. We didn’t even have a website yet — just a backpack with a logo, selling to friends, family members and [classmates] at school.”

Then he attended that entrepreneurship assembly, and, with a little perseverance, GivingBackPacks was born anew. Sitting on stage that day was Ransom grad Daniel Lafuente, CFO and co-founder of The LAB Miami. Described as a “collision point for Miami’s forward-thinking minds,” The LAB Miami is a collaborative working space for entrepreneurs eager to break into the city’s entrepreneurship community. Swerdlow immediately saw himself there and decided to do something about it. “I went up and spoke with Daniel afterwards and told him about GivingBackPacks,” recalls Swerdlow. “He gave me his card and said to e-mail him. He said he would love for me to come and work at LAB over the summer.” Right before school let out, Swerdlow followed up with his contact, and a few weeks later he joined The LAB Miami as a summer intern.

Swerdlow’s experience last summer catapulted his business to a whole new level of operational success. He learned about web development, product design, negotiating price and collecting marketing data, and he applied this knowledge to the development of his own social enterprise. He also worked alongside an inspiring group of driven, ambitious entrepreneurs ranging in age from teenagers to 40-somethings.

‘The Door to Infinite Possibilities’

Most importantly, he says, he learned the value of business relationships. “t’s all about understanding that one simple connection can lead to so much,” notes Swerdlow. “Everyone knows someone else, and one e-mail can connect you with hundreds of people. Had I not sent that initial email to Danny saying that I wanted to come to work for LAB over the summer, I wouldn’t have ever been given the opportunity [to make new connections]. For example, Danny talked to someone and said that he had a social entrepreneur at the Lab. I was given the opportunity to speak at an event in front of more than 250 people, and we were able to make more connections from there. It may be tough to break out of your comfort zone and build up the courage to send someone who is older than you an e-mail asking for something, but it’s so vital. The worst thing they can tell you is no. But when they do tell you yes, that opens the door to infinite possibilities.”

These days, Swerdlow’s social venture with a “buy one, give one” mission is in full swing. GivingBackPacks has so far donated 40 stocked backpacks to Chapman Partnership, a homeless rehabilitation center in downtown Miami. Over winter break this January, Swerdlow and his friends met the children – ages 5 to 13 – in person to pass out the new backpacks. “One girl came up to me, gave me a huge hug and thanked me,” says Swerdlow. “They were so excited to have school supplies.”

More recently, GivingBackPacks has become the official school supply distributor for The Haiti Initiative at Ransom Everglades, which supports an orphanage in Haiti. Members of the Ransom community – students, alums, parents, teachers – can purchase a bag for $25, and the company donates a backpack to a child at the orphanage. Says Swerdlow: “You can’t wait around for someone to offer to help — you have to set it all in motion. When you do, you really start to see progress.”

What was the key turning point for GivingBackPacks?

Have you ever had to step outside your comfort zone to make a new connection in the interest of personal growth? Describe that experience and what you learned from it. Did it lead to even greater opportunities?

Research business incubators and collaborative working spaces: How prevalent are they? What types of services do they provide? Where are they often located? What is one business that started this way and grew to be more successful?

The Ins and Outs of Interest — from a Student Loan Survivor

Millennials in the Workplace: Does This Sound Like You?