Since being introduced in 1985, the number of credit cards issued in China has grown at an astonishing rate, reaching 285 million in 2011, five times the number in 2006. MasterCard projects that annual credit card spending in China will more than double by 2025, and over the next decade, the country is expected to become the largest credit card market in the world by number of issued cards, overtaking the United States. This article, written by William Hart, Thomas Kidd, Lane Rettig and Nicholas Walker, members of the Lauder Class of 2014, takes a look at consumer credit in China.…Read More 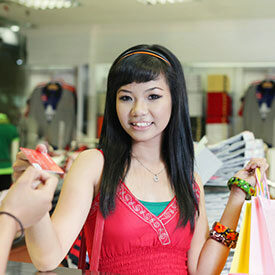 “I’m a little embarrassed.” Liu Jing leaned in closer and lowered her voice, revealing for the first time a hint of discomfort since the topic of credit cards had been broached. After a pause, she smiled, took a breath and said, “but let’s chat.”

Liu was born in Henan, a province in central China 600 miles northwest of Shanghai. Despite coming from a solidly working-class family, she was encouraged to study hard as a child and prepare for the gao kao, China’s rigorous college-placement examination. She received high marks and earned a coveted position at a public university in Beijing. While she had studied English in Henan, it was not until she arrived in Beijing that she discovered her gift for language.

After four years at the university and despite never having left mainland China, Liu gained a strong command of English and an understanding of Western culture and business practices. She stood out as a model of success within China’s stunted education system. She cultivated her skills by befriending Western exchange students and young British expatriates working in the capital. Due to her competent English, she landed a position as a junior executive at a digital advertising firm. While her salary was slightly below the entry-level standard for white-collar jobs in China, the position allowed her to remain in vibrant, growing Beijing.

Soon after entering the workforce, however, Liu began to grapple with economic reality. Her salary barely covered her rent and other basic necessities. She also realized that with Western friends came lifestyle choices. If she wanted to maintain her English skills, she would have to be comfortable accompanying her Western friends to restaurants and bars, which meant additional spending.

On the back of a napkin, Liu spelled out her financial conundrum. As a junior executive, she netted 5,000 RMB (US$800) a month after taxes. From this, she paid 2,000 RMB (US$320) per month in rent for a shared flat near Beijing’s fourth ring road. This left her with 3,000 RMB (US$480) a month in disposable income, or 100 RMB (US$16) a day. With this sum, she had to cover her remaining living expenses. Liu tried to stretch her income as best she could, but when she suddenly lost her job due to a company acquisition, she was hard-pressed to make ends meet.

At this moment, a friend recommended that Liu apply for a UnionPay credit card from one of China’s large state-owned banks. She was hesitant at first, given the Chinese cultural tendency to avoid borrowing, but this was the help she needed. As she was no longer employed and was in a weak position to apply for a line of credit, she begged a friend in the accounting department of her former company to forge the necessary documents to show she was still employed and had a monthly income. Begrudgingly, her friend helped. A month later, Liu had her first credit card.

At first, Liu used the card to make ends meet. She would borrow against her credit at the beginning of the month and pay off most of the balance within 30 days. But as time went on, the allure of this “extra” income and the social benefits it allowed compelled Liu to slowly increase her borrowing. She soon discovered that borrowing is a slippery slope.

After using the card for one year, she had accumulated debt of 15,000 RMB (US$2,400), or three times her previous monthly income. “I don’t really know exactly how my credit card works, like how much interest I need to pay every month,” she acknowledged. Even so, she was acutely aware that this money would need to be repaid eventually.

She had no plan for paying off the balance. She would try to save more, and perhaps her next job would pay her a higher salary. Until then, Liu Jing, an exemplar of China’s new middle class, was trapped.

A Variety of Credit Options

Since being introduced in 1985, the number of credit cards issued in China has grown at an astonishing rate, reaching 285 million in 2011, five times the number in 2006. Growth has remained consistently high and is expected to continue at 31% per year over the next five years, according to an RNCOS report on the industry. According to the 2012 Chinese Credit Card Industry Bluebook, US$1.2 trillion of purchases were made with credit cards in China in 2011, a year-on-year increase of 48%. This figure represented almost 40% of all purchases of consumer goods. In 2000, the corresponding proportion was less than 10%.

MasterCard projects that annual credit card spending in China will more than double by 2025, and over the next decade, the country is expected to become the largest credit card market in the world by number of issued cards, overtaking the United States. Although the figure is high, it is worth noting that in China, credit cards are still used mostly for large-ticket items, while cash is still the predominant payment method for smaller purchases. Indeed, one study on credit card holders in Shanghai showed that 80% of purchases below 100 RMB (US$16) are still made with cash.

The needs of the family have always come before those of the individual in traditional Chinese culture. This, in combination with demographics, has exacerbated the trend toward increased reliance on credit. China’s rapidly aging population and the government’s one-child policy have created a “sandwich generation”: those married with a young child and aging parents who have significant financial responsibilities that lead to higher credit card use. A Jiao Tong University study also examined attitude factors that drive credit card use, concluding that “social power,” the desire to display material wealth, played a significant role in the willingness to take on debt. These findings point to the adoption of Western consumer-centric attitudes and the shedding of traditional reluctance to take on debt among young, urban Chinese.

“I have access to credit, but would only use it as a last resort,” said Zhou Lin, a young entrepreneur based in Beijing. In 2007, Zhou opened her first boutique in Beijing’s Haidian District, selling Korean and Japanese apparel to fashion-conscious university students. Since then, she has opened new stores and expanded beyond bricks-and-mortar to new sales channels, including a robust e-commerce platform. With a keen aesthetic sense and an ability to hone in on China’s ever-changing fashion trends, she is part of a wave of young Chinese entrepreneurs with their fingers on the pulse of China’s consumer demand.

Zhou readily admitted that she had more than one credit card. “I applied for them because of the benefits they provide. This one gives me deals when I travel abroad. The bank that offers this card organizes shopping events in Beijing, and if you use your card, you can get deals.” Almost all of Zhou’s friends had cards as well. She noted that having a credit card in the early 2000s was a status symbol. If you had one, it meant that you or your family had money.

In recent years, however, the plastic cards have become commonplace and no longer bestow an air of privilege upon their holders. “I’ll carry them when I travel outside of China for business,” Zhou added. “If something goes wrong and I have to stay for an extra few days to meet with suppliers, I know my credit will cover me.” Despite having multiple credit cards, Zhou rarely, if ever, used them in China. When shopping in Beijing, for example, whether for personal purchases or for business, her cards rarely left her purse. She attributed this behavior to her experiences with credit when she was 19.

When she left Shanghai to attend a university in Beijing, Zhou’s father issued a duplicate of his credit card under her name, for use in an emergency. While a common practice in the West, Zhou’s situation was quite rare in China at the time. She was the only one among her college friends with a credit card.

One day, after a prolonged argument with her father over the phone, Zhou decided to take revenge and used the card to go on a spending spree. She recalled that when her father received the bill, he was outraged and devastated. He spent the next few months paying off her debt. This taught Zhou an important lesson: Credit is dangerous and its use has serious implications — a belief consistent with traditional Chinese values.

Despite rapid economic growth, the Chinese government has recently been attempting to spur consumer spending, which has remained stubbornly low as a proportion of Gross Domestic Product (Gross Domestic Product). Before the global financial crisis, the cliché was, “Chinese save, Americans consume,” with the average saving rate in most Chinese households running at over 40% of annual income.

However, as consumption plummeted in Western countries in the wake of the financial crisis, the Chinese government realized the importance of encouraging domestic spending as a way to compensate for diminished demand for its exports, and it has attempted to change the savings culture. In the U.S., the credit card industry helped give rise to the middle class and the culture of consumerism. The Chinese government has begun deregulating the industry in an attempt to achieve the same result.

As China continues to evolve culturally and its financial institutions continue to mature, growth in the availability of consumer credit is only natural. Will a sophisticated ecosystem around personal credit, including the regulatory system and a cultural familiarity with and acceptance of credit, develop as it has in Western societies? Will the typical Chinese credit card customer look more like Liu Jing, on a slippery slope to insolvency, or like Zhou Lin, whose early credit-related mishaps fostered a mature respect for the benefits and risks of credit? The impact of consumer credit will have far-reaching implications for the overall direction of Chinese economic development.

Why is credit card use on the rise in China?

Does the adage, “Chinese save, Americans spend” still hold true in China? Why or why not?

3 comments on “Credit in China: A Culture of Consumer Spending?”