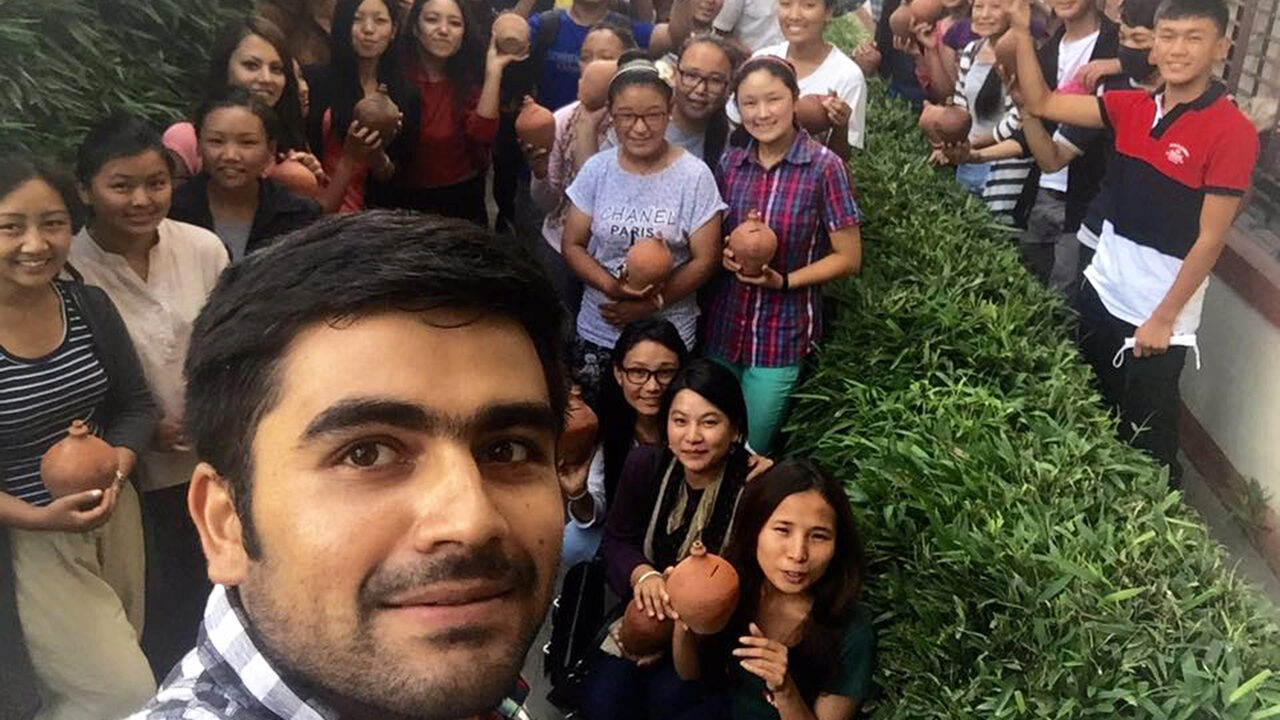 April is Financial Literacy Month in the U.S. To honor the importance of personal finance and the power of making smart decisions about the money we earn, KWHS is featuring profiles in April of people from around the world who are champions of financial awareness and inclusion and money management.

To understand Nepal, a landlocked country in South Asia located in the Himalayas, is to consider recent economic news out of the capital city Kathmandu. The Asian Development Bank projected that Nepal’s economy will grow 4.9% in fiscal year 2018, compared with 6.9% in 2017. The forward-looking numbers in this Macro Economic Update Report about Nepal are based on a few key factors: the weather and how it has influenced farmers. The report notes, “There is a slight upward revision of the 4.7% growth forecast published in its September edition last year, reflecting better-than-expected harvest despite floods in mid-August.” The report goes on to say, “With about one-third share of GDP [Gross Domestic Product], agriculture continues to provide livelihood to two-thirds of the country’s population, but mostly at a subsistence level” — in other words, a minimal level that enables farming families to barely get by financially.

It is little wonder, therefore, that a significant percentage of people in Nepal do not have access to financial services. And those who do don’t really know how to take advantage of them or to even begin to manage their money.

‘It’s All about Money’

It was a reality that Prakash Koirala had witnessed from a young age growing up in Dolakha, Nepal. “I was born in a very rich family. At the same time, the community where I was born, I saw the different kinds of people, as well,” notes Koirala, who is 26 and now lives in Kathmandu. “They were living in extreme poverty. They were struggling to collect their lunch or dinner. That really motivated me to do something in the field of finance or economics.”

Koirala set out to become an economist, but quickly identified a much more hands-on way to impact the lives of his neighbors. “I realized it’s all about money. Money drives people into misery and into happiness,” says Koraila, who began to promote financial literacy and inclusion in 2011 when he was just a teenager. He later spent extended time in rural parts of Nepal to understand the demands. “Educating people, especially children and women, about how they can use their money was a better way” to make a difference.

Through his company FinLit Nepal, Koirala has developed a financial literacy curriculum that is based in the Nepalese context. He believes strongly in teaching basic financial skills that will empower students and especially women to save their money and ultimately become a part of the country’s financial system. He and his small team of staff and volunteers work with school groups to provide month-long lessons in financial literacy. Koirala’s “school bank” concept starts with a piggy bank (that isn’t always shaped like a pig). “I ask them to save money in this piggy bank for one month,” he says. “When it fills up, we break it open and they have 3,000 to 4,000 Nepalese Rupees [about $38 U.S. dollars]. I ask them to go to the nearest financial institution and to open a bank account and save that money in the bank.”

“The world is moving to digital currency, but in rural Nepal they don’t know how to have a bank account or manage money.” — Prakash Koirala

As an extension of his financial training, Koirala also works with women in rural areas who take out microloans – a few hundred U.S. dollars – to run very small farming cooperatives or sewing businesses. He teaches them to keep financial diaries of their income and expenses, as well as how to use their loans appropriately and to draw up business plans so they can ultimately have access to even bigger loans. He brings these women together to share their stories of financial success and access and to mentor other women.

His vision is simple: Financial literacy empowers people. “Money is all about freedom,” suggests Koirala, who was a 2015 Child & Youth Finance International youth financial education awareness winner and has also won more recent honors from the British Parliament and the government of Nepal. “The world is moving to digital currency, but in rural Nepal they don’t know how to have a bank account or manage money. We need to teach our peer and our community so everybody can understand the basic components related to financial literacy.”

Koirala’s latest creation is a comic book that teaches basic financial concepts, everything from piggy bank savings to understanding interest rates on loans. As a council member at the U.S. Embassy Youth Council in Nepal, he is also determined to help the country implement an effective national strategy around financial literacy. “In the absence of baseline data about the financial literacy level of people in different demographic and socioeconomic characteristics, it is hardly possible to formulate and implement efficient and effective financial literacy policy and strategy,” notes Koirala. “I would recommend to government that, before designing and implementing national strategies, to measure the level of financial literacy in the context of a particular district. I would also advise them to create an automated school deposit and withdrawal management information system (e-banking) to promote savings amongst school students.”

Students hold a special significance for Koirala because of their passion to take what they learn in his classes back to their families. “I taught basic money management to a girl named Ramila,” recalls Koirala, who does outreach to students age 12-18, and college-age students as well. “She passed on what she learned to her siblings and her mother. Now all the family members have bank accounts. She has decided not to get married at a young age and to teach others what she has learned and is training others to become teachers. If we want to make an impact on society in the next 10 years, we need to focus on the children.”

What is financial literacy?

Using this article, as well as the financial literacy champion articles that appear in the Related KWHS Stories link, research financial education efforts around the world. Discuss what you learned in a paper or with a group.

Challenging the S’mores Legacy with a Campfire Innovation