Frozen flip-flops, premium content and human truth -- mash them all together and what do you have? A colorful picture of the future of advertising. During a recent Wharton event, students talked to advertising and marketing execs about the messages they create and the consumers they hope to reach.…Read More 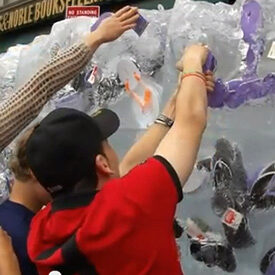 You’re walking down the street in New York City on a sweltering summer day and as you reach Manhattan’s Union Square, you are greeted with the most unusual sight: a giant ice cube packed with frozen, suspended flip-flops. A crowd has formed, some bystanders waiting for the inevitable melt to send a flop or two toppling their way, while still others are chipping and pulling at half-exposed sandals.

Only at Old Navy. That’s right, the clothing retailer found an innovative and “cool” way to interact with consumers that left Sara Sodine, a Wharton senior who happened to be walking through Union Square that day, feeling a definite “connection with the Old Navy brand.” It was less about the free flip-flops, which retail for less than $5, and more about the experience and, notes Sodine, the company’s ability to “interact with the environment.”

Perhaps never before has the climate for advertising and marketing been so dynamic – and creative. The growth of social media, endless cable channels and smart consumers has transformed the landscape and created new opportunities and challenges for reaching people at the right place and with the appropriate advertising message — a message that ideally inspires loyalty to a particular brand.

How best to do that? During a recent global advisory board meeting for the Wharton Future of Advertising — a program that acts as a catalyst for deeper insights, bolder innovation and the broader positive impact of advertising – Wharton and University of Pennsylvania students offered their visions of the future of advertising to a room of industry executives. Here, Knowledge@Wharton High School presents some of their insightful ideas.

“The role of advertising for a long time has been to inform people about products and how they should be used. Its two main purposes (from David Ogilvy’s book on advertising) are to inform people about the existence of products and how to use them and social affirmation. I think those two things are increasingly not relevant for advertising. I get social affirmation from the many networks we have where friends can recommend things to me, and I can find out about products and how to use them through many sources on the Internet. Now that we have all these tools for consumers to make media — Instagram to share photos, Twitter, short ideas, and blogs through which I can share so many things – there is no more room for bland, uninteresting content. Advertising agencies have to up their capacity to produce premium content. Netflix did this with [its show] House of Cards. House of Cards is basically an ad. At some point it became cheaper to acquire [customers] through content than to acquire them through ads. Increasingly, companies will look to firms to help them create premium content in order to attract people.”

“Brands are getting more and more human. People are spreading content that they are excited to share and that hints at a human truth. I know that term gets bounced around a lot – “the human truth.” What’s that golden nugget? That golden nugget sometimes lies in something as simple as my constantly misspelled name at Starbucks. [tweetthis alt=”” hashtag=”” url=””]It is genius that Starbucks has not said, ‘Oh my gosh, our clients are freaking out because their names are constantly misspelled on their cups.’[/tweetthis] If your name is Janina, I can show you a bunch of really interesting [variations] in spellings. But people are taking pictures of their cups and putting Starbucks all over their social networks. It’s everywhere, and it’s comical, light-hearted, fun and human. We make mistakes; even if we’re a brand, we’re not always going to spell your name right, but we’re going to keep this [practice] going. This light-hearted attitude is at the core of something more complex, something that is hard to figure out. How do we lighten a brand that makes it conversational and easy to share? If we can communicate and target that way, we are going to serve ads that people want to see, hear and experience.”

“In the future, I feel ads will become more useful to consumers. On Facebook, for example, you will see [more] ads that are targeted to you. Right now, a lot of people feel these ads are invasive and creepy. Over time, people are going to start to see them as useful and beneficial. One way that companies can improve is by getting people’s feedback and asking consumers what advertisements are important to them and what ads they want to see. Hulu is the first company I’ve seen that does this. When you watch programming on Hulu, they’ll show you an ad and ask you, ‘Was this ad relevant to you?’ By asking this sort of question, companies are gathering data about people who are watching, but more importantly, it is showing consumers that businesses do care about the messages they’re sending to you. It’s not just about creating a message and then giving that final word to the consumer. It’s more about starting a conversation; the message can change and mold over time based on people’s responses.”

“It’s so powerful for brands to get out there and make a meaningful impact, not through the products but through the messages they’re sending. What I love about advertising is also what I don’t like about it. Through my research this summer — I was sponsored by Wharton — I studied leadership development in high school girls. I talked to [more than] 700 girls in the U.S. and also in nine countries. I asked them to rate their confidence on a scale of 1 to 10, and the average girl rated her confidence at about a 5. What factors influence that? The No. 1 thing is media and advertising. If she sees a girl in a jeans campaign who is a size 0 and she’s not a size 0, she feels really poorly about herself. [tweetthis alt=”” hashtag=”” url=””]Brands have a socially responsible mission.[/tweetthis] How can they spread their message, increase their productivity and also send a great message to girls? I think advertising should be a two-way street. As producers and entrepreneurs, we’re putting our product out there, but we should also be listening to what the people have to say. They are driving our demand and paying us at the end of the day. If we could live in a world that has an interactive relationship between consumers and companies, I would be a happy entrepreneur.”

“[tweetthis alt=”” hashtag=”” url=””]Advertising has switched from pitching a product to the art of storytelling[/tweetthis]. The best advertisements today aren’t the ones that explain what a product does because that is something that any consumer can figure out. It’s more about impacting the consumer so he or she will remember this compelling commercial. There are two ways to accomplish this: scale and impact. When HBO was promoting Season 3 of [its show] “Game of Thrones,” they had a three-tiered format. They started out having this ad on the cover of Entertainment Weekly, just a silhouette of a dragon announcing the premiere. A couple of days later, they took over the entire spread of The New York Times with this recurring theme of the silhouetted dragon, which ultimately became the silhouette of the HBO building in LA. It’s not necessarily saying what the show is about or why you should see it; it is creating that image for the consumer. On the impact side, Procter & Gamble did the mother’s day campaign during the [2012 London] Olympics, a commercial that brought tears to people’s eyes. (The hardest job in the world is the best job in the world. Thank you, Mom. P&G: proud sponsor of moms.) It has stayed in my memory. It makes me much more attentive to what P&G is doing and makes me love P&G’s brand overall.”

“Once upon a time, there were three channels and [advertisers] would hit everyone by going to them. That’s not the case anymore. In this world, we have unlimited access to whatever content we want. It’s about putting your ads in the places where people choose to be, versus where they are out of necessity. Google’s new operating system, Kit Kat, [is a great example]. (Google named its latest Android phone Kit Kat after the Hershey candy bar, marking the first time the company has aligned in this way with a brand-name candy). People choose to use their Android phone because it is part of their identity. It’s the screen they probably look at most every day. The fact that Hershey was able to collaborate with Google, and create a place where they can speak to that person in every single interaction, is an incredible [marketing] opportunity. [Integrating] ads into content that I want and building that relationship is the key to delivering brand promise.”

Think for a moment about traditional advertising – through media like newspapers, magazines, radio and TV. How is this changing? More specifically, how is social media transforming the advertising and marketing landscape? Give some examples.

Katlyn Grasso says brands have a socially responsible mission. What does she mean by this? Do you feel negatively influenced by certain ads? Give examples.

What is your favorite advertisement and why? How did it speak to you? Through humor, emotion, information?

What are your ideas about the future of advertising? Can you think of any other points that these students have not touched upon?

One comment on “Student Visionaries Imagine the Future of Advertising”

Future of the Business World: Students in Vietnam Give Small Loans to Low-income Borrowers