Meet Me at The Clubhouse: Burgers and Double Bottom Lines in Sierra Leone

In 2011, Laurence West moved from England to the small African nation of Sierra Leone to use what he had learned in the corporate world to help raise money for an NGO called Street Child of Sierra Leone. His task: Run a small network of businesses, manage inventory, train local employees and work toward a successful double bottom line. …Read More 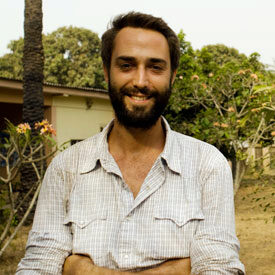 Sometimes a little blurb in the Tuesday paper can change your life.

That was the case for Laurence West, a young Brit who at the age of 24 was working for a business consulting firm in Brighton, in southern England. He was perusing the paper on the bus on his way to work one morning in September 2010, when he happened to see a short article about an NGO called Street Child of Sierra Leone. The organization was doing important work in one of the world’s poorest countries, and they needed some help. West decided to get in touch.

Nine months and several emails later, he stepped off a plane in the small West African nation of Sierra Leone. His job: Use his experience working in the private sector to help Street Child earn some money to support its work with children. West was taking on a brand new position, which meant that he would have to figure things out as he went along. But he was eager for a challenge.

The Suffering of Children

In Sierra Leone, it seems, there are challenges everywhere you look. The country suffered through a horrific civil war that lasted for most of the 1990s, affecting every corner of the nation. Sierra Leone’s children suffered terribly: Many lost their parents or were separated from their families, while some were fed drugs and forced to become soldiers. Thousands of children ended up living on the street, where they started begging, stealing or even selling themselves for sex.

Enter Street Child of Sierra Leone, a charity group that has its headquarters in London. Founded in 2008 by an Englishman named Tom Dannatt, the organization runs support centers for Sierra Leone’s street children — safe houses where the kids can come for food, shelter and training as well as professional help to reunite them with their families. Street Child is also building schools in remote rural areas where many children don’t have easy access to a classroom.

It’s important work, but it requires a steady stream of funding — and that’s where West comes in. To decrease its reliance on money from outside sources, Street Child decided to open up a small network of local business operations — shops, bars and restaurants — whose profits would support the NGO’s work. The new ventures would have a double bottom line: creating financial profits as well as tangible social benefits. While a company’s traditional bottom line measures fiscal performance – profit or loss – a business that seeks a second bottom line wants to measure its performance by the social impact it can make, or how successfully it is giving back.

West’s task was to get those ventures off the ground and make sure that they were well managed. It was a significant undertaking, and it hasn’t always been easy.

Since he arrived in May of 2011, West has spent much of his time managing Street Child’s flagship venture, a bar and restaurant called The Clubhouse, which is located in the booming mining town of Makeni in central Sierra Leone. With its growing population of miners and construction workers — many hailing from places like Australia, South Africa and the United Kingdom — Makeni was ripe for an expat-friendly place to hang out. The Clubhouse is the only restaurant in town where you can buy Western treats like pizza or hamburgers, and it has attracted a loyal crowd of customers since it opened last year.

On a busy night, The Clubhouse can turn over more than four million Leones, or roughly $1,000 U.S. dollars – all in cash. “Because the businesses are cash rich — meaning we have huge amounts of money flowing through them — we have to make sure that we control that tightly on a day-to-day basis,” West says.

‘We Invest in Our Staff’

Back home, cash management and taking stock of inventory would be done electronically, but in Sierra Leone (where electricity is unreliable, if you’re lucky enough to have any at all), it has to be done by hand. So West introduced systems that would allow him and the staff to do just that. At the shops, where they sell things like snacks and toiletries, staff members take inventory once every two days. At The Clubhouse and the other bars, they tally everything up two times each day.

West was also faced with the challenge of training the Sierra Leonean staff — everyone from waiters to cooks to finance managers — to operate at the same standards that he would expect to see in businesses back in Britain. In Sierra Leone, where literacy rates are low and a service industry basically non-existent, this was a tall order. “We invest in our staff, and we train them quite heavily,” West says, noting that all of the hard work has paid off in the form of “absolutely enormous” changes in the staff in the last year. “We got to the point where we were pretty happy with their level of service,” he adds. “It’s just the small details now.”

West, now 26, plans to keep working for Street Child for at least another year. After that, he’s not sure where he will end up. But wherever he is, and whatever job he takes, one thing is for sure: He wants to keep working toward that double bottom line.

Why was Laurence West a good candidate to work for Street Child of Sierra Leone?

What is a double bottom line?

Why is Sierra Leone an especially challenging place to teach business skills?

Have you ever worked for an NGO? Post your comments to the story and on our Facebook page at http://www.facebook.com/whartonhs.

The Conversation: 3 Things to Know About the Direction of Data Analytics