A Year in Publishing: Secret Meetings and the Powerful Threat of Digital

Publishing houses are scrambling to determine how to cope with the rise in digital reading. The iPad, the Kindle, the Nook and the Sony Reader, the strongest players in the eReader market, are four of the biggest threats to the print publishing industry. With everyone reading on a screen, how do publishers make a profit? Just this week, on December 18, Pearson Plc’s Penguin Group, a book publisher, reached a settlement with the U.S. Department of Justice in a case in which Penguin was accused of forging a deal with Apple to prevent other ebook sellers from discounting their prices. KWHS explores this bold deal between Apple and book publishers, the resulting anti-trust lawsuit and the future of traditional book publishing.…Read More 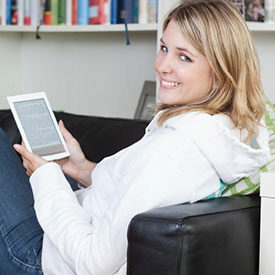 “Publishing is dead.” Reputable news sources like USA Today, The Huffington Post and The Guardian have all printed stories with this headline. And everyone points to digital innovation as the culprit. Are eReaders the funeral song of publishing?

The iPad, the Kindle, the Nook and the Sony Reader, the strongest players in the eReader market, are four of the biggest threats to the print publishing industry. Digital books, otherwise known as eBooks, make up an increasing percentage of overall book sales in the U.S. — 8.3% in 2011, up from 3.2% the previous year, according to industry reports from IBISWorld, a market research firm. Publishing houses are scrambling to determine how to cope with the rise in digital reading. With everyone reading on a screen, how do publishers make a profit?

Once upon a time, when books were printed with ink and on paper, publishing houses charged an average of $26 for a crisp, new hardcover. Amazon.com, the world’s largest online retailer, prices most of its new eBook releases at $9.99, according to The New York Times. With such competition, publishing houses can no longer control book pricing as they once did.

Apple, resenting Amazon’s reign over the eBook market, in the past few years arranged secret meetings with the major players in publishing, known as the Agency Five — Hachette, Penguin, Simon & Schuster, Macmillan and HarperCollins — to disrupt the online retailer’s power. These meetings were used as evidence in a lawsuit brought against these corporations in May 2012 when they were charged with conspiring to fix prices, which is a violation of U.S. anti-trust law.

Anti-trust laws protect competitive markets and prevent monopolies from gaining power over an industry by making it illegal for companies to collude or fix prices. According to a release from the attorney general of Connecticut, George Jepson, Apple and the Agency Five “conspired and agreed to increase retail eBook prices for all consumers” and “agreed to eliminate eBook retail price competition between eBook outlets, such that retail prices to consumers would be the same regardless of the outlet patronized by the consumer.”

Even with the legal risk and because Amazon was such a threat to their business model,  the Agency Five and Apple felt the pressure to take drastic measures. John Zhang, a Wharton marketing professor, says, “What is at stake is the extent to which publishers can control the prices they are charging to the end users, which will ultimately affect their ability to leverage new technologies and innovate. The publishers are concerned that if they lose this control, they will be at the mercy of giant retailers.” Because Amazon’s prices are so low — actually selling books at a loss — there is no way for print publishers to make a profit.

So what were the details of this alleged conspiracy? Apple cut a deal with the publishing houses so that the books sold by the Agency Five on Apple products (i.e., the iPad) would be offered at the lowest prices. No other device (Amazon’s Kindle, Microsoft’s Nook, the Sony Reader and so on) would be able to sell books for a cost lower than Apple’s price. That way, the Agency Five could determine the price instead of Amazon, and Apple would reap the benefits of offering the best price on the market — a strategy called agency pricing, which is sometimes illegal if used to hinder market competition. According to paidContent, an online media hub that covers the digital media business, “The agency model lets publishers set higher prices and ensures [that] customers don’t become used to cheap eBooks.”

In doing this, Apple became, in business terms, a most favored nation (MFN). PaidContent explains MFN: “If we buy your supplies, you have to promise us that no other buyer will sell these at a lower price.” This is not strictly illegal, but lawyers in the case claimed that the way the MFN clause was used “crossed a line.”

According to Attorney General Jepson, by hindering competition, the Agency Five and Apple made people pay “tens of millions of dollars more for their eBooks.” Hachette, HarperCollins and Simon & Schuster have agreed to a settlement of $69 million. Just this week, on December 18, Penguin agreed to drop any agreements with Apple and other ebook sellers that prevent price discounting. The settlement terms were reportedly similar to ones that the Justice Department reached with the other three publishers in April. A hearing is scheduled in February 2013 for Macmillan and Apple, who have not decided to settle.

What does this mean for you, the consumer? Part of the settlement includes a refund; anyone who purchased an eBook between April, 1, 2010 and May 21, 2012 will receive compensation. Mediabistro, a website that publishes blogs for journalists, estimates that this refund will be between $0.30 and $1.32 per eBook.

For the industry, this court case has thrown a wrench in the gears of traditional publishing. Amazon has reaped the benefits of this anti-trust scandal. Publisher’s Weekly, a trade magazine for publishers, calls the lawsuit a ‘big win’ for Amazon, because it has  more freedom pricing Kindle books.”

The beneficial outcome of the lawsuit for Amazon makes the court case controversial for some critics. “The fact that competing publishers come together and agree on the ‘agency model,’ in place of the wholesale model, does smell like collusion,” says Zhang, “However, it is not clear to me if consumers are not better off in the long run under the ‘agency model’ advocated by Apple and publishers, even if Amazon could never achieve the kind of monopoly power as feared by publishers. For that reason, we [should] watch this legal fight with great interest.”

In order to combat Amazon’s eBook dominance, some publishing houses have decided to combine forces — but legally this time — through a strategy that involves merger and acquisition. On October 22, Penguin and Random House announced plans to merge into a company to be called  Penguin Random House. “The merger will create the largest consumer book publisher in the world, with a global market share of more than 25%,” reports The New York Times. Also, paidContent reported preliminary merger talks between Simon & Schuster and HarperCollins in November.

Other markets will also be affected by the outcome of this court ruling. “If Apple and publishers lose the case, I can imagine that Apple’s agency model for iPhone apps could also be called into question,” suggests Zhang, “In addition, publishers will further consolidate, which will affect the quality and variety of publications, and there will be more self-publications as promoted by Amazon.” Not only will publishing be flipped on its head, but also pricing of all products across digital devices will be called into question.

In this increasingly technological world, publishing houses may have no choice but to adapt or die. “There is no question that eBooks are here to stay,” notes Zhang. “Publishing houses can either ride on the new technology, exploring its potential for combining sound, video and social networks to make reading and learning more enjoyable and fun, or be swept away by the new technology. It is always painful to see a familiar business model go away, but the publishing industry has no choice. The key here is for publishers to focus on high-quality content like the movie industry.” The only way to make a profit in bookselling will likely be to incorporate digital. At the same time, with already-powerful publishers merging, how will smaller, independent publishers even begin to compete? The traditional publishing landscape is shifting dramatically.

Who are the ‘Agency Five’ and why did these companies team up with Apple?

What are anti-trust laws and how do they relate specifically to the lawsuit involving Apple and the Agency Five?

How does Amazon.com stand to benefit from the lawsuit?

What does all of this mean for the traditional publishing industry?

25 comments on “A Year in Publishing: Secret Meetings and the Powerful Threat of Digital”