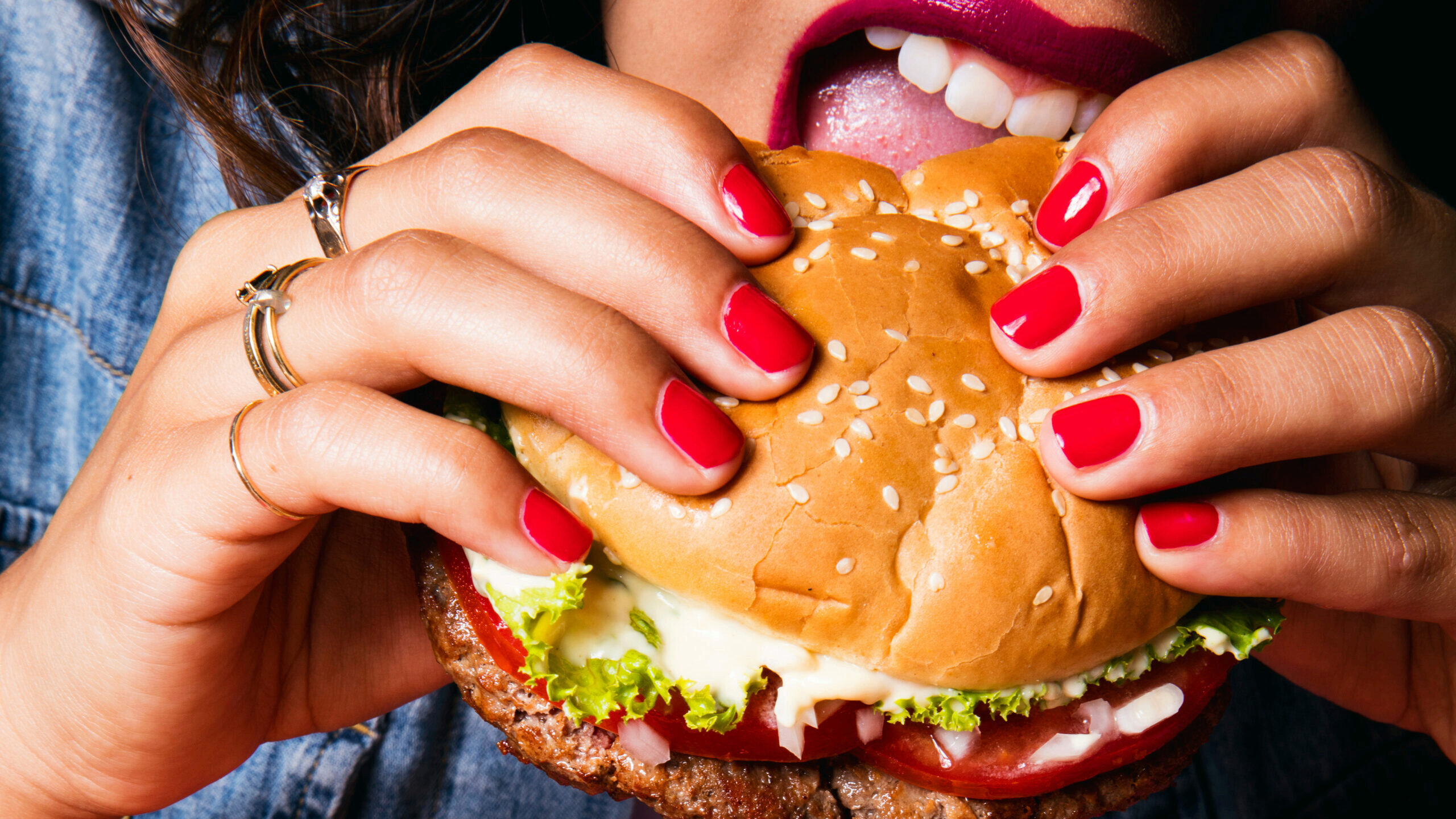 Have you heard of the Impossible Burger? As you can see from the photo, it looks (and many say tastes) a lot like your favorite fast-food beef patty with all the fixin’s, but it’s actually very different. Offered on a handful of menus in the U.S.– at restaurants like Public House in San Francisco, Bareburger in New York City, and Crossroads Kitchen in Los Angeles – the Impossible Burger bills itself as the “game changer of a burger” that is 0% cow. That’s right, it’s made from plants, not animals.

Nick Halla is one of the architects behind the Impossible Burger and, more broadly, the emerging plant-based food movement. Halla, who grew up on a dairy farm, studied engineering at the University of Minnesota, and earned graduate degrees in business and energy and environmental science at Stanford, was the first employee of Impossible Foods in Redwood City, Calif. He is now chief strategy officer. Under the guidance of CEO and founder Patrick Brown, a biochemist and professor emeritus at Stanford’s School of Medicine, Impossible Foods is on a mission to research and understand the fundamentals of the properties that drive products like meat, fish and dairy. From there, the company finds pieces in the plant-based world to help recreate those foods.

“If we take the food approach to solving this problem, we would end up with a better veggie burger, which is not going to get us to where we need to be,” says Halla, who realized while studying renewable energy sources like solar and wind power in grad school that he could have a much greater impact on the sustainability of the planet through food. “The first 50 employees at Impossible Foods were almost all scientists and researchers looking at what makes meat, fish and dairy what they are. By really understanding the science of what happens, you can make simple solutions in the end.”

Solutions like the Impossible Burger. Impossible Foods’ first product for consumers, the Impossible Burger has a few key ingredients like coconut oil and potato protein – nothing artificial. The company just announced that it is in mid-construction of its first production facility in Oakland, Calif., which will soon make the Impossible Burger available in more than 1,000 restaurants in the U.S., up from its current 11. Word on the street is that the company has even been talking with McDonald’s as a potential seller of the plant-based burger. Impossible Foods’ growth, as well as similar news from competitors like Los Angeles-based Beyond Meat, suggests that innovation to make the foods we eat and love even better has only just begun.

KWHS interviewer Julia Drake, a junior at Hopewell Valley Central High School in Pennington, N.J., sat down with Halla during a recent trip to Silicon Valley to learn more about the science and passion behind plant-based foods. Be sure to listen to that podcast at the top of this article!

An edited version of the podcast transcript appears below.

Knowledge@Wharton High School: Hi. I’m Julia Drake with KWHS, and I’m happy to be here in Redwood City, California, speaking with Nick Halla, chief strategy officer of Impossible Foods, the creator of the Impossible Burger. Nick, thank you for joining us.

Nick Halla: Thank you for having me.

KWHS: So, can you share with us the history and the purpose of Impossible Foods? What is the company all about?

Halla: We started six years ago, in 2011, really looking at the food system and trying to find a better way to produce the foods that we love today. If we look at how much — how big an environmental impact that there is behind our food system today, and behind the way we use animals as a technology to produce food, if we want to keep eating the meats, dairies, and fish products we love, we have to produce them a better way.

So, what we did at Impossible Foods is start looking at the fundamentals of what makes meat, fish, dairy — what they are. And then [we looked] in the plant-based world to find simple solutions for how we can recreate those experiences that we love, to make delicious products that chefs can use.

KWHS: You talk about transforming the global food system. Why do we even need to invent a better way to make the foods that we love?

Halla: Today, when we look at animals as a food production system, 1,000 years ago, it made a lot of sense. But as we’ve added more and more people onto the planet, the impact behind that system has become very, very large. So today, more than 30% of the world’s land surface is dedicated to animal farming. More than 25% of all fresh water is used for that. And it’s more greenhouse gases than all transportation combined. And when the UN Food and Agriculture Organization predicts that [consumption] is going to increase 70% by 2050, it just doesn’t work to use the same system we do today, to help feed people delicious foods that they love.

But if we look at it from a technology standpoint, what cows are great at doing is producing foods that people like. But they’re very inefficient. So, for every 33 grams of protein that go into a beef cow, we consume one out, in meat. And so if we go to the plants, we can take a 3% efficient technology and make it much better. And we could feed the world in 2050 with a tiny fraction of the environmental impact we have.

KWHS: I have to admit, I’ve never actually tried an Impossible Burger.

Halla: Well, we’ll have to make that change soon.

KWHS: Yes. Though I’ve heard it tastes like the real thing. What is involved in the process of creating a new product like that?

Halla: We spent the first two years developing a new platform for how to make food. Our founder, Dr. Patrick Brown, from Stanford, had spent 25 years as a medical researcher. And we applied a lot of the things that he had done in research, for how to really look at food. We’ll take an example for the Impossible Burger — that you’ll definitely need to go try soon.

We looked at what gives [beef] the properties that it has. Why is all that flavor generated when you put it on the grill? Why does it turn from something soft and malleable you can make into tartare, a meatball, or a burger, and then change properties as it cooks? And when we understood those fundamentals, then we looked in the plant-based world and how to recreate and pick those pieces out.

So, we built a team within the first two years, about 50 scientists, really looking into this problem. And an example of how this works is, when we started looking at flavor and aroma, we learned that there’s one protein that drives almost all the flavor of meat. Whether you’re chicken, pork, or beef. And it’s a protein called myoglobin, and it’s a heme protein. And heme is in plants, animals, and really in any part of life.

KWHS: What are your responsibilities as chief strategy officer?

Halla: So, as you can imagine, as a small team over the last six years that we’ve been growing, it’s been pretty much anything and everything over time. As we’ve grown now, we want to focus a lot on what our big mission is. That this industry is massive, and people want more and more food, as middle classes rise and the population continues to grow. So, a lot of my role is focused on, from a strategy standpoint, how can we accelerate delivering more and more products to people here in the U.S., worldwide? What are the next products? And how do we really build the business to have the impact worldwide that we want to?

KWHS: Where do you think the plant-based food movement is headed in the future?

We’re in San Francisco right now. Five years ago, there was very little talk about what we could do from an innovation standpoint in food. In my background, I grew up on a dairy farm. I worked at General Mills, designing new products and manufacturing systems. And what I saw in those industries was really slow-moving.

When I came out to San Francisco, I was looking to get into energy, because renewables [like solar and wind energy] were where things were happening. But now, people around the world are realizing that there’s so much opportunity for food to become much better, from an affordability standpoint, nutritional standpoint, health, and really even the properties of what we love. And so, I think there’s going to be more and more innovation going into food. And the opportunities and options for consumers, and what they can actually purchase in restaurants and grocery stores, and even directly to their home, is going to multiply very quickly.

Why do we even need innovation in places like Silicon Valley to rethink and redesign our global food system?

The science of food is Impossible Foods’ core mission. How does its approach differ from another company that might add preservatives to extend the shelf life of a product? Isn’t that also a scientific solution?

Have you eaten an impossible burger? If not, would you? Why or why not? Debate in a group the benefits and challenges of the plant-based food movement. Is it possible to create a food system that is full of taste as well as environmental benefits? Post some of your thoughts in the comments section of this article. Impossible Foods would love to hear your ideas!