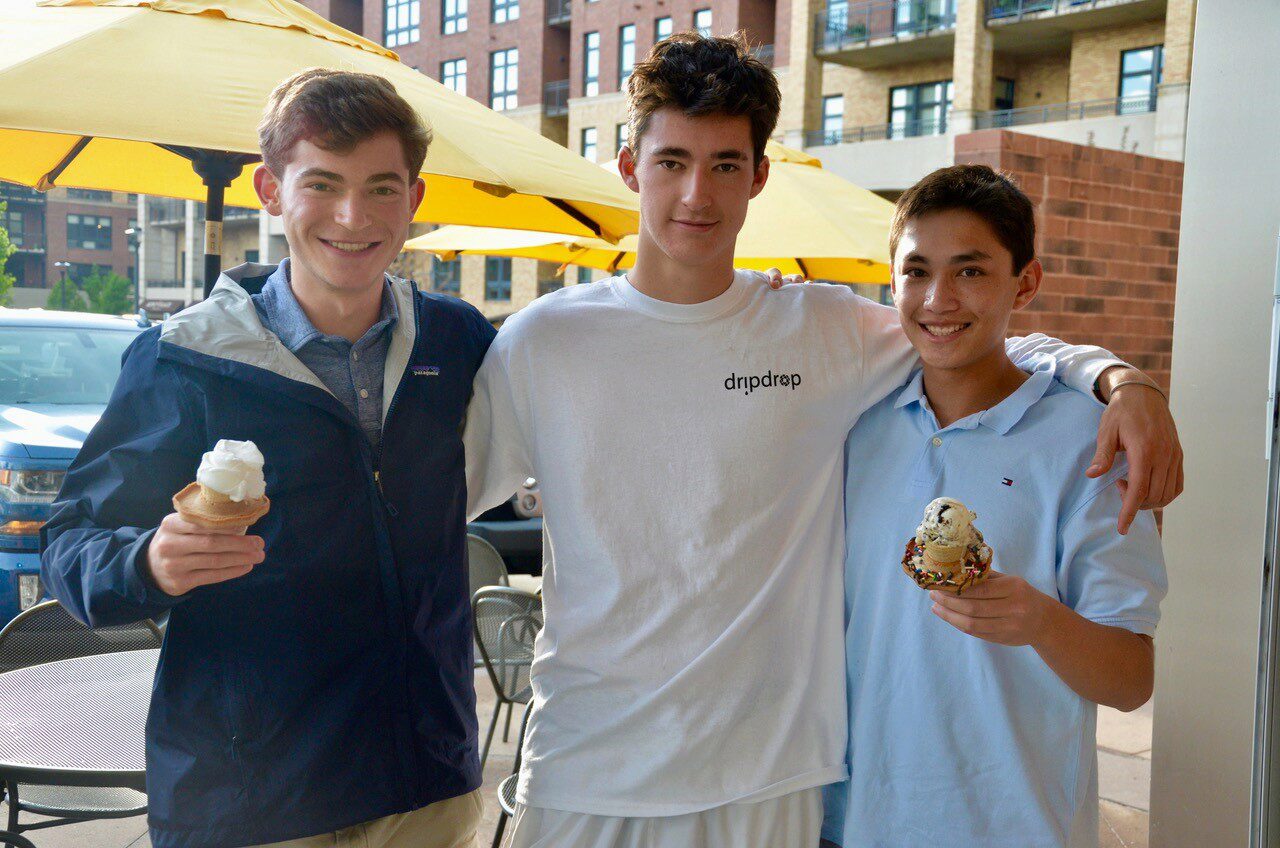 Emilee Rysticken’s social media tells a unique story. In early June, she was posing in cap and gown, gushing about her graduation from Two Rivers High School in Two Rivers, Wisconsin, U.S. By June 30, mere weeks after opening her ice cream business, Scream’n Conuts (with cones made from donuts), she posted this: “Attention! Tomorrow, June 30th Scream’n Conuts will be closed. We had ordered 50 three-gallon tubs of ice cream for the week and sold out of ALL of it. We are extremely sorry and will be back in stock and back to normal hours on Tuesday. Thank you.”

For Rysticken, it was a precious lesson in one of retail’s most essential practices: effective inventory management. “There’s a lot you can’t predict. I never really fathomed that I would go through that much ice cream in a single week,” says Rysticken, who started out in June ordering 43 gallon tubs of ice cream a week and is now ordering 73. “When I first opened, I was definitely understaffed and I didn’t have enough storage for my ice cream. I’ve learned so much since opening this business. Mistakes are not the end of the world. It’s what you do with them and what you learn.”

Lots of people north of the equator are beating the heat these days by treating themselves to a few scoops. According to the International Dairy Foods Association (IDFA), July is the busiest month for ice cream makers, though that’s really just the tip of the sundae. About 1.4 billion gallons of ice cream and related frozen yogurts were produced in the U.S. in 2017, in an $11 billion industry that supports 26,000 direct jobs and generates $1.6 billion in direct wages. Good news for Rysticken: ice cream makers and retailers say that the Great Lakes Region in the U.S., including Wisconsin, is the most successful ice cream market.

With lines snaking out the parlor doors, we checked in with a few young ice cream entrepreneurs from across the U.S. who got a taste of the market – and reality — this summer and were willing to share some start-up struggles.

Meeting the demand has been a high priority. After all, the IDFA reports that the average American consumes more than 23 pounds of ice cream per year.

Sam Nassif embraced that opportunity from the cone up. Nassif, 18 and a recent graduate of Kent Denver High School in Englewood, Colorado, U.S., is the co-creator of the Drip Drop, a patented product that he has worked on since he was 10 years old. The Drip Drop is an edible ring made out of waffle cone ingredients that slides onto cones and prevents melting ice cream from getting all over hands and clothes. You may have seen Nassif and his then-partner, Oliver Greenwald, at age 15 when they appeared on the popular entrepreneurship TV show Shark Tank. They won a deal that day with shark Barbara Corcoran, but she ultimately didn’t end up investing in their company.

“Having enough capital has been my biggest adversity as a new business owner.” — Beau Shell, Cool World Ice Cream Shop

Shark Tank elevated Drip Drop’s profile and led to a successful online Kickstarter campaign for the company last summer, which raised $7,047 from 82 backers. It was this summer, though, that the cone came into its own. Nassif, who now leads the company since Greenwald stepped away several months ago, negotiated to get Drip Drops into all three Denver-area locations of Glacier Ice Cream & Gelato, a legit opportunity to test the market for his cone creation. Then, the real work began.

“I made a lot of Drip Drops this summer,” says Nassif, who was headed this week to Chapman University in California to start his freshman year studying entrepreneurship and business. “At the beginning of the summer, I had a few of my friends interning for me to help me out and make them. I took over and was making the batter in the commercial kitchen. It was a lot of work. We ended up selling 1,500 Drip Drops in a little over a month. That was awesome for us. It gave us a chance to test the product and see that it was selling.”

Nassif will use his hours of hands-on production and sales, he hopes, to launch the Drip Drop to its next stage of development and to solve an ongoing challenge: mass production and distribution. “We’ve been contacted by Joy Cone, the No. 1 cone manufacturer in the world,” says Nassif, who adds that his Shark Tank appearance generated hundreds of emails from shop owners worldwide interested in selling his product. “Now that the Drip Drop sold well, we’re planning to set up a call with Joy in the next week or so. We hope to have a partnership or a licensing deal by the end of the summer.”

In Athens, Georgia, the deep U.S. South where summer temps regularly top 95 degrees Celsius, Beau Shell has had, well, a pretty cool few months. On June 9, Shell, a 10th grader at Cedars Shoals High School, celebrated his 15th birthday by opening the Cool World Ice Cream Shop. Known to many as the Li’l Ice Cream Dude, Shell has been operating a mobile ice cream cart and catering events since 2012. Setting up his first storefront was the fulfillment of a dream. In 2017, he started and completed a successful Kickstarter campaign, raising $21,625 from 355 backers, money he used to get Cool World up and running.

“I’m definitely excited and I’m happy we took the step to open the shop,” says Shell, who has worked hundreds of catering events and generated hundreds of thousands of dollars in revenue since getting into the ice cream business seven years ago. His entrepreneurship journey has also included speaking at high-profile events like the U.S. Chamber of Commerce’s Small Business Series in Atlanta, Ga., and publishing the first of a series of children’s books, The Coolest Birthday Ever, that chronicles his adventures in the ice cream business. “We’re getting more customers in the shop and the word is spreading very well. I’m really grateful to my community.”

And yet, the Li’l Ice Cream Dude admits that the past few years of business growth have also come with challenges. “There were a lot of things we didn’t know and had to learn,” says Shell, who plays percussion in his high school band. “When we did the Kickstarter fundraiser, we didn’t know if it was enough. We found out the hard way that it was way too little money for what we needed to do. The costs were way higher than we expected. Having enough capital and that resource of money has been my biggest adversity as a new business owner. We need the cash flow to pay employees, to get the supplies of ice cream, to have enough money each month to pay rent and other expenses.”

Shell is looking to his mobile ice cream catering gigs and other business endeavors to help fuel the financial demands of owning a shop, which has also required a sharper focus on human resources. “We want to make sure we get a reliable and trustworthy staff that can be here when we want to go back to mobile,” he notes. “A lot of times, we have to choose between the shop and mobile.” The Cool World Ice Cream Shop now has four paid employees, including three teens in their first jobs and “Mr. Bennie,” a 70-year-old who is “retired, but not tired.”

Inventory, production and distribution, cash flow – these are all real business skills that entrepreneurs of any age must master. And while this enterprising group of teen ice cream innovators may have forged ahead with minimal training, Tyler Wry, a Wharton associate professor of management, suggests that they are not necessarily renegades. “Having business training is great in terms of understanding the nuts and bolts of running a business. Basic accounting, finance, and operations insights will really help with daily operations,” says Wry. “That said, most ventures have a great deal of uncertainty (i.e., they are unpredictable), and this means that learning as you go is not only par for the course, but also really, really important for entrepreneurial success. It is something to be embraced!”

Wry has additional insight for entrepreneurs like Rysticken, Nassif and Shell who are entering new markets and just getting their footing:

Wry also encourages new entrepreneurs to be open and attentive to learning opportunities. “Like most people, entrepreneurs tend to have some cognitive biases that make them reluctant to learn and adapt… they fall in love with their ideas; they discount disconfirming feedback; they see what they want to see. It’s important to have clear goals, and gather data to see if the goals are being achieved or not.”

Rysticken, an academic star in high school who has chosen to forgo four-year college to launch Scream’n Conuts (she is also a certified welder), has learned the power of community and accepting outside expertise. “Going into business, nobody knows everything. You have to keep an open mind and realize you don’t know it all,” she says. “Always use your resources. No one can do it alone. If I was completely on my own doing this, I would have 100% failed. It was the fellow business owners in my city and groups like Bizstarts in Milwaukee that helped me so much. Keep your ears open for all that other people can teach you.”

What is a pain point? Identify some of the pain points mentioned by these ice cream entrepreneurs. How are they addressing them?

What does professor Tyler Wry mean when he says, “Like most people, entrepreneurs tend to have some cognitive biases that make them reluctant to learn and adapt.”?

Two out of these three entrepreneurs raised money through Kickstarter. What is crowdfunding and how does it work? Do you have any personal experience with it? Share your story in the comment section of this article.

22 comments on “Wisdom from the Parlor: Ice Cream Entrepreneurs Share Their Struggles”