Shoppers with a mobile wallet app can start using their smartphones to make payments at any store that uses a near-field communication reader available at checkout. Lots of companies, from Google to startup Venmo have entered the mobile wallet market, and yet consumers are slow to adopt this new payment method. What’s behind the lack of popularity? Will mobile wallets ever become the norm? This Knowledge@Wharton article – with KWHS commentary from young Silicon Valley tech whiz Daniel Brusilovsky – explores these questions and more. …Read More 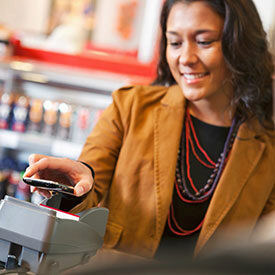 The versatile smartphone has become indispensable to the average consumer. It is a music player, alarm clock, game console, GPS navigation device and even a TV screen, in addition to being a cell phone. But one thing it struggles to be is a wallet.

That is not for lack of trying. Three years ago, Google introduced Google Wallet, a mobile app that lets consumers transfer money, redeem coupons or pay for purchases with a tap of their smartphones. Consumers can also store their credit, debit and retail loyalty cards as well as other information in the app. Last year, AT&T, Verizon Wireless and T-Mobile launched a mobile wallet called Isis (whose name is being changed to avoid confusion with the militant group). In the same year, PayPal rolled out a digital wallet. Amazon is testing Amazon Wallet now, and Apple is rumored to be introducing one as part of iPhone 6 this fall. Throw in startups like Venmo, LevelUp and Loop, and you have a crowded marketplace vying for users. Of course, merchants must also have a special technology known as a near-field communication reader available at checkout for mobile wallets to work.

But despite their promise of convenience and ease of use, mobile wallets are far from popular. According to a study by mobile research firm Yankee Group released this year, a mere 16% of consumers used their phones to make an in-store purchase between December 2013 and February 2014. Among these buyers, 73% made fewer than five purchases a month. Such low rates of adoption have already killed off the Square Wallet, a mobile app that was introduced in 2011. “Clearly, the way we pay for goods and services is not slated to change anytime soon,” the study concludes. However, the report notes that consumer interest is high: Two-thirds of those surveyed said they were interested in learning more about switching to a mobile wallet.

Teens, while tech-savvy, are not necessarily racing to the mobile wallet market, says Daniel Brusilovsky, a technology expert from San Mateo, Calif., who has founded and worked with several startups since his early teens.

Now 21, Brusilovsky’s most recent endeavor, which he left in April, is Ribbon, a money transfer startup. “I got my first credit card when I was 16, and it was tied to my parent’s account,” notes Brusilovsky, who at 15 also started Teens in Tech, a social network and conference to encourage young entrepreneurs in the technology space. He shut that business down in April to accept his dream job as the digital initiatives lead for California’s Golden State Warriors American professional basketball team. “Young [people] don’t have a payment source to tie into a mobile wallet. I don’t think parents want their kids to have the ability to pay for anything at any point. It comes with its own risks. That’s the downside and why it’s not really being used [by teens].” Google does offer the Purchace Mobile Wallet for teens, which provides money management tools and turns the smartphone into a secure payment platform. Most companies, however, are not creating mobile wallet solutions for the teen market.

Studies also suggest that consumers young and old are less likely to use mobile wallets because they are worried about related security and privacy issues. In a comprehensive article about the mobile wallet market published in Knowledge@Wharton this month (see Related Links below), Wharton marketing professor David Reibstein notes that consumers had similar privacy concerns when credit cards were first introduced. “There were some that were paranoid and upset about the loss of privacy,” he says. Today, “we don’t even think about American Express or Visa knowing what we are buying. There will be concern, but it will dissipate, unless it is abused.”

Reibstein points out that throughout history, consumers have greeted shifts to new payment systems with skepticism and fear, from the checkbook to credit cards. “There’s just paranoia to things that are new,” he says. But once the benefits of using the new system become compelling, and consumer protections catch up, people will make the leap, he predicts. “I think 10 years from now, we’ll look back at it and say, ‘Hasn’t this always been here?’”

Wharton marketing professor John Zhang shares Reibstein’s view that the widespread use of mobile payments is inevitable. Consumers take their smartphones everywhere, and one-tap purchases are quite convenient. “To that extent, surely this technology is here to stay,” he says. Zhang adds that mobile payments are particularly popular among the youth, who are tomorrow’s big purchasers – not necessarily 16-year-olds, but those older millennials (between 18 and 35) who have more financial freedom. Retailers would ignore this group to their peril. “If you don’t [accept mobile payments], you’re going to be passé. You’re going to lose lots of your [future] customers.”

Millennials are taking to mobile wallets like Venmo as easily as they have adopted Facebook and Instagram as part of their daily routine. Venmo allows you to use your smartphone to exchange payments with people in your social circles. “In fact, you can combine mobile payments with social networks,” Zhang notes. A popular use of mobile wallets is the transfer of funds between friends — to pay them back for dinner, get a loan in a pinch or bail out someone short of cash at a store. “It’s much easier for you to borrow money [this way] and much harder to forget to pay someone back,” he says. “It definitely improves the efficiency.”

As proof that mobile payments and wallets will stick, Zhang points to higher rates of adoption worldwide. “The mobile payment business in America is playing catch-up,” he says. “If you look at Japan and South Korea, [mobile wallets] are definitely more widely used. Even in China, the mobile payment is actually a pretty big deal.”

Among the few U.S. retailers making major inroads in mobile wallets is Starbucks. Earlier this year, the coffee retailer revamped its mobile wallet for iOS devices to add more features such as tipping your favorite barista or “shake to pay,” where shaking the phone brings up the barcode of a consumer’s Starbucks card to make the purchase. The wallet stores gift cards and rewards frequent purchases. In an earnings conference call for the quarter ended June 29, Starbucks CEO Howard Schultz said mobile payments now account for 15% of all U.S. transactions for the firm.

The Power of a Single System

Brusilovsky, who knows his way around the app landscape, is hopeful that mobile wallets for the typical consumer will become a reality, but much of it depends on technological upgrades. “I would love to have a mobile wallet that has every one of my gift cards and every one of my loyalty cards, my American Airlines number or my Virgin Airways number. I want a single place where I can get every number from credit card, to loyalty to gift card,” he says. “But there also needs to be a standardized system to get payment across from a phone to a point of sale (POS) system [used by retailers]. Most POS systems in the U.S. are outdated and don’t support this technology. Consumers don’t know which mobile wallet to use because they don’t know which merchant will accept it. We need something that will work across both old and new POS systems and that will work across all mobile devices and operating systems.”

Could we see a day where one company can negotiate with every major brand in the world and say, ‘This is going to be the system for you to accept money?’ A single solution would be immensely powerful, says Brusilovsky. “There is only one company that has that capability, and it’s Apple. Google has tried doing that with merchants, but the reality is that it didn’t work well for them. Apple has this incredible opportunity with 800 million devices to be able to pay with a mobile device: a tablet, an iPod, a computer.”

But this centralized approach probably won’t happen anytime soon, he adds. “There’s too much competition between Apple and Google for them to agree on a synchronized system for mobile. There’s too much competition in the POS system for them to agree on a single solution to implement, as well. Will it happen? Maybe. Will it happen sooner rather than later? Probably not.”

Zhang agrees it will take years before mobile wallets will become the predominant way to pay. People are so used to purchasing with physical credit and debit cards that it would be hard to change their ingrained habits. Both virtual and physical wallets will probably co-exist for a while, he predicts. Last year, Google introduced a physical debit card tied to a Google Wallet account. In the meantime, merchants could prepare for the transition by installing systems to accommodate both methods of payment.

Reibstein compares mobile wallets to electronic speed passes on toll roads. Cars used to wait in line to pay a toll collector, but now they just zip through lanes with hardly a thought or any cash exchanged. In the same way, shoppers will someday speed through checkout lanes with a wave of their virtual wallet. “The advantage to consumers is that they get in and get out quickly,” he says. “Who doesn’t prefer that?”

Do you think we will be using mobile wallets in 10 years? Why or why not?

Do you use a mobile wallet? If so, which app? Specifically, what are some of the ways you use it regularly? Have you ever used Venmo or other startups? Share your mobile wallet insight with us on Facebook at https://www.facebook.com/whartonhs.

Consumers crave choice. But in this case, is too much choice an asset or a weakness? Why or why not?

What Is Disrupting the Food Supply Chain?