Miley Cyrus may not like Urban Outfitters, but, according to CEO Glen T. Senk, the retailer’s culture embraces diversity as a smart business strategy. During a recent talk, Senk discussed this and other insights about the Philadelphia-based company, as well as the importance of being open to learning every day.…Read More 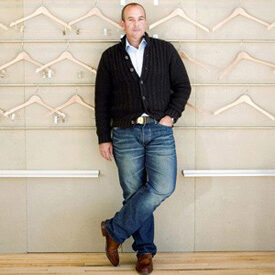 Retailer Urban Outfitters has recently sparked debate in the social media for more than its hipster culture. In late May, a jewelry design controversy pitting an independent artist against the company (Urban Outfitters has denied any wrongdoing) led to tweets by singer and starlet Miley Cyrus, previously of “Hannah Montana” fame, blasting Urban Outfitters for founder Richard Hayne’s support of Rick Santorum, a Pennsylvania senator who has spoken against gay equality.

What is Urban Outfitters all about from the perspective of the guy who runs the company? Glen T. Senk, the CEO of the Philadelphia-based business, spoke at a Wharton Leadership Lecture this spring (before the tweets started flying). Senk offered a behind-the-scenes look at the retail business’s culture, as well as his own career, and why he considers Hayne a mentor.

Senk’s journey with Urban Outfitters, where he started working in 1994 and took over as CEO in 2007, is all about leading what he calls an “authentic” life. He believes in pursuing a career for the sheer enjoyment of the work, rather than for the money. The wisdom of that viewpoint became apparent to Senk in 1989, when he successfully battled cancer. “You realize you have to take responsibility for doing what is right for you,” Senk noted. “You have to live a life you want to lead.” Senk added that following that path has paid huge dividends. “A lot of my friends who went on to be very successful in investment banking or law or consulting … are not as happy as I am. There is not a day that I don’t wake up bounding out of bed and can’t wait to get to work.”

The payoff to Senk’s formula is evidenced by Urban Outfitters’ rapid expansion. Over the last 10 years, the company’s operating income has grown by 36% annually as the firm built a large stable of successful brands — the core Urban Outfitters line aimed at women 18 to 30 years old; Anthropologie, a clothing and accessories retailer focused on women ages 28 to 45; Free People, a fashion-forward line of clothing and retail stores focused on women in their 20s; the Scandinavian-inspired modern apparel and footwear brand Liefsdoittir, previously sold at upscale department stores but now exclusively at Anthropologie stores, and new efforts in the garden and bridal arenas.

From the Concorde to Main Street
Senk’s career at Urban Outfitters was almost a nonstarter. In the early 1990s, he left a position as senior vice president and general merchandise manager at kitchenware and home goods retailer Williams-Sonoma and decided to start his own business. While raising money for that venture, he met Urban Outfitters founder Hayne. When Hayne tried to entice Senk to join his company, Senk initially took a pass. Instead, Hayne agreed to help bankroll Senk’s as yet undefined new venture. “I was terrible at raising money,” Senk noted with a laugh. But Hayne ultimately became a mentor to Senk, and when Senk decided to return the money he had raised to investors, he took Hayne up on his job offer. He started out running one store, the Anthropologie prototype outlet.
“I went from supervising 200 people, having two assistants and flying on the Concorde [at Williams-Sonoma] to running one store that did less than $1 million,” Senk said. “I had a vision for myself and what it could be. And I believed so strongly in the culture [Hayne] had created at Urban.”

Senk described that culture as one where creative, collaborative and curious people are given the freedom to operate almost like entrepreneurs. Diversity — including diversity of race, religion and political views — is also central to that vision. “Dick Hayne is a Republican,” Senk noted. “I’m the first openly gay CEO of a Fortune 1,000 company.” While Senk and Hayne may differ politically, Senk considers such disparity of opinion to be an advantage. “We believe as a company in hiring diversity, not because it is politically correct, but because diversity makes us stronger. I look for people who complement me, not [people] who look at the world the same way that I do.”

‘Six to Eight Brands Doing $500 Million Plus’
Looking forward, Senk sees tremendous opportunity for Urban Outfitters. While he thinks the Urban Outfitters and Anthropologie lines have enough penetration in the North American market, Senk expects more expansion for those chains overseas. He also predicts that some of the company’s newer brands, including Terrain for outdoor living and BHLDN for the bridal market, could become major presences. “Our goal is to do $10 billion in sales by 2020,” Senk noted. “My guess is we’ll have six to eight brands that are doing $500 million plus [in sales].”

Senk is also excited about how technology will revolutionize, not only e-commerce, but also the operation of bricks-and-mortar stores. Currently, the company is piloting a new mobile point of sale system in 21 stores, which allows customers to make purchases in places other than the cash register. Senk envisions a future where stores get rid of cash registers entirely and use mobile devices to make shopping a more personal experience for consumers.

For all his success, Senk gives a lot of thought to his own weaknesses. “I have seen ego destroy so many people in many businesses,” he noted. “You have to be humble and open to learning every day.” Part of that, he argued, is being patient. “Thank you, Dick Hayne, for mentoring me for 14 years, so that when I became CEO, it was seamless. But thank you to me for being mentored for 14 years. I could have taken a CEO position at many other companies, but I was patient.”

2 comments on “Behind the Scenes at Urban Outfitters”

From the Campus Quad to the Boardroom: Jason Schutzbank on Life as a Student and Serial Entrepreneur