Move over Ironman. These days, teens -- especially those inclined to software development -- consider techie entrepreneurs like Mark Zuckerberg to be their superheroes. Tech watchers in Silicon Valley and beyond are finding ways to support and nurture these young web innovators in hopes of discovering and growing the next great high-tech startups. …Read More 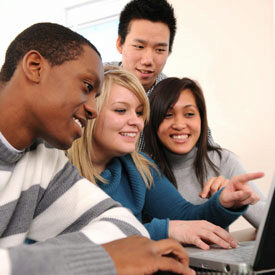 Please don’t tell Daniel Brusilovsky his business idea is cute. “If I wanted to be cute, I wouldn’t be sitting in your office, taking a cab from the train station,” Brusilovsky says. “I am real. I have an idea that’s truly unique and potentially something big.”

That something big was an idea for connecting teenage entrepreneurs to mentors through a business and tech incubator — one that Brusilovsky, an 18-year-old from San Mateo, Calif., is putting into action through the Teens in Tech Labs Incubator. The company started as a social network for young media producers, an online-based way for technical entrepreneurs to connect with one another. It eventually turned into a one-day conference. “That was just a one-day event,” Brusilovsky says. “Imagine if we had more than one day to build entrepreneurship. And that’s where the idea of the incubator came from.”

An incubator is a business program aimed at developing an entrepreneurial concept into a company through mentorship and continued support. Start-up companies graduate from incubators after at least one to three years in hopes of continuing to grow on their own.

This summer, five teens from across the country will fly to Silicon Valley, armed with their unique tech ideas, and connect with more than 50 mentors for a hands-on program that will help turn their ideas into reality. Brusilovsky, who is keeping the names of the five teens and their ideas under wraps, plans to unveil the projects during a demo day in early August. The potential startups include two mobile applications, a social-based web application, a developer tool and an education application. “All have one overlapping category — all are young entrepreneurs who want to learn as much as possible,” Brusilovsky notes. “We’re not looking for billion-dollars ideas, we’re looking for billion-dollar people. Because we know the people can build a billion-dollar idea.”

Brusilovsky’s move toward teen tech entrepreneur mentorship is a trendy one, especially as high school students like Cyrus Pishevar, a 13-year-old from Palo Alto who developed the successful Facebook App High School Memories, show their strength as web innovators. In September, for example, Facebook investor Peter Thiel pledged to make 20 grants of as much as $100,000 apiece to teenagers with startup ideas. “We need to encourage young Americans to take more risks,” said Thiel, who co-founded PayPal Inc.

Brusilovsky is a risk taker from way back. A guy who “doesn’t feel right” if he’s not doing two or three things at once, Brusilovsky not only runs the Teens in Tech Incubator, but also attends college classes in Silicon Valley and works for a creative agency in Washington, D.C. He has also been a marketing evangelist for Qik, a video-casting service that was eventually bought by Skype. He began launching startups at a young age and says that even though some venture capitalists described him as  “cute,” youth can sometimes be a great advantage. “You’re young, you live at home and you don’t have to pay mortgage and bills,” Brusilovsky says. “There’s only a [short] time in your life where you don’t have to worry about that.”

The ‘Funny Language’ of Entrepreneurship

According to Shonika Proctor, who runs Renegade CEOs, a blog for young entrepreneurs, “It’s not the limits of society, it’s the limits of oneself,” that can interfere with launching young entrepreneurs. An entrepreneur herself, Proctor started young and made enough money from selling a cell phone business to now work as a volunteer mentoring the next generation of business owners. Her recent blog posts suggest she is truly tapped into the young entrepreneur circuit: “Brian Wong, 19, Raises $4 Million VC [Venture Capital] for Kiip,” “Grace Li, 15, 100K Letters to Japan & New Huff Post Column,” and “3 Young Entrepreneurs Selected for Start Up Chile.”

“Most people who are entrepreneurs don’t say they want to start a business. They say, ‘I want to invent something or I want to help something,’” says Proctor. Mentors can especially help young entrepreneurs through the process. Proctor, 38, remembers a student who wanted to start a business but felt daunted. “He said, ‘To me it’s like the SAT; they use all this funny language.’”

Young entrepreneurs interested in exploring their ideas and their markets can find a number of online resources. Brusilovsky recommends what many consider time wasters: YouTube, Facebook and Twitter. He used YouTube videos to learn how to code, and networked using Facebook and Twitter, finding other entrepreneurs as well as potential investors. “They were blocking Twitter at school,” Brusilovsky recalls, “but what are you going to gain from that? Sure, people watch silly cat movies, but a lot of people spend time learning things.”

Brusilovsky’s Teens in Tech presentation will be held at the Palo Alto Research Center, which he calls the “birthplace of technology life.” As members of the next generation of technical entrepreneurs present their ideas to the world, they will ruminate on those who came before them — inventors of the fax machine, the mouse and the Ethernet, Brusilovsky says. “We’re bringing the future and history of technology together.”

Career Insight: Nick Halla on the Culture Inside a Silicon Valley Startup