When was the last time you dunked an Oreo cookie? Chances are, it wasn’t too long ago. Teens have been downing packages of those yummy chocolate wafers with cream-filled centers for 100 years this week. In this Knowledge@Wharton Today blog, experts weigh in on Oreo’s enduring twist, lick and dunk legacy. …Read More 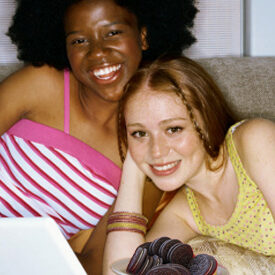 The same year the Titanic sank and a second party of explorers reached the South Pole, a grocer in Hoboken, N.J., spent 30¢ a pound on tin packages of a new cream-filled chocolate sandwich cookie known as the Oreo.

That first sale, made on March 6, 1912, marked the beginning of what would become a cultural icon — and touched off a century-old debate about the best way to eat them: Whole? Cream center first? Or dunked in a glass of milk? As Catharine L. from Belmont, Mass. writes in an essay published in the magazine, Teen Ink: “There’s something inherently magical about Oreos. Everyone has a fond memory somewhere of coming home from grade school and finding a plate of Oreos with a tall glass of icy cold milk.”

According to Kraft, which bought the Nabisco brand in 2000, about 25 billion Oreos are eaten annually – 70 million per day – resulting in $2 billion in global sales in 2011. Oreo has 23 million Facebook fans, and even set a Guinness World Record as the first brand to attempt – and set – the record for the most “likes” on a Facebook post in 24 hours. On February 16, 2011, fans around the world tallied a total of 114,619 “likes.” The company is celebrating Oreo’s 100th anniversary in style this week, launching a worldwide marketing campaign and releasing a T.V. commercial – to run in 15 countries – featuring a series of vignettes depicting Oreo’s famous twist, lick and dunk ritual.

Oreos are truly a global passion. Cookie lovers in more than 100 countries can do the Oreo twist, including consumers in Poland, Germany and India, where the Oreo was introduced for the first time just last year.

Oreos have managed to outlast any number of food trends — and even bested the product’s closest competitor, the Hydrox, which was actually introduced first, in 1908. So what has helped the Oreo remain popular? “For a product to stay relevant, it should address a basic need that doesn’t change over time,” says Wharton marketing professor Barbara Kahn. “Also, products that are classically styled rather than fashion forward are almost by definition more likely to become iconic. For example, Burberry’s traditional raincoat is a classic style that has reached iconic status; [same for] the VW Bug.”

Although the packaging has been modified, the distinctive design of the Oreo cookie hasn’t changed much since 1912. Over the years, different countries have put their own spin on the product — a green tea ice cream variety is available in China, for example, and blueberry ice cream Oreos are sold in Indonesia. And the product line in the U.S. has expanded more than once, including the introduction of the Double Stuf Oreo in 1974 and a trademarked brand of cookies and cream ice cream in 1983. Product owner Kraft Foods is selling a limited edition “birthday cake” flavor to mark the cookie’s anniversary.

But Wharton marketing professor J. Wesley Hutchinson wonders if Oreos are part of a dying breed. “There are fewer and fewer ‘cash cow’ multigenerational products,” he notes. “Kellogg’s Corn Flakes, along with Post Grape-Nuts and General Mills’ Cheerios are the archetypes. They satisfied a basic but modern human need and use excellent brand management to maintain their positioning in a competitive market.”

Kahn also acknowledges that successfully introducing a product that appeals to a broad audience is tough in today’s crowded marketplace. “But if a product really hits the right note, it can become a classic overnight — think of Apple’s white earbuds,” she says.

As for the Oreo, Kahn thinks the “consumption traditions” that grew around it have helped the product stick around for so long. (According to Kraft, Oreo eaters are split down the middle on the issue of whether to eat the cookie whole or to pull it apart, although women “twist” more often than men.)

Hutchinson adds that one part of the Oreo’s winning strategy is pretty simple: “Have you ever had an Oreo and milk?” he asks. “‘Nuff said.”

Want to comment on this story? Answer one or more of these questions (using the article and your own insight) to start the conversation:

How has Kraft used social media to promote Oreo cookies? Do you know of other ways not mentioned in this story?

According to experts, what has helped the Oreo remain popular over the last century?

Do you think a 100-year anniversary for a product is worth lots of media coverage, like the Oreo has received, or is it just a marketing ploy?

Do you have a cool Oreo story? Maybe you wrote about Oreos in your college essay? Share it with other teens on KWHS’s Facebook page at http://www.facebook.com/whartonhs.