On Thursday, the New York City health department voted to prohibit the sale of sweetened beverages greater than 16 ounces -- including sodas, sports drinks and sweetened coffees and teas -- in restaurants, food carts, delis and concession stands at movie theaters, stadiums and arenas. This is but one measure in cities and towns around the country intended to reduce consumption of sodas and other sweetened drinks. Will bans and taxes work to curb problems like childhood obesity?…Read More 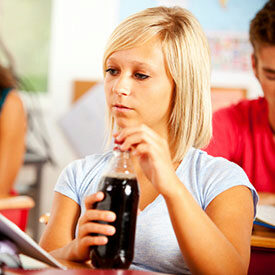 Two years ago, Spencer Pearlman, now a senior at Cooper City High School in Cooper City, Fl., participated in a 30-second TV commercial promoting healthier drinks in schools for the American Beverage Association (ABA), a nonprofit that represents the non-alcoholic, refreshment beverage industry. Pearlman has never been a big soda drinker – enjoying a weekly Sprite from his local Publix grocery store – but to him the message of the public service announcement was pretty powerful. “It centered around students and talked about all the beverage companies working together with the same goal in mind to remove full-calorie beverages from the schools and replace them with other beverages to give students better choices with [fewer] calories,” says Pearlman. “I think taking sodas out of school vending machines would have a big impact. Kids drink it because it’s easy to get.”

Not So Sweet Consequences

While the ABA’s school campaign has no doubt had an impact, many people feel it is not enough when it comes to restrictions on sugary beverages. The taste of soda may be sweet, but the potential consequences of those empty calories — obesity, diabetes, higher mortality and skyrocketing health care costs — are not. In response, many states and cities in recent years have proposed taxes or other initiatives intended to reduce consumption of sodas and other sweetened drinks.

One proposal commanding a lot of attention is New York City Mayor Michael Bloomberg’s “soda ban,” to prohibit the sale of sweetened beverages greater than 16 ounces — including sodas, sports drinks and sweetened coffees and teas — in restaurants, food carts, delis and concession stands at movie theaters, stadiums and arenas. The ban, which the city’s board of health passed on Thursday, September 13, does not apply to soda sold in supermarkets or convenience stores.

“There is a huge likelihood that the ‘soda ban’ will be the next McLean” — a healthier burger option added to the McDonald’s menu in 1991 that failed to catch on with customers, says Brian Wansink, a Cornell marketing professor and director of the school’s Food and Brand Lab. “For 10 years after [that product was introduced], fast food companies were hesitant to come out with new [health-conscious] products because they didn’t want to be the next McLean.”

The soda ban is a similar gamble, he notes, because “it’s visible, it’s controversial and if it doesn’t overwhelmingly succeed, people will look at all subsequent public health efforts with tremendous disdain and distrust.” And the odds are not stacked in favor of the ban, or a growing number of efforts in other cities to tax sugary beverages, Wansink adds. As evidence, he cites 150 years of economic research that shows “if people really want something, they are going to find a way to buy what they want.”

Despite his previous ABA affiliation, Pearlman agrees. “I don’t think soda should be banned because it’s linked to obesity in kids, because everyone has the right to make choices,” he notes. “If you ban something and people want it, they’ll find a way to get it. It’s better to tax it and use the money towards good, like educating people on the dangers of obesity.”

Some experts argue that bans or taxes could give consumers pause — either due to a raised consciousness about the health risks associated with too much soda, or, in the case of a tax, because the drinks will become more expensive. But others worry that such methods of curbing obesity will have a number of unintended consequences — even hurting low-income Americans, many of whom already suffer from a lack of affordable food options.

“It’s a Catch-22,” says University of Pennsylvania nursing and epidemiology professor Karen Glanz. “The [food] industry, in this case, is selling legal products that we can’t say are ‘all bad,’ as we could say about tobacco…. If [health advocates] don’t team up with the food industry,” and instead continue to just push back at it, “[the industry] will become more committed to undermining health initiatives.”

Unlike the soda ban, levying taxes on sugary drinks serves a second purpose — combating many cities’ budgetary woes. “The good news is that in some ways, sweetened-beverage taxes can help” to mitigate health and budget problems, notes Wharton health care management professor Mark Pauly. But the effect will be limited. The taxes “won’t raise all the money that cities need nor make a major dent in the obesity problem.”

A Sea of Unhealthy Products

Currently, 30 states levy a sales tax, averaging about 5%, on soda purchases. In Richmond, Calif., city officials are taking a different approach: Included on the ballot in November will be a proposed penny-per-ounce excise tax on sugar-sweetened drinks sold, served or otherwise provided by stores, restaurants and other businesses. The proposal is structured as a business license fee, meaning it would be up to merchants to decide how, or if, they would pass the tax on to consumers. If voters approve it, the initiative would be the first of its kind in the U.S., according to The Wall Street Journal. Other cities may follow Richmond’s lead: Most recently, the city of El Monte, Calif., has also placed a soda tax measure on its November ballot.

Opponents of the bills in Richmond and El Monte, led by the American Beverage Association, have argued that the legislation would hurt low-income residents and local businesses, while unfairly targeting only one in a sea of unhealthy products that are for sale on the nation’s grocery and convenience store shelves. According to Reuters, critics have also noted that while obesity rates in the U.S. are going up, overall consumption of full-calorie soda has declined.

According to Kelly D. Brownell, director of the Rudd Center for Food Policy & Obesity at Yale University, an excise tax would conceivably affect the sticker price of sugary beverages, which could make it more effective than a sales tax at reducing consumption. “With a sales tax, you don’t get to see the added cost until you get to the cash register,” says Brownell, who, in a 1994 op-ed in the New York Times, was one of the first to bring the idea of a tax on unhealthy foods into a public forum. However, Glanz notes that “whether the tax actually achieves a reduction in sugary soda purchases may depend on how it is implemented.” Facing pressure from the beverage industry, retailers may purposely undermine the taxes — for example, by passing them on through increased prices for vegetables or other staples while keeping the price of sugary drinks low. “I don’t think the laws would [include] any accountability to the public or government as to how they recover the ‘back-end tax,'” she says.

The American Beverage Association has spent millions to fight soda taxes proposed across the country. In Richmond — which, along with El Monte, has one of California’s higher rates of obesity in children — the ABA has funded billboards criticizing the bill and pledged to spend more to fight its passage, Reuters reported. The group is backing a lawsuit in El Monte that challenges the language of that city’s proposed soda tax.

But big beverage companies — many of them multinational firms with diverse product lines — may have less to fear from taxes or bans on soda than their efforts to fight them might indicate, according to Wharton finance professor Robert Inman. “If I’m Pepsi, and if you start taxing soda, I will produce non-sugary drinks like water,” Inman states. “How many [net] jobs were lost because of cigarettes? Phillip Morris bought Frito-Lay and sold cigarettes in Africa.”

What is the difference between an excise tax and a sales tax and why do some people feel an excise tax is more effective in reducing consumption of sugary beverages?

Has your school removed soda and sugary drinks from its vending machines? If so, what do you think about that? If not, should they? How might you help/prevent this effort?