He’s got a passion for smoked paprika and buffalo wings and a fighting spirit that was shaped growing up in Camden, N.J. Food Network fans know him as Big Daddy -- a.k.a. Aaron McCargo, Jr., winner of "The Next Food Network Star" reality TV show in 2008. The star of "Big Daddy’s House" cooking show talks with Knowledge@Wharton High School about big appetites and even bigger career goals on and off camera.…Read More 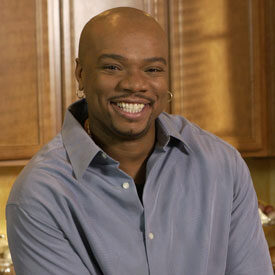 Aaron McCargo, Jr., competed on and won The Next Food Network Star reality TV show in 2008. He went on to star in his own Food Network show, Big Daddy’s House, a cooking show that features his flair for recipes with big, bold flavors. McCargo talked with Knowledge@Wharton High School about growing up on the mean streets of Camden, N.J., and turning his love for food into a successful career.

Knowledge@Wharton High School: When did you first discover your passion for cooking?

Aaron McCargo, Jr.: I used to be intrigued by pictures of food when I was 4 years old and eventually started playing around in the kitchen. I was also a greedy kid. There were eight of us in our family — two sisters, four brothers and my mother and father — and I was always looking for someone’s leftovers. I had to do something to take care of this big appetite of mine.

KWHS: What was it like growing up in Camden, N.J., a troubled city with the highest crime rate in the U.S.?

McCargo: Growing up was tough for me because the drug gangs were coming in big-time. The school I went to had all sorts of turf wars – South Camden against North Camden and East Camden against Parkside. If you were in the wrong part of town, you got a whoopin’. Every day of middle school for three years I ran home from North Camden just to cross the 7th Street bridge because I knew they wouldn’t cross that bridge. These were 17- and 18-year-olds torturing us 11- to 13-year-olds. On top of that, I was a guy who wanted to cook walking home with my Rice Krispie treats. These kids didn’t have any role models in life. I watched my mom and dad work and provide for us. I graduated from Camden High School in 1989.

KWHS: When did your love of food become a career choice?

McCargo: I realized I loved to learn about food in 6th grade home economics. When I got to high school, I had a side job at a pizza place and then I worked at a wholesale place called Katz. I wasn’t cooking, but I was learning the business of food. Came graduation day, my mom asked me my plans and said, ‘You’re either going to live here and work or you’re going to go somewhere else because you have to do something with your life.’

My high school buddies helped me find the Academy of Culinary Arts at Atlantic Cape Community College near Atlantic City. I moved there the day after graduation with $300 savings and got a job cooking at McDonald’s. McDonald’s was the most instructional job I ever had about how to work in a restaurant. I went on to work in several more casual and fine-dining restaurants. When I tried out for the show, I was the executive VIP catering chef at Thomas Jefferson University Hospital in Philadelphia.

KWHS: What was it like being on The Next Food Network Star?

McCargo: It was tough being in a house with nine other people you know nothing about, but I got lots of support from my wife and kids and family. I stuck to my game plan of big, bold flavors. I didn’t let anyone intimidate me. That’s where Camden came in. I got picked on enough from 6th to 12th grade; I wasn’t going to let it happen in New York.

KWHS: What skills do you need to be successful as a chef?

McCargo: You have to be passionate about food. You also have to have your own style. You can copy off someone, but eventually you’ll get bored and frustrated because it’s not your own. Take advantage of the knowledge of the good chefs around you; don’t think you know everything. And you’ve got to want to cook whether there’s a $10,000 or $2 paycheck at the end of the day. It’s about pleasing people’s palates.

KWHS: Do you love being a TV star?

McCargo: Being on TV is fun, but it is work. You have to test your recipes and have a story behind them. When I stand before that camera, I’m thinking, ‘Who is out there watching that I really need to make smile or have confidence to go into the kitchen.’ It’s about sticking to what you know. I’m not on there making poached lobster with truffle butter. I’m showing the average cook that if you get a rotisserie chicken and some buffalo sauce and cheese, you can make buffalo chicken cheese balls. Stay in your lane and be as creative as you can be.

0 comments on “The Flavor of Bold: Aaron McCargo, Jr. Dishes about Life Before and After “The Next Food Network Star””

1 Pings/Trackbacks for "The Flavor of Bold: Aaron McCargo, Jr. Dishes about Life Before and After “The Next Food Network Star”"

Ken Tokusei Talks Technology and Ping-Pong from Inside Google Japan