As California’s Golden State Warriors professional basketball team moves its way through the NBA playoffs after finishing off a remarkable regular season, KWHS takes you behind the scenes with Daniel Brusilovsky, the team’s digital initiatives lead. Brusilovsky, a teen tech whiz who now, at 22, has landed a "dream" job with the Warriors, explains beacon technology and why it’s important to start learning and doing.…Read More 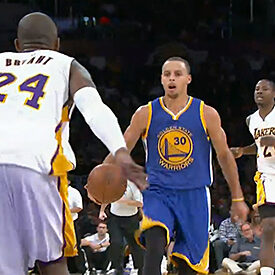 Imagine going to see one of your favorite sports teams play. As you enter through the doors of the arena, you receive a message on your phone welcoming you to the stadium. Walking past the concessions stand, you get another message alerting you to a special deal for fans: spend $20 and get free peanuts; spend $100 or more and get a free hat. Riding the escalator up to your seats, another notification pops up: Click here to upgrade your seats. Sound like the wave of the future? It’s happening now for teams like the Golden State Warriors professional basketball team through the use of beacon technology.

According to Daniel Brusilovsky, the Warriors’ digital initiatives lead, this type of technology offers the potential to reach fans right where they are with specific contextual messages. Fans who have the Warriors’ app installed on their phone receive location-specific messages via Bluetooth and Wi-Fi systems as they move through Oracle Arena in Oakland, California. This is just one of the ways Brusilovsky and others are working to connect with fans both inside and outside Warrior Grounds. In many ways, Brusilovsky and his digital team are test-driving the latest technology. The basketball team plans to open a new 12-acre, high-tech sports and entertainment complex in San Francisco in 2018.

The Warriors are one of the first professional sports teams to adopt the use of beacon technology. Brusilovsky says the team’s location in the heart of Silicon Valley makes it more willing to experiment with new technology and involve fans in the process. [tweetthis alt=”” hashtag=”” url=””]“We’re testing a lot of technology, and we probably have the best fans to do that with,” [/tweetthis]he says.

If his name sounds familiar, that is because Brusilovsky, 22, is no stranger to Knowledge@Wharton High School – or California’s Silicon Valley technology scene. He has founded and worked with several start-ups since his early teens, most notably launching Teens in Tech, a social network and conference to encourage young entrepreneurs in the technology space. He put that endeavor on hold last April to accept the job as the digital initiatives lead for the Warriors.

A lifelong sports fan himself, Brusilovsky says he is now in his dream job. “I’m a huge Warriors fan,” he says, “I grew up watching this team. I love the team and sports in general.”

When his good friend, Kenny Lauer, was recruited to be the Warriors’ vice president of digital and marketing, Brusilovsky was brought on to oversee the non-day-to-day parts of the team’s digital portfolio, such as ways to incorporate new technology, and how to enhance the fan experience both in and outside the arena through technologies like beacons, virtual reality, social media and more. “There are many die-hard fans [not at the game], and we can’t ignore them,” he says. “How do we use technology to create the best experience for them, even if they’re at home?”

Brusilovsky notes that the Internet is at a pivotal point with net neutrality — the idea that Internet service providers (ISPs) should treat all data that travels over their networks equally — and technology where it is becoming an enabler for users. “There’s a gray area where people want to experience a live event, but they also want to capture, engage and share it,” he says.

Brusilovsky has been around technology for as long as he can remember. Born and raised in San Francisco, both his parents worked at tech companies and his father taught him about computers from an early age. After tagging along to his dad’s tech-company job after school, Brusilovsky landed a paid internship at the company. He learned the basics of setting up servers, employee computer and phone systems, and creating HTML and CSS-based websites.

After listening to technology broadcasts by Leo Laporte, Brusilovsky became interested in podcasting, and thus found his way into his first entrepreneurial venture — creating them. Through his podcast, he circulated in the technology community and landed another internship at the live mobile video-sharing company called Qik (later acquired by Skype).

He then began noticing that he was the youngest person in the room at these major tech events and decided to put together a conference for young people interested in technology.

Established in 2008, Teens in Tech began first with a conference and expanded to include an incubator for start-ups. “I wanted to meet other people like me,” he says of starting the venture, noting that not everyone grows up with exposure to the opportunities in Silicon Valley, and this conference was a way to make technology entrepreneurship accessible to teens across the country. Brusilovsky promises some exciting news about Teens in Tech in the coming weeks.

Following his work with the conference, Brusilovsky spent time at other tech agencies, a venture capital firm and a start-up focusing on online payments before working with the Golden State Warriors.

Passionate about technology entrepreneurship, Brusilovsky says the best way to get started is to [tweetthis alt=”” hashtag=”” url=””]“get your laptop and start learning how to code,[/tweetthis] read about trends, start familiarizing yourself with the field — put yourself in a position where you can succeed.”

“Start talking with people in the community, start learning how to code, take those first few steps to make sure you are set up properly,” he says. “Everyone has an app idea, but how many people can turn it into a mockup or reality? Start learning how to design, learn about venture capitalism and how to make money, how to pitch to VC firms. If you say you’re going to do something, actually do it. Start learning and doing something.”

While he foresees a long future with the Golden State Warriors, Brusilovsky says he can see himself working on another start-up down the road. He recently co-founded imoji, an app that turns any picture into a shareable emoji, or picture you can text.

“I’m an entrepreneur at heart; always thinking of ideas whether they are stupid or crazy or whatever,” he says. [tweetthis alt=”” hashtag=”” url=””]“I’m really excited that I live in an amazing place where people don’t always think I’m crazy for coming up with these ideas.”[/tweetthis]

In his new job with the Golden State Warriors, Daniel Brusilovsky is combining his love for technology with a passion for sports. What does this tell you about your own skills and interests and how they influence career choice?

Are you a sports fan? What conversation might you have with Brusilovsky to suggest ways you feel technology could enhance your experience as a fan? Log on and share those ideas in the comments section of this article. Daniel wants to hear from you, and may even respond!

At one point in the story, Brusilovsky says, “If you say you’re going to do something, actually do it.” Think a minute about the difference between dreaming and actually implementing. Ideas are exciting but they are even better in practice. What holds us back from acting on our inspirations? Do you have an idea that you would like to follow through on? Share it with a partner and plan together how you might make it a reality.