Why It Pays to Save: Knowing the Time Value of Money

Have you given any thought to financial security? A few basic concepts related to the time value of money can help you fatten your future bank account. High school students from around the country discuss compound interest, discounting and the Rule of 72. Bottom line: The sooner you start saving, the better.…Read More 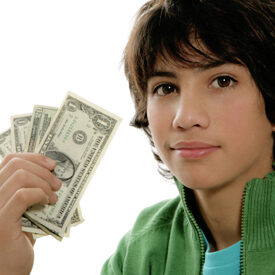 McKenna Klein, 16, has been saving up money since the age of 11. That is when he got his first lawn-mowing job in a park near his home in suburban Denver, Col.

Klein still mows lawns and now tutors neighbors in math. He keeps part of his earnings in a savings account while also investing in stocks. It is important to save promptly, says Klein, a junior at Regis Jesuit High School in Aurora, Col. “Any money that is invested in the present is worth more than in the future because of the interest,” notes Klein, who this summer attended an investment camp sponsored by the Future Investor Clubs of America in Orlando, Fla.

The Earlier, the Better

This rule is a basic principle of finance known as “the time value of money.” It means that “the earlier that you start saving, the better it is for your future,” says James Roan, 17, a senior at William H. Turner Technical Arts High School in Miami, Fla., who worked as an intern at the investment camp this summer.

“Savings accounts can even earn interest on interest through the power of compounding. Say I put $1,000 in a savings account that earns 5% a year in compound interest,” says Roan. “The next year I get interest on both the $1,000 and the 5% interest that I already paid.”

Banks are hardly paying 5% interest in today’s weak economy. Many accounts now pay less than 1%. “Can you even consider it interest when rates are so low?” asks Nyssa Cederstrom, 15, a sophomore at George C. Marshall High School in Falls Church, Va.

Passbook interest rates for savers have been on a downward trend since the mid-1980s when they averaged just over 5%, according to bankrate.com, a site that has financial rate data and personal finance information. By 2000, this basic rate for savers had slipped to less than 2%.

But Cederstrom hasn’t given up on interest entirely. She is learning to invest in stocks and bonds and puts any profit that she makes into a savings account. “I’m still earning interest even though it’s low,” says Cederstrom, another investment camper. “It’s like rebuilding money.”

Here are some key points to keep in mind about the time value of money:

Future value. This is what money would be worth after a given number of years at a given interest rate. The future value of $1,000 is $1,500 under simple interest in the example above, and $1,628 under compound interest.

Present value. This shows what money in the future would be worth today based on a given interest rate. If you were to receive $1,000 a year from now, and the current rate of interest was 5%, the money would have a present value of just $952.38.  That’s the amount that would grow to $1,000 in a year if you invested the money today at a 5% interest rate.

Concepts like the time value of money and compound interest are so basic that they are easy to overlook. “Most teens don’t understand the power of compounding and are not worried about financial security,” says Klein. “But a modest investment now could result in tens of thousands of dollars — or even hundreds of thousands of dollars — 20 to 30 years from now, and that would be quite remarkable.”

Why should you embrace this “time value of money” concept? Do you save? Do you invest? What does this article help you to realize about the power of money, other than spending and buying things?

One comment on “Why It Pays to Save: Knowing the Time Value of Money”

Future of the Business World: Two Innovators Take Us Inside the Entrepreneurship Journey