Pandora.com allows listeners to create their own online radio stations based on personal musical tastes. The company, which recently started trading its stock on Wall Street, is busy navigating the market and the often-challenging virtual music industry. Can it survive the stream of competitive and fiscal pressures?…Read More 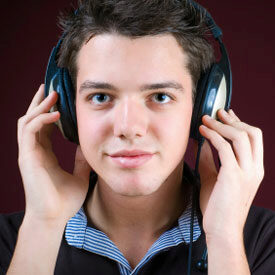 Have you ever listened to a song and had the feeling that you have heard it somewhere? You don’t recognize the band name or the song title, but the tune is familiar. Then you realize, “This sounds like a weird version of ‘Teenage Dream’ by Katy Perry!”

What you are hearing is a song that has a similar fabric – or DNA – to Katy Perry’s dance sensation. The two songs have shared characteristics like melody, harmony, rhythm, instrumentation and/or vocal performance.

This concept of related tunes has fueled the rise of Pandora Radio, one of today’s most well known Internet radio stations. Pandora Radio takes information from a song’s DNA and matches it with other similar songs to create a station based on your personal tastes. For example, if you create a Kanye West radio station, your first song may be “Gold Digger,” and the next could be Lupe Fiasco’s “Superstar.” Listeners can either get a free Pandora Radio subscription supported by advertisements or a fee-based subscription without ads. A free account user may reach the streaming limit of 40 hours per month and pay 99¢ to continue unlimited streaming.

Pandora hit the business world charts in the past few months when its parent company, Oakland, Calif.-based Pandora Media, began trading on the New York Stock Exchange on June 15, 2011 through an initial public offering (IPO). When a company first issues shares to the public on the stock market, it begins with an (IPO) – an opening price for the stock. An IPO helps a company determine how much the stock is worth at that particular moment, and it allows the company to raise needed capital for expansion or other projects. It is also an opportunity for people in the company who own private shares to finally cash in and make some money. Pandora’s stock opened at $16 a share and soon rose to $26 a share, much higher than analysts expected.

Pandora’s IPO and others prompted some analysts who watch the technology stock market to speculate that another tech stock bubble – like the one that burst in 2001 after lots of dot-com stocks debuted at overinflated prices and later tanked — is in the making. However, Pandora – whose stock price has since leveled off at between $12 and $13 a share — went public to raise much-needed money to build its business.

According to a March 2011 article in Fortune magazine, Pandora raised money through an IPO “to pay for licensing fees and to make acquisitions.” Added Tom Conrad, Pandora’s chief technology officer, on the company blog: Going public “allows us to do even more of what we’ve been doing and to bring even more resources to bear on our mission of enabling people to enjoy music they know and discover music they love.”

Capitalizing on the hypothesis that if you like one song, you will like listening to a song with similar attributes, Will Glaser and Tim Westergren developed the Music Genome Project in 1999 to classify songs based on, according to Westergren, their “most basic building blocks.” Using this musical DNA technology as a competitive edge in the online radio market, Glaser and Westergren collaborated with Jon Kraft to found Pandora Media in 2000. Competitors include The Hype Machine and Grooveshark.

Pandora’s user base has grown steadily – from 43 million registered users in 2009 to some 90 million in 2011 — in part through strategic partnerships with the likes of Ford Motor Company and Research in Motion, maker of the Blackberry. During the July 12 Pandora Analyst Day in San Francisco, Jessica Steel, the company’s executive vice president of business development, stressed Pandora’s focus on accessibility. “Our goal is to allow people to personalize their radio experience anytime, anywhere,” she writes in the Pandora Radio blog. “Nearly 50% of radio consumption happens in the car, so it’s a natural venue for Pandora. We want to make the experience as easy in the car as it is at home, at the office, and on a mobile phone.”

Still, Pandora faces challenges. The company loses 70% of its revenue to royalties paid to the musicians it features, and according to the Wall Street Journal: “Pandora has lost roughly $20 million over the last two years despite recently topping a mark of 90 million registered users.” Consequently, Pandora has increased its number of ads — an annoyance to many listeners — which now make up 90% of its sales.

Listeners are not always satisfied with other aspects of their Pandora experience. Some high school students say that Pandora does not give them enough control over their music. Ishan Gosain, a sophomore at Upper Darby High School outside Philadelphia, Pa., has an app for Pandora on his iPhone, but he claims he doesn’t use it that much: “There’s a playlist for an artist, but then a song comes on in a completely different genre.” Sakiniah Sutton, a junior at J.W. Hallahan Catholic Girls’ High School in Philadelphia, agrees, noting that listeners are given only a “certain amount of skips,” meaning she cannot bypass certain songs she may not like.

Pandora also feels pressures within the virtual music world. Its biggest emerging competitor is Spotify, a Swedish music-sharing site launched in the U.S. on July 14, 2011, that offers the same services as Pandora at a small fee. Spotify users can choose between a $5 or $10 per month package and avoid advertisements. Unlike Spotify, Pandora cannot expand abroad because of licensing agreements.

Still in development stages, Apple plans to launch the iCloud, a new technology that would revolutionize the storing and sharing of data. Instead of storing information on devices like your computer or iPod, everything (music, pictures, e-books, etc.) will be stored online, making devices secondary. With your whole iTunes library already available in the virtual “cloud,” you could always listen to exactly what you want. Why suffer through advertisements on Pandora?

With the music industry chipping away at profits from one side and competitors quickly gaining momentum on the other, Pandora will need to use its musical DNA advantage to innovate. According to Westergren, who commented in March to the Wall Street Journal, the future will bring “a much bigger layer of musicians making a living at their craft” and they will turn to resources like Pandora “to identify and attract fans.”

86 comments on “Pandora: The Building Blocks of an Innovative Internet Radio Station”